JobKeeper billions for businesses that avoided worst of pandemic hit

The federal Treasury has revealed $27 billion of the $89 billion JobKeeper program went to businesses that did not suffer as much as they feared because their sales rose or fell more modestly than they forecast in the depths of the coronavirus pandemic.

In a report into the scheme released on Monday, Treasury found that although money had gone to businesses that did not meet the test of a 30 per cent or 50 per cent fall in their turnover, JobKeeper had been instrumental in saving millions of jobs and setting up the economy for a strong recovery. 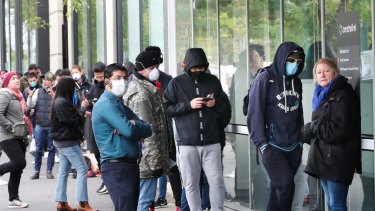 JobKeeper helped keep many Australians off welfare support through last year’s lockdown, but a new report shows $27 billion went to businesses that did not meet the scheme’s eligibility requirements.Credit:Jason South

JobKeeper, a wage subsidy program worth $1500 a fortnight per employer, was the largest element of the federal government’s response to the pandemic as businesses across the country were forced to close due to COVID-19 lockdowns.

It has come under fire for the amount of money that went to companies that reported an increase in their revenues through the pandemic.

The Treasury analysis found the program had acted to both support businesses through the depths of the pandemic, delivering vital financial support to millions of people who otherwise would have lost employment, while also setting up the country for a strong recovery.

“In the first six months of the program, JobKeeper went disproportionately to more productive businesses, particularly ones that were financially fragile and which may have had difficulty surviving a period of reduced revenue during restrictions,” it found.

“This analysis does not, however, indicate whether businesses were adversely affected by
COVID-19 restrictions,” Treasury cautioned.

Of the $13.8 billion that went to businesses with an increased turnover, at least $4.9 billion went to growing businesses or those that had changed their structure.

These businesses were allowed to use a test other than a fall in turnover, with Treasury arguing this had helped these operations.

“JobKeeper payments to these businesses were important to offset the impact of COVID-19 restrictions on their operations and avoid labour shedding,” it said.

The remaining $8.9 billion went to firms with higher turnovers than a year earlier. They employed about 480,000 people.

The average businesses that did not meet the 30 per cent or 50 per cent forecast in turnover supported four people.

Treasury said JobKeeper directly affected businesses most at risk from the restrictions imposed due to the pandemic. The job separation rate at businesses receiving JobKeeper almost doubled due to pandemic restrictions but was largely unchanged for other businesses.

Half of the people employed in the arts and recreation industry and 35 per cent of those in the accommodation and food services industries were supported by JobKeeper payments.

Treasurer Josh Frydenberg said the report proved the importance and effectiveness of JobKeeper.

“The report demonstrates that JobKeeper was more than just a wage subsidy. It was designed to ensure the strongest possible economic recovery and avoid the scarring impacts on the labour market, which were characteristic of previous recessions,” he said.

“Treasury’s report on the first six months of JobKeeper clearly demonstrates that the program did what it was intended to do. It kept employers and employees connected. It saved more than 700,000 jobs and it supported Australia’s world-leading economic recovery.”