Khloe Kardashian Calls Out 'Fake' Trolls After Reuniting With Tristan

Not here for the haters. Khloé Kardashian took aim at “fake” trolls after she was spotted at a party with on-off boyfriend Tristan Thompson.

Khloe Kardashian Through the Years: Reality TV, Motherhood and More

“HA! Some of y’all really just make up anything and swear it’s the truth as if you know what’s going on,” the reality star, 36, tweeted on Saturday, August 28. “The truth is never good enough… or juicy enough. So you create a narrative that fits what you choose to believe.”

When a supportive follower reminded Kardashian not to pay too much attention to “miserable f–king internet trolls,” she replied, “It is so old at this point. It’s always something about people creating fake s–t about me and actually terrorizing me about something THEY ARE CREATING. Without anyone knowing any facts. It’s some weirdo s–t.” 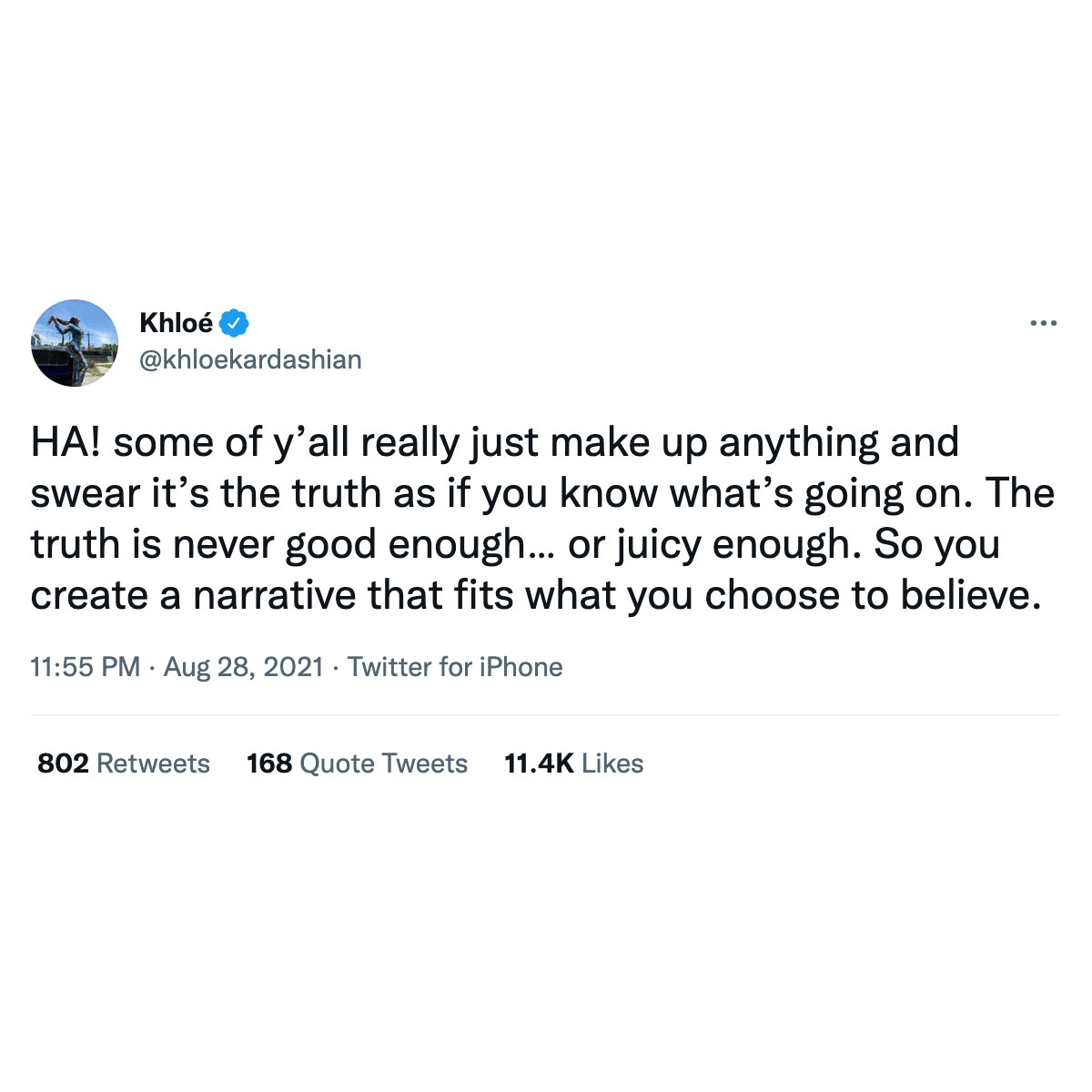 The Good American cofounder went on to call out the “pathetic” and “infuriating” comments being made online about her personal life, adding that “believe it or not,” what’s shown on TV isn’t the whole story.

“If only more people actually spread kindness, positivity and compassion,” the California native continued. “I’ll never understand why people take their time to be cruel. They spend their energy saying horrible things as opposed to maybe nothing at all or uplifting somebody else.”

Plenty of fans came to Kardashian’s defense, encouraging her to take a step away from social media and focus on the positives in her life. “My mental health needs it,” she responded.

The former Keeping Up With the Kardashians star’s clap back came shortly after she and Thompson, 30, spent time together at a birthday bash for LeBron James‘ wife, Savannah James. According to TMZ, the Revenge Body alum and the Canadian athlete didn’t arrive together and left separately at the end of the night.

Us Weekly confirmed in June that the twosome, who share 3-year-old daughter True, called it quits. At the time, an insider noted that the pair “remain amicable” and “there was no drama” leading up to the breakup, telling Us, “Things just didn’t work out.”

Kardashian began dating the NBA player in September 2016, but their relationship came with ups and downs. Shortly before True was born in April 2018, Thompson was caught cheating on his then-pregnant girlfriend with multiple women. Though they stayed together in the wake of the scandal, they parted ways in February 2019 after the former Cleveland Cavaliers star kissed Jordyn Woods.

In August 2020, Us confirmed that Kardashian and Thompson were giving their romance another try after spending time together amid the coronavirus pandemic.

“Khloé is hopeful that Tristan has changed for good and will continue to grow and be the great and loyal partner that he has been throughout their time together during the quarantine,” a source revealed at the time, adding that the pair “would love to give daughter True a sibling.”

Before their recent split, the Strong Looks Better Naked author got candid about the long road to baby No. 2 during the final season of KUWTK, even asking Kim Kardashian for advice on surrogates.

“I’m gonna need you,” she told Thompson during a February episode. “We have to line it up with your schedule so I can make embryos with my frozen eggs. … I think I’m ready to do the whole pregnancy thing again. This process might take time. I have no idea. I want to be prepared.”