Retired Australian entertainer Jeanne Mitchell, better known as Jeanne or Jeannie Little, has died at the age of 82. 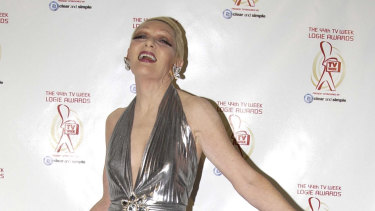 Jeanne Little at the 2002 Logies in all her glory.

Little entertained millions of Australians as a TV personality between 1974 and 2009 – the year she was diagnosed with Alzheimer's Disease.

She made her name on The Mike Walsh Show and in 1976 won a Gold Logie for most popular television personality.

She became known for her bubbly personality, wild fashion sense and her "hello darling!" catchphrase.

Her daughter started the Jeanne Little Alzheimer's Research Fund to raise money for the research institute NeuRA, which aims to cure diseases of the brain. 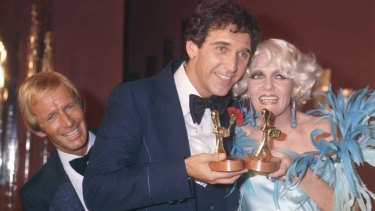 Paul Hogan, Don Lane and Jeanne Little at the Logies in 1977.Credit:Katie Little

"Mum always poured so much energy into supporting many, many charities for which she was awarded an Order of Australia," she said at the time.

"She had huge compassion for people and was always trying to lift people’s spirits and inspire them to make a difference.

"I know she'd love this research fund and would be thrilled to know she's still helping people even when she can’t get out there and do it herself.

The most important news, analysis and insights delivered to your inbox at the start and end of each day. Sign up to The Sydney Morning Herald’s newsletter here and The Age’s newsletter here.

END_OF_DOCUMENT_TOKEN_TO_BE_REPLACED

END_OF_DOCUMENT_TOKEN_TO_BE_REPLACED
Recent Posts
We and our partners use cookies on this site to improve our service, perform analytics, personalize advertising, measure advertising performance, and remember website preferences.Ok