The 68-year-old Northern Irish actor has been in hotel quarantine in Sydney since arriving last Saturday, and is due to fly to Melbourne this weekend to commence work on the $43 million film Blacklight which is written, directed and produced by Ozark co-creator Mark Williams. 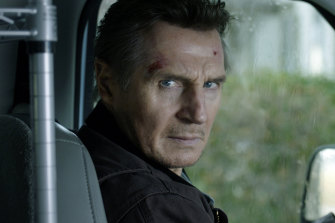 According to a brief description issued by the production, Blacklight is a thriller "about a troubled off-the-books fixer for the FBI tasked with pulling undercover agents out of dangerous situations" who finds himself embroiled in a conspiracy that goes right to the top.

In other words, it’s a Liam Neeson action movie.

The film is the latest production to be lured to Australia under the federal government's $400 million location incentive scheme, which tops up the 16.5 per cent tax offset available to foreign productions to an effective 30 per cent of local expenditure.

Arts Minister Paul Fletcher said the federal government would contribute $5.8 million to the production, which was expected to create more than 500 local jobs for cast and crew, as well as 550 roles for extras.

"Blacklight will bring momentum back to the Victorian screen industry, which has been so heavily impacted by COVID-19," Minister Fletcher said.

Mr Williams, who also directed Neeson in the recent thriller Honest Thief, said he considered shooting in the US, Canada and Australia but ultimately was swayed by Australia's success in managing the coronavirus.

Having opted for Melbourne as a location to double for an as-yet-undisclosed North American city, he "watched with a certain amount of apprehension" as the city endured a second wave of infections, but never lost confidence.

"I'm very friendly with the movie gods, so I had faith in the situation," he said. "I arrived in Australia a couple of months ago, and when I got out of quarantine and went walking around Sydney I was shocked at how many people were out and about without masks. I've been in Melbourne for the past month, and all the masks here make me feel much more comfortable, not just for our production but for everyone else in the city too."

The production will utilise LED screen technology similar to that used in Disney's The Mandalorian. Ordinarily, a film of this scale would be based at Docklands Studios, but that facility is fully booked already.

Blacklight will instead become the first film to use the Melbourne Convention and Entertainment Centre as a studio, a task to which it is reportedly well-suited. 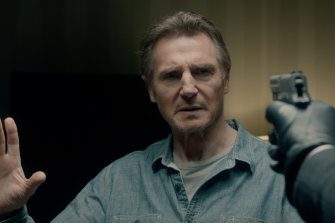 Two weeks in quarantine will no doubt just be the first of the many obstacles Neeson will face in Blacklight.Credit:Rialto

Making a film under COVID conditions is a far tougher ask, with one source close to the film suggesting it could add as much as 30 per cent to the bottom line. It is also impossible for film and TV productions to get COVID insurance, meaning the costs of any shutdown due to illness would be borne by the production (as a foreign film, Blacklight is not eligible for cover via the federal government's $50 million Temporary Interruption Fund, which is designed to cover precisely such scenarios).

Despite the challenges, Mr Williams said it was vital for independent productions like his "to prove these things are doable".

"You can't get insurance, you can't get a bank loan, you're in trouble if someone gets sick," he said. "Everybody's trying but the virus doesn't care. Making this film is about showing we can get back on track in spite of all that."

END_OF_DOCUMENT_TOKEN_TO_BE_REPLACED

END_OF_DOCUMENT_TOKEN_TO_BE_REPLACED
Recent Posts
We and our partners use cookies on this site to improve our service, perform analytics, personalize advertising, measure advertising performance, and remember website preferences.Ok