Mariella Frostrup says: I'm 60 next year but I still feel 38

She’s a stylish inspiration for midlife women. Now, in a joyously frank interview to mark our serialisation of her book on surviving the menopause, Mariella Frostrup says: I’m 60 next year but I still feel 38 (So it’s lucky my husband’s so fit!)

Quite a few things dried up when Mariella Frostrup hit the menopause. I’m talking about her coveted hotlines to borrow (or buy for a snip) gorgeous couture clothes at leading fashion houses.

She thinks it’s no coincidence that the piecemeal erosion of her discount ended entirely when she hit her 50s.

‘These days, designers only seem to want 18-year-old influencers wearing their clothes,’ she says. ‘But they ignore the “silver” influencers at their peril, because we keep lots of industries afloat. Women my age don’t want to wear clothes a teenager is modelling.’

She concedes that she doesn’t go to many posh frock events these days as she shuttles between her London flat and the family home in Somerset, ‘and if you stop phoning Prada to borrow clothes you fall out of the loop’. 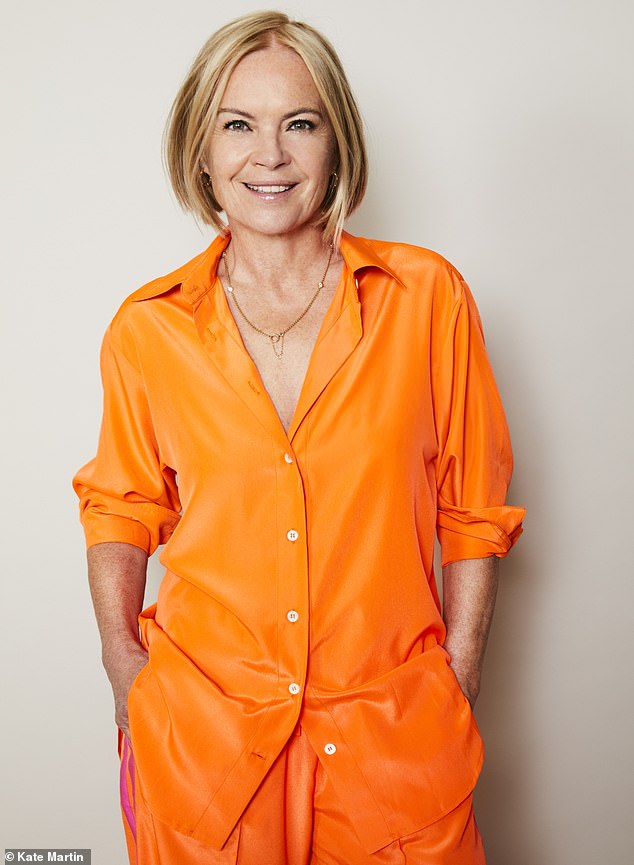 Mariella Frostrup, 58, (pictured) who lives in London, gives a frank and informative account of the menopause in a new book

Still, labels headed by women — such as Alice Temperley and Stella McCartney — have remained loyal as she’s progressed through her 50s.

‘It’s not headline material that we have a very bad attitude to ageing in this country,’ she laments, ‘but I think that’s changing. It’s a very good time to be a woman my age — although I still had to fight against the expectation that I’d just slither off and place myself out of view.’

I can’t help thinking those frock designers are missing a trick. Writer, broadcaster and mum to two teenagers, Mariella, 58, is as professionally busy as ever.

Her new book, serialised in the Mail all this week, is as frank, funny and informative an account of the menopause as you’d expect from a woman whose rackety youth — she once partied for four days non-stop at Cannes with George Clooney — segued seamlessly into motherhood, vibrant middle age, a place on the Booker Prize judging panel and now a presenting slot on Times Radio.

Glamorous, whip-smart and cool, she looks, frankly, fabulous. Who wouldn’t choose her as an exemplum of all that is successful and stylish about over-50s women?

Her lustrous, honeyed bob is coloured at her home in Somerset by a woman who just pops in, dollops on the dye and scarpers, leaving Mariella to set a timer then rinse it out herself.

(Take note, all busy mid-lifers: this hack should surely catch on in salons with working mums who don’t have hours to sit idly while their colour takes.)

While she strives to look her best, she isn’t vain. She has the sort of fresh complexion it’s impossible to replicate with treatments. When she smiles, there are laughter lines round her tawny eyes. Only her forehead furrows have been obliterated by occasional Botox. 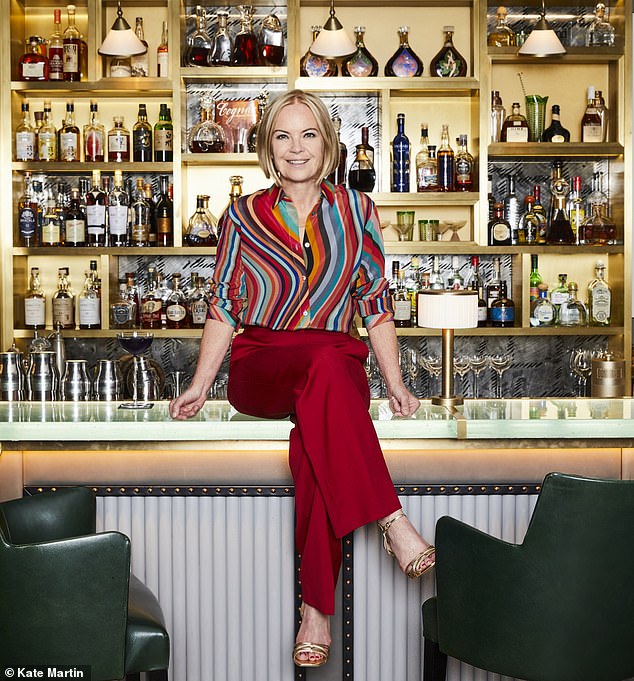 Mariella (pictured), who was 41 when her first child, Molly, now 17, was born, believes her metabolism changed after having kids

‘I don’t want to look angry, and Botox fixes those deep lines on my forehead,’ she says. ‘I tend to squint a bit, especially when I’m reading. The other wrinkles I don’t care about.’

She succumbed just once to having hyaluronic acid injected into six points on her face. Were the effects noticeable? ‘Not really.’ She hasn’t been back.

‘It’s time-consuming and you have to maintain it. I don’t want to look younger — just the best I can for my age. Besides, it would look really freaky if I didn’t have any wrinkles.’

Today, she says she looks at photos of her younger, plumper-faced, smooth-skinned self and thinks: ‘Ooh, I didn’t have any wrinkles but I definitely had emotionally fluctuating weight issues.’ Now, she’s effortlessly slimmer — oh, the injustice of it! — than she was at 25.

‘When I had the kids [she was 41 when her first child, Molly, now 17, was born] I think my metabolism changed. Maybe I was racing round more and it sped up.’

Mariella rushes in to our breakfast chat in a London coffee bar — heads still swivel when she arrives — and it’s hard to credit that she turns 60 next year. 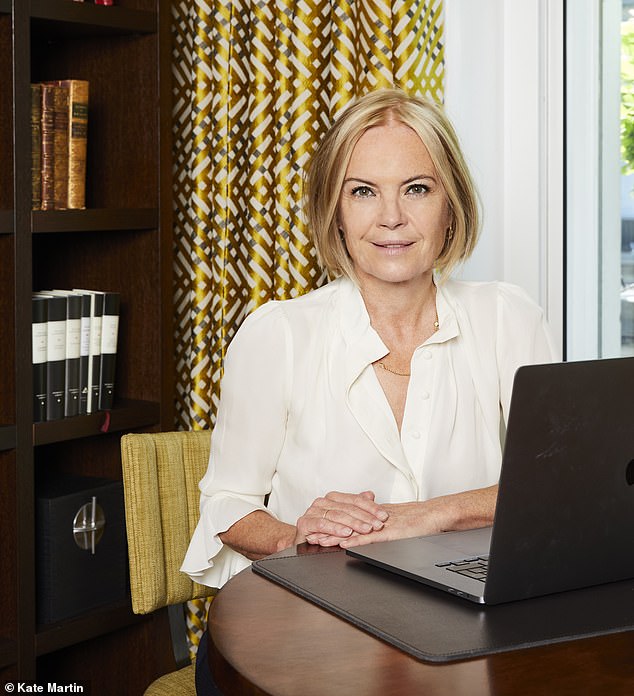 She remains in our memories as TV’s sexy Scandinavian. But she actually moved from her native Norway to Ireland aged six and grew up in a tiny village in County Wicklow. She fled Dublin after the premature death of her alcoholic father, arriving in London aged 16, with £15 and her possessions in a bin bag to live in a squat and work her way up in the music industry.

She coordinated the publicity for Live Aid in 1985, before landing her first TV gig: presenting the Channel 4 music show Big World Cafe in 1989.

‘It’s quite unusual not to have taken drugs if you’ve worked in the music industry,’ she says crisply when I quiz her.

‘I was young and experimenting. But the good sense comes from knowing it’s not the path to a productive, healthy life.’

I wonder how she’d feel if Molly followed a similar path and left home. She looks stricken.

‘The idea of her being on her own in London is horrifying!’ she cries. Her husky, sultry contralto — voted the sexiest voice on TV in 2005 — remains unchanged by the passing years.

‘I think of her as being like one of those tiny baby turtles who have to avoid predators when they make the most dangerous walk of their lives from the beach to the ocean.’ 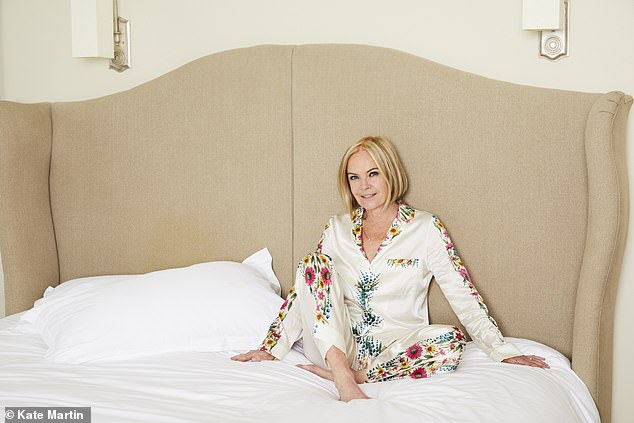 Mariella (pictured) who had her children in quick succession in her early-40s, admits the thought of them flying the nest makes her feel physically sick

Mariella had her children in quick succession in her early-40s (son Dan is now 15), and contemplates their exodus from the family home with overwhelming sadness.

‘I feel physically sick at the thought of them flying the nest,’ she says, ‘I just so enjoy having them in my life. It feels such a short period of time that I’ve had them to myself.’

There is the solace of her long marriage to husband Jason McCue — they’ve been together for 20 years, and she talks about him with the sort of jokey fondness that comes from years of familiarity.

She does not feel her age — ‘In my mind I’m still 38’ — but I wonder if the fact Jason, a human rights lawyer, is seven years her junior is now starting to tell.

On the contrary, she insists. ‘He’s definitely older than his years. Until recently, he was a bit overweight and drank too much.

‘Now, since the pandemic, he’s gone action-mad. He runs seven miles a day. It’s exhausting looking at him setting off for his run.’

The talk wanders to sex: has Jason’s new-found fitness made him friskier in the bedroom? Mariella laughs.

‘It would be extremely indiscreet of me to talk about that,’ she says with finality. ‘Poor Jason!’

But she concedes that time must be set aside for intimacy.

‘We talk about relationships in terms of instinctive passion and romance, but a long-term relationship needs quite a lot of work. Sex is a baseline requirement, I think, and you should make an effort with it.’ 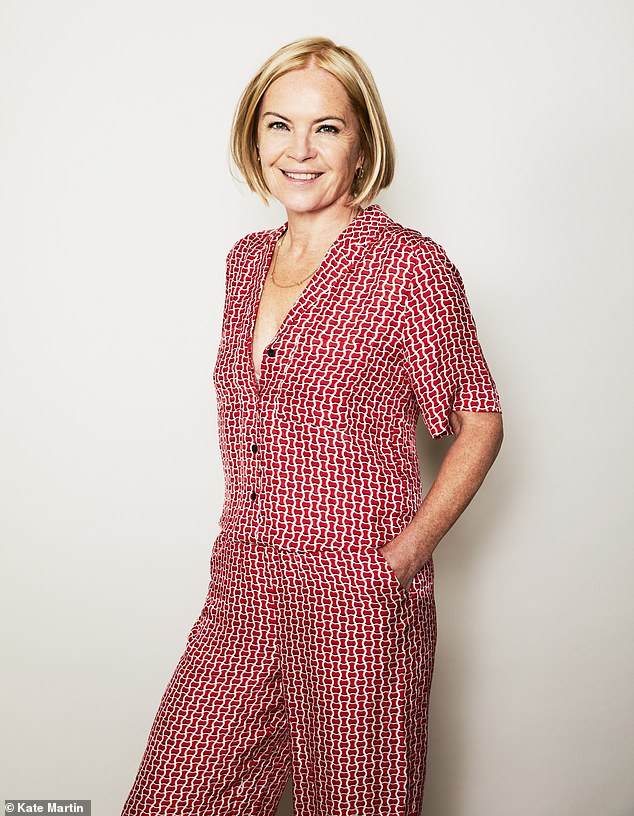 Mariella (pictured) said ‘it’s a pleasure and privilege to have the kids in the house playing their music and saying, “Just listen to this, Mum!”’

She admits to acquiring a recent interest in racy underwear. However, she insists this is not for her husband’s benefit, but her own.

‘Jason is like so many men. It’s a misrepresentation that they’re obsessed with sexy underwear. I think women might be! I think we should wear it because we love it; not because it enhances our desirability.

‘Jason might say, “That’s a strange colour” but he wouldn’t say, “Keep that on. Let’s go to the bedroom”.

‘I just like the idea that under this dress I’m wearing something only I know about.’

Her geometric-patterned Diane von Furstenberg wrap dress, teamed with sensible trainers, was bought in a sale at fashion outlet The Outnet.

‘I’m not a full-price payer. Who goes into Selfridges and buys these clothes?’ she asks, incredulous.

Her secret weapon, she says, may just be her late-life foray into parenthood.

‘It is important to keep being interested in what’s going on, and my children are teenagers at the time when you might be getting out of touch.’

So instead of inveighing against the din and tuning out, Mariella embraces it.

‘It’s a pleasure and privilege to have the kids in the house playing their music and saying, “Just listen to this, Mum!” ’ she smiles.

CRACKING The Menopause, by Mariella Frostrup and Alice Smellie (£20, Bluebird), is out September 16.