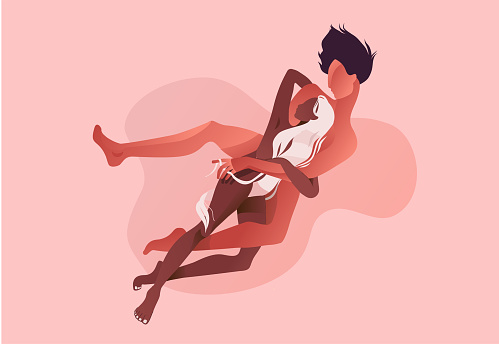 There’s no one-size-fits-all when it comes to sexual turn-ons. As the saying goes – one man’s trash is another man’s treasure.

Given the complexity of sexual pleasure, it’s not very useful to make sweeping generalisations about how gender affects what people enjoy.

However, the patriarchy does affect how we view and enjoy sex, and studies consistently show that there are differences between what turns men and women on.

A new survey has added to this, by showing some fascinating contrasts between what men and women see as their ‘sexual peak’ (AKA, their biggest turn-on).

Now, like much of the research in this area, this survey is small (2,000 men and women were asked) so we can’t claim this reflects every man and woman in the world.

It was also commissioned by affairs site IllicitEncounters.com, which means the people being asked may have specific interests.

So, let’s get into the top ten sexual highs for men and women as defined by the survey.

Women’s number one turn-on is a shared orgasm with a lover; a whopping two-thirds (66%) put that on top.

Men like this too – but only a third (33%) named it as their sexual peak, putting it fourth on the list.

Instead, men’s overall favourite sexual high is having sex with a new partner for the first time.

More than half of men (56%) said that sex with someone they had never slept with before was what excites them most.

The second biggest turn-on for men is – wait for it –  sex with an ex-lover who they still fancy.

There is something undeniably alluring about getting with an ex for women too, but this turn-on fell much lower down the list, in sixth place.

For 42% of women polled, the fleeting adventure of holiday sex was the biggest turn-on.

Having multiple orgasms came third on the list for women, chosen by 36% of those polled.

Next was good oral sex (35%), followed by a dirty weekend away with a lover (32% of women love doing this).

1. Shared orgasm with my partner

9. Sex with a handsome stranger

We all love the feeling of getting into a bed of freshly-washed sheets, but apparently it’s a turn-on for some women, too – making it number six on the female list, even above birthday sex.

Rounding out the list was Valentine’s Day sex, a favourite for the romantic types.

Over in the men’s corner, halfway down the list we have filming a sex tape with a lover. According to the survey, 28% of men have done this and enjoyed it.

Carrying on the theme of what turns men on: third on their list is sex with a stranger. In fact, 35% of men said this was a sexual high.

A shared orgasm was fourth and in fifth place was filming a sex tape with a lover – with 28% of men said to have done this and enjoyed it.