Morrison congratulates Biden in first call with US President-elect

Prime Minister Scott Morrison has spoken to United States President-elect Joe Biden to congratulate him on his election victory amid doubts over the transfer of power from Donald Trump.

Mr Morrison cited the defence relationship between Australia and the US and the anniversary of the ANZUS Treaty next year as reasons for confidence about the strength of the ties between the two countries. 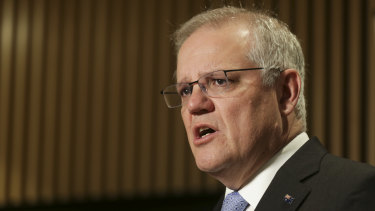 Prime Minister Scott Morrison: “There are no greater friends and no greater allies than Australia and the US.”Credit:Alex Ellinghausen

"I've just spoken to President-elect Joe Biden to congratulate him on his election," Mr Morrison posted on social media after the call.

"There are no greater friends and no greater allies than Australia and the US.

"I look forward to strengthening even further our deep and enduring alliance, and to working with him closely as we face the world's many challenges together.

"We look forward to celebrating the 70th anniversary of ANZUS next year."

END_OF_DOCUMENT_TOKEN_TO_BE_REPLACED

END_OF_DOCUMENT_TOKEN_TO_BE_REPLACED
Recent Posts
We and our partners use cookies on this site to improve our service, perform analytics, personalize advertising, measure advertising performance, and remember website preferences.Ok