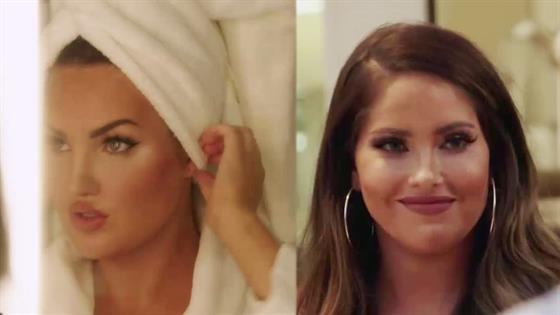 On Instagram and in life, social media star Natalie Halcro wears many hats. “Amateur parent-napper” is kind of a curve ball but does appear to be one of them!

“Do you think they’re onto us?” Stephanie Halcro asked, addressing her siblings from the backseat of Joel Halcro‘s SUV during Sunday’s Relatively Nat & Liv premiere.

“They have no idea what’s up our sleeve,” assured Nat, riding shotgun with some linens and a pair of craft scissors in her lap while Joel steered the getaway car to mom and dad’s house. With guests already starting to trickle in for Rhonda and Jim Halcro‘s surprise anniversary bash across town, the kids were time-strapped and chock-full of creative transportation ideas.

“Here’s what I think we should do: I’m gonna go in, I’m gonna grab them, I’m gonna bring them outside,” Joel suggested, adding that his siblings should wait out front “with the sacks.” For the record, his cargo here is Jim and Rhonda.

“I think we just pull over,” Nat countered. “Like, pull over and burlap sack them.”

The trio ultimately went with their brother’s approach. When it came time for “sacking,” as the children so lovingly put it, Joel ventured inside solo to retrieve his parents (and kept an impressive straight face as he told his father there was “no time for hugs” and “this isn’t what you thought it was going to be”) while his sisters hid behind the garage. Beaming in a coral mini dress and strappy heels, Rhonda sauntered out first and promptly bumped into her daughters en route to the driveway.

“This is a stick up,” Stephanie informed her, armed with a shaky finger gun and a smile. After an enthusiastic shriek from team player Mama Halcro, Nat pulled the pillowcase she’d been clinging to—the “burlap sack” of this operation, if you will—on over her mother’s head.

“I know, I won’t ruin your makeup in here,” she told Rhonda, who’s a really good sport.

“Always an adventure!” chirped the Halcro matriarch as Nat, Stephanie and Joel led their blindfolded, giggling parents back down the driveway and into the car. And that’s how it’s done, folks! 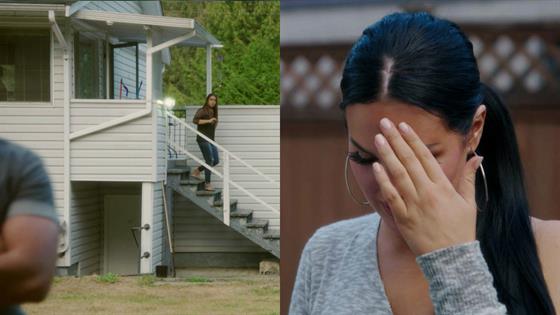 Though the final leg of Rhonda and Jim’s anniversary bamboozle went shockingly as planned—the sacks came off at the perfect moment, just as the sweet couple arrived at Rhonda’s parent’s old house to realize the site of their wedding reception 40 years prior was presently brimming with loved ones, all jazzed to celebrate their epic romance—the same could not be said of the shindig’s more formative stages.

Earlier that afternoon, Nat was panicking.

“The party is literally hours away and nothing is done,” she worried, taking note of the disorganized collection of furniture and supplies littering her grandparents’ former backyard. The fact that Stephanie was unexpectedly MIA during the set-up was kind of like icing on the stress cake for her sister, who could’ve used an extra hand. “For her to not be here right now, it’s really disappointing,” Nat said.

With help from Nat’s assistant, she and Joel did what they could. They dragged couches across the lawn, made flower arrangements, hung string lights and arranged folding tables. But when crunch time rolled around and the party venue’s presentation still very much resembled that of the suburban Vancouver backyard it started out as, an exasperated Nat knew exactly who to call for backup.

“Hey, I really need your help,” she told Olivia Pierson, her cousin, housemate and go-to girl, who picked up after one ring and might’ve actually saved the whole evening.

While the Halcros carried out their pillowcase hostage scheme, Liv showed up to the venue with parents Julia and Brian Pierson and siblings Sofia, Owen and Brock Pierson in tow.

“I know Natalie is stressing because there’s a lot of people coming,” acknowledged Liv, who went to work on the hors d’oeuvre spread almost immediately and got the job done like a pro. Continuing, she told the camera, “This is a huge night for my aunt and uncle and I want to do anything I can to help make sure this is a perfect evening for them.”

See how the big anniversary reveal turned out—and watch Nat and Stephanie hash things out before the party—in the full recap video above! Also, are Liv’s parents getting back together?!