Australia is developing its first national biosecurity plan to combat the growing risk of environmental and financial damage from exotic pests and diseases, driven by factors such as globalisation and climate change.

Federal Agriculture Minister Murray Watt said the initiative, which had been agreed upon by the states and territories, would set the strategy for tackling escalating biosecurity risks over the coming decade. 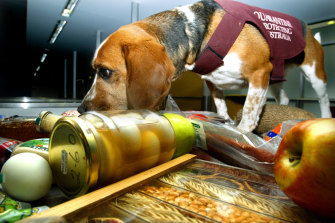 The new National Biosecurity Strategy notes Australia receives an average of 115 million international mail items and 2.6 million shipping containers a year and faces the “challenge of managing a range of growing and changing threats”.Credit:Peter Morris

“The management of Australia’s biosecurity system is becoming increasingly complex, creating new challenges for governments, industry and community stakeholders in protecting our agricultural sector,” said Watt, who will announce the plan on Tuesday.

Australia has suffered a number of devastating outbreaks of pests and diseases since colonisation and Watt said a stronger shield against future incursions was a “critical national asset”.

“Strong and efficient biosecurity is even more important as we respond to emerging challenges including diseases on our doorstep including foot and mouth disease, African swine fever, lumpy skin disease and xylella,” Watt said.

While state, territory and federal governments have undertaken their own biosecurity planning in the past, this is the first overarching national plan to harmonise the prevention of incursions by exotic pests and diseases.

CSIRO’s 2020 biosecurity report said while Australia had one of the world’s strongest biosecurity systems, outbreaks were continuing to rise in volume and complexity. It said the risks were increasing due to growing levels of trade and travel, urbanisation, climate change and biodiversity loss.

CSIRO found that between 2012 and 2017, the annual number of interceptions of biosecurity risk materials at Australian borders rose by almost 50 per cent to 37,014 a year.

The new National Biosecurity Strategy notes Australia receives an average of 115 million international mail items and 2.6 million shipping containers a year and faces the “challenge of managing a range of growing and changing threats”.

It includes an agreement to co-operate among the states and will focus initially on raising public awareness about the dangers of bringing materials into the country that can carry pests and diseases.

The strategy has identified a need for new funding to bolster the system and Watt said last week he had begun discussions with his cabinet colleagues about “what more we can be doing and what more funding might be required”.

“We take this seriously and we’re prepared to do what needs to be done,” Watt said.

CSIRO has calculated that pests, weeds and diseases cost Australia $25 billion a year, including environmental damage from tens of millions of feral pigs, goats, rabbits, deer and other exotic pests.

With foot and mouth disease now in Indonesia, Australia is on high alert to stop the highly infectious livestock virus from spreading here. It’s estimated a serious outbreak of the disease, which can be carried on infected meat and other animal products as well as dirty shoes, could cost the economy $80 billion.

The livestock sector is also on the lookout for lumpy skin disease, which reduces productivity in cattle. The disease, which is in Indonesia, can be blown in on the wind through infected insects.

The horticulture industry, which depends on the hives of European honeybees to pollinate fruit, nut and other crops, was hit for six in June, when the deadly varroa mite entered NSW.

Xylella, also known as bacterial leaf scorch, is on the march around the world after moving into Europe from South America. It can be spread via insects or plants and poses a risk to Australia’s native flora and commercial crops.

Other damaging plant diseases such as myrtle rust have become established in Australia in recent years.

The West Australia government is racing to stop an incursion of an exotic beetle, the polyphagous shot-hole borer, which is spreading through Perth and could kill countless trees across the country if left unchecked. The Queensland government is fighting a losing battle to stamp out multiple outbreaks of fire ants and yellow crazy ants.

Cut through the noise of federal politics with news, views and expert analysis from Jacqueline Maley. Subscribers can sign up to our weekly Inside Politics newsletter here.