Home » Lifestyle » Never mind the title. The Sex Lives of College Girls is a guilt-free pleasure

Never mind the title. The Sex Lives of College Girls is a guilt-free pleasure

It’s OK. You don’t need to skulk off to a darkened room to watch The Sex Lives of College Girls; despite the title, it’s not that kind of show. Yes, there’s sex, but it’s more talked about than shown, and more often than not it’s used for comic effect.

Co-created by Mindy Kaling (The Mindy Project, Never Have I Ever) and Justin Noble (a veteran of Brooklyn Nine-Nine’s writers room), College Girls is basically an American campus comedy told from the female perspective. 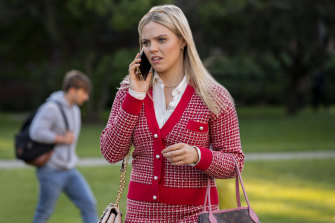 Renee Rapp as Leighton, the spoiled rich kid with a secret life in The Sex Lives of College Girls.Credit:Binge

It’s as if we’d picked up the story of the girls from Booksmart or Blockers in their first year at university. Or it’s as if we’d travelled back in time to find the women from Sex and the City forging their friendship in the crucible of a shared dorm room.

The 10-part series (mostly half-hour episodes, though the first clocks in at 49 minutes) is fresh and funny without quite being revolutionary. And while they thrum with authenticity, there’s also an element of the stock character about our four leads.

Kimberly (Pauline Chalamet, sister of Timothee) is the scholarship girl from humble origins, having to work her way through college and suddenly realising that her class-topping French is no match for an accent honed on the ski fields of Chamonix. Alyah Chanelle Scott’s Whitney is the soccer-playing daughter of a Republican senator, and Amrit Kaur’s Bela is an aspiring comedian who sees college as an opportunity to shake off the shackles of her Indian heritage and dive into the deep end of the sex pool. 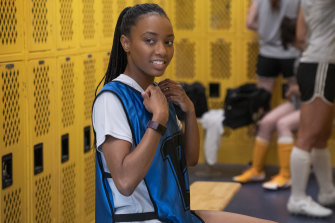 As Leighton, Renee Rapp is an upper-class snob hiding her sexuality. That might sound like just another poor-rich-kid storyline in the mode of Gossip Girl et al, but it’s handled with a winning mix of comedy and empathy and is one of the strongest strands in the seven episodes available for preview.

Each of these young women is, to a degree, a projection of their parents’ fantasies, memories, desires and needs, at least until they can wriggle their way free of them and forge their identities.

Rob Huebel (Transparent) as Leighton’s father is hilarious in his brief appearances, so enamoured of his alma mater that it’s all he can do to stop himself enrolling again. “I’m telling you,” he says to his daughter on the drive up to Essex College. “After the next four years, you’re probably going to want to have sex with New England, too.”

Bela’s parents think she’s studying to be a doctor (she’s not). Whitney’s mother wants them all to stay off Twitter for the next four years to save her from any scandals. Kimberly’s parents just want her to be happy and to not feel ashamed of where she’s come from.

Of course there’s drinking, bad sex, good sex, slow-burn romance, and even the occasional bit of study. But mostly College Girls is a paean to friendship, to self-discovery and to the networks that are foisted upon people by the mysteries of the universe – or college administrations – and which can sometimes, if you’re incredibly lucky, yield gold. It’s a joy.