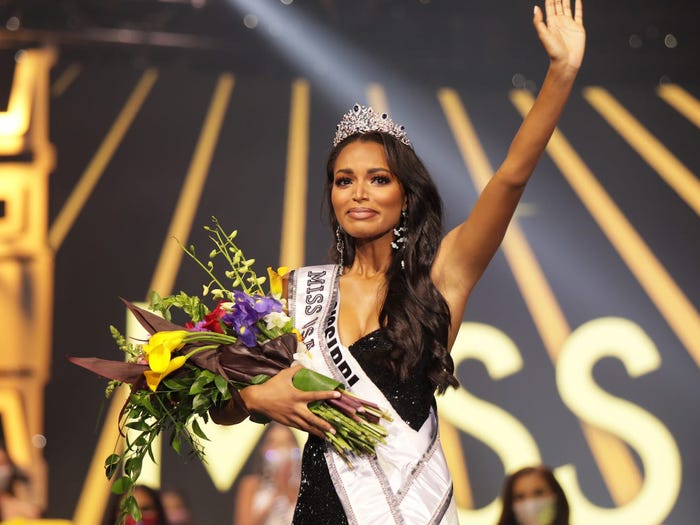 Asya Branch has been crowned Miss USA, but that's not the only reason why she's making headlines this week.

Shortly after Branch — who represented Mississippi — was announced as the winner on Monday night, people on social media discovered that she once sang the National Anthem at a Donald Trump rally.

A since-deleted photo from Branch's Instagram, dated October 2, 2018, showed the pageant queen singing at the podium in her official tiara and sash. At the time, she was Miss Mississippi under Miss America, which is a separate organization from Miss USA.

"Incredible honor to sing the national anthem tonight in Southaven for the President Trump rally," her caption read, according to a screenshot of the post captured by the Daily Beast. Branch's caption ended with an American flag emoji, as well as the hashtag #potus.

Insider spoke to Branch on the morning after her win, and the new Miss USA confirmed that she had been contractually obligated to sing at the rally.

"I think what people miss a lot of the time is the fact that, as Miss Mississippi in the Miss America system, I was under a contract as an employee of the organization," she said. "Part of my contract obligated me to attend appearances, and that [Trump rally] was one of them."

"And I think that any opportunity that I get to sing the National Anthem is a true honor, regardless of where it takes place," she added.

Trump once shared control of the Miss Universe Organization but sold it to WME/IMG in 2015 after NBC decided to terminate their contract, according to Forbes.

Karen Jones, the business manager for Miss Mississippi in the Miss America system, confirmed to Insider that Branch was booked to sing at Trump's rally in 2018.

"I also had a Miss Mississippi that sang for President Obama at the National Prayer Breakfast," Jones said. "These girls are very comfortable traveling the state and making appearances. As any titleholder from any state, they represent the entire state of Mississippi and all the people of Mississippi. Anyone can book Miss Mississippi for any event and if her schedule allows for it."

"I have had girls over the years that have met with senators, governors, etc. And even though they may not have agreed with them on some issues, or been of the same political party, they were always gracious to attend whatever event they were booked for," Jones added. "Asya is one of the most gracious and genuine souls that I have ever met with. She is one of those that can put her views to the side and represent everyone and do the job at hand!"

Others on social media noted that Branch had appeared at a roundtable with Trump and Jared Kushner at the White House to discuss the First Step Act, a bipartisan criminal justice reform bill that was signed into law in December 2018.

"The roundtable discussion was an incredible opportunity for me to sit at a table where decisions are being made, and leave a lasting impact on a subject that I'm extremely passionate about," Branch told Insider. "Having that First Step Act passed was just truly incredible to me, and it just warmed my heart to know that I was part of that discussion of progress in the right direction when it comes to prison reform."

"And I think, as a nation, it's just important that we focus on what really matters and we let go of the hatred," she added. "And we just focus on us as the people, and what we can do using our voices."

Branch's Miss USA platform is helping the children of incarcerated parents. She was inspired to publicly speak out about the issue after a pageant judge encouraged her to be open about what it was like growing up with a father in prison.

"That was probably one of the greatest decisions I ever made," Branch said. "Because it helped me grow and helped me inspire people, and motivate them and give them a sense of hope."

As questions swirl around when — and whether — Trump will concede after losing to Joe Biden in the presidential election last week, Branch said she believes that the American people's decision needs to be respected.

"The people have voted. That's the whole purpose of us having this right, and we exercised it," she said. "And that should be that. People have voted and they deserve to have their voices heard."

A representative for the Trump campaign didn't immediately respond to Insider's request for comment regarding Branch's appearance at his 2018 rally.

END_OF_DOCUMENT_TOKEN_TO_BE_REPLACED

END_OF_DOCUMENT_TOKEN_TO_BE_REPLACED
Recent Posts
We and our partners use cookies on this site to improve our service, perform analytics, personalize advertising, measure advertising performance, and remember website preferences.Ok