Scott Morrison and Dominic Perrottet aren’t hiding their combative past. Rather, they’re embracing it.

Just months ago the pair – a Liberal prime minister and a Liberal state treasurer – were at loggerheads over federal financial support for their home state of NSW. 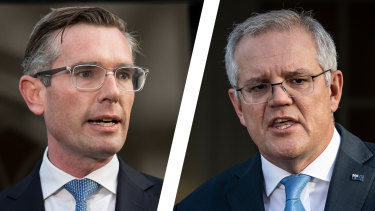 Dominic Perrottet says he shares a “very constructive” relationship with Scott Morrison, despite the tense recent history between them.Credit:Wolter Peeters

A “tired and cranky” Prime Minister, as columnist Niki Savva told the story, had become “increasingly belligerent” with Perrottet’s questioning about elements of the package and hurled an “F-bomb” in his direction during a video hook-up.

Morrison was angered by Perrottet’s public interventions over the pandemic response, including calling for the reinstatement of JobKeeper, which he felt was undermining the federal government. The then-NSW treasurer had clearly pushed him to the limit.

Faced with questions over the exchange following Perrottet’s elevation to NSW Premier on Monday, neither man was denying the facts.

“We’ve got a good, robust relationship,” Morrison told the Nine Network’s Today show. “It’s a real relationship. So when we disagree, we disagree and the next day we’re straight back into it.

“Why would you have it any other way? He stands up for NSW. I look after the national interest. I mean, you know, we can’t kid ourselves.”

Perrottet says he shares a “very constructive” relationship with Morrison, who have both known each other for decades through the NSW Liberal Party division, usually through their active factional work.

The 39-year-old has been a standard-bearer for the conservative faction within the party for years. It has led to many confrontations with Morrison’s right-hand man, Alex Hawke, who controls the party’s centre-right faction.

Within the NSW division, many have become increasingly frustrated that Morrison has failed to pull Hawke into line over his factional activities, which have led to preselection challenges and sparked allegations of branch stacking.

So Perrottet doesn’t shy away from the fact it has been, at times, a tense relationship.

Liberal figures who know both men well are certain their pragmatic nature will ensure a smooth working relationship between the pair.

Perrottet’s rise makes him the first permanent change to national cabinet, the intergovernmental decision-making forum established last year at the beginning of the pandemic.

Contrary to commentary in the past days, Liberals believe his addition will only help Morrison challenge the closed-shop mentality of some Labor state premiers.

“Dom is a fierce advocate for what he believes, and I suggest he will push back on the Mark McGowans and Dan Andrews of this world. He will be more combative than Gladys in that sense,” one observed on Monday.

“His passion is the economic recovery from the virus and he will be pushing that as hard as he can. He will work with whatever ally he can find to push forward the agenda.”

Perrottet, who’s been an advocate for reopening the economy as soon as possible, has also urged governments to use the COVID-19 pandemic to reform the tax system. He has found some unlikely allies along the way.

While he says he doesn’t want national cabinet to be a “Kumbaya session”, he warned the media about the lazy promotion of division between leaders.

“One of the … great aspects of this pandemic has been the way in which Labor treasurers and Liberal treasurers have worked very closely together around the country to secure great outcomes,” Perrottet says.

“Tim Pallas in Victoria is a very good friend of mine. And the sharing of information of stimulus support, of economic support, has all come through the unity that we have.”

But while Perrottet’s promotion may have led to a cooling in federal-state hostilities, Morrison would be conscious of the timeless advice of former prime minister, Paul Keating: Never stand between a Premier and a bucket of money.