NSW Treasurer and Environment Minister Matt Kean says his government has signed a pledge with the United Nations Climate Change Conference (COP26) to boost electric vehicle sales and says it is on track to make 50 per cent of all new vehicles sold in the state electric by 2030.

The three-page joint pledge with COP26 says federal governments who sign will seek to work “towards all sales of new cars and vans being zero emission by 2040 or earlier, or by no later than 2035 in leading markets”. 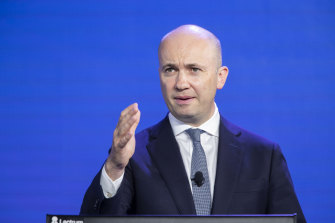 NSW Environment and Energy Minister Matt Kean is working with DFAT to get the pledge formalised.Credit:Louie Douvis

Mr Kean told Sky News he had “signed the document” on Wednesday and was working with the federal Department of Foreign Affairs and Trade (DFAT) to get it formalised.

“Because of the policies we have put in place we are already well on target to meet those ambitious targets set by COP. In fact, we’ll have 50 per cent of all new cars sold in NSW being electric by 2030,” he said.

The COP electric vehicles pledge is one that the UK, as the host country, pulled together. 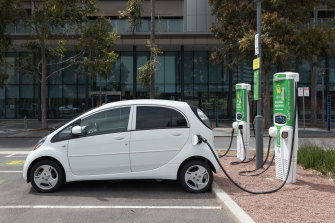 The COP pledge is one that the UK, as the host country, pulled together.Credit:

Road transport accounts for 10 per cent of global emissions, and its emissions are rising faster than those of any other sector. In Australia, the transport sector is the second biggest source of greenhouse gas emissions, after the energy industry.

Earlier this year, the NSW government announced it would abolish stamp duty on electric vehicles and offer drivers other incentives to increase their uptake to ensure more than half of all new car sales by 2031 were electric.

Mr Kean’s action stands in contrast with that of the federal government, which has not made clear whether it will sign the pledge. Prime Minister Scott Morrison announced on Tuesday the federal government would boost investment in charging infrastructure, particularly in regional Australia, to help manage the transition towards a 1.7 million electrified national fleet.

Mr Kean said he was looking forward to working with his federal counterparts, but they could be doing more to support the electric vehicle industry.

“They can put a lot more money up to ensure that everyone can benefit from owning an [electric vehicle]. They can also do things like providing subsidies or waiving taxes for people who buy an [electric vehicle], and the final thing they can do is look at tail pipe emissions standards,” he said on Sky News. “We want to ensure people are getting access to cheaper vehicles that are cheaper to run as well, and our policies are designed to do that.”

The motor industry has hit back at the federal government’s new electric vehicle strategy, saying there were large gaps in the policy that need to be addressed.

Domestic sales of electric cars have risen at record levels in the past six months amid state government incentives, but come off a very low base. New car sales data released in August showed 8688 battery and plug-in electric vehicle were sold in the first half of 2021.

Electric Vehicle Council chief executive Behyad Jafari said NSW had recognised that once a car was sold it stayed on the road for 15 to 20 years, and therefore reaching net zero by 2050 required action today.

The Victorian government has a $100 million electric vehicle road map.

Get daily updates on the climate summit that will shape our future. Sign up to our COP26 newsletter here.