Olivia Jade Proves She's Back on the Internet for Good

Olivia Jade is ready for her close-up… on Instagram. The 20-year-old influencer took to the social media platform on Wednesday, after taking a lengthy break in the midst of the college admissions scandal. While she technically returned to Instagram three days ago to announce her latest YouTube video, which came nearly eight months since her last, this was the first time she uploaded a selfie. Well, two.

“i hope you have a beautiful day,” she captioned her post and closed with the cowboy emoji. It was short and sweet message, but from the thousands of “likes” she’s already received, it’s clear it caught people’s attention.

For her first portraits shared on the ‘Gram, the 20-year-old appeared fresh-faced and dressed cozy, as she sat perch on her bed wearing a black spaghetti strap tank-top (or possibly a bra). As for her beauty look? She kept things simple and low-key.

Her brows were perfectly filled in, she added a touch of mascara and threw on a nude lipstick to complete her barely-there makeup look. Moreover, she styled her hair in a messy bun and kept a few wispy bangs out.

The 20-year-old star also shared a few Instagram Stories, and it doesn’t seem like she plans to slow down any time soon. Her return to social media has gotten a lot of buzz, considering her parents—Lori Loughlin and Mossimo Giannulli—await trail and potential jail sentences.

i hope you have a beautiful day ?

i hope you have a beautiful day ?

Back in March, the Fuller House actress and her fashion mogul husband were indicted in connection with the college admissions scandal.

The couple was charged for allegedly paying $500,000 in bribes to have their daughters—Olivia and her now-21-year-old sister Isabella Giannulli—admitted into the University of Southern California as recruits to the crew team. However, their daughters are not rowers. Lori and Mossimo pleaded not guilty and currently await trial. They could face up to 60 years in prison if they’re found guilty.

On Sunday, Olivia returned to YouTube to give her massive following an update on her life. 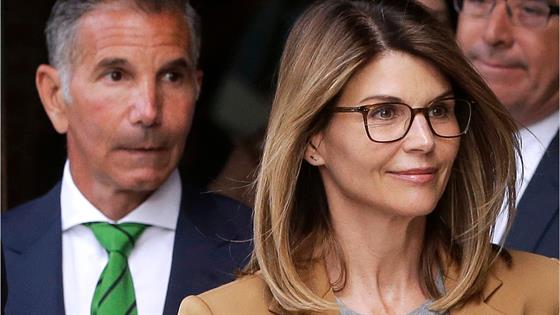 “Obviously, I’ve been gone for a really long time and as much as I wish I could talk about all of this, it’s really hard for me to say this, just because I know that it’s something that needs to be addressed…,” she began her 2-minute video. “It’s just, unfortunately, which is also why I didn’t know exactly when I should come back to YouTube, but the reason for that is just because I’m legally not allowed to speak on anything going on right now.”

“A part of me is like, should I come back to YouTube right now, ’cause it’s been so long and I actually really, really miss it,” she continued. “I genuinely miss filming. I feel like a huge part of me is just not the same because this is something that I’m really passionate about, it’s something I really like to do. But I also didn’t know, I debated for like, seven or eight months, like, well if I can’t talk about it, is there a point in coming back, and not being able to say anything?”

END_OF_DOCUMENT_TOKEN_TO_BE_REPLACED

END_OF_DOCUMENT_TOKEN_TO_BE_REPLACED
Recent Posts
We and our partners use cookies on this site to improve our service, perform analytics, personalize advertising, measure advertising performance, and remember website preferences.Ok