On a break from Mad Max, Miller uncorked a whimsical Arabian fantasy

George Miller has described Three Thousand Years of Longing as his palate cleanser: the film you make when you’re not making a Mad Max sequel. 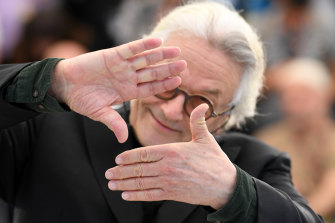 This eccentrically lush literary fantasy, about an English academic who goes to Istanbul and encounters a djinn, had its premiere at the Cannes Film Festival last Friday. Reviews were decidedly mixed, but audiences and Miller himself were thrilled. “This is the first time I’ve seen the film with an audience, and it’s very moving,” Miller, 77, told the audience after a six-minute ovation. “I’m very, very grateful.”

The next day, Miller told a packed press conference that most stories are allegorical. “They have a poetic dimension, which means they’re open to interpretation depending on who’s watching them. We watch films according to our own lived experience. That’s why I think fantasy stories lend themselves to dealing with much more complex things than, say, documentary.”

Miller was flanked by the film’s stars, Tilda Swinton and Idris Elba, along with his daughter and co-writer Augusta Gore. Tilda Swinton plays the narratologist (an expert on stories) Alithia, who comes to Istanbul for a conference, buys a stoppered glass bottle in a junk shop and soon finds she has a genie the size of a bus in her hotel room. She knows too much about myths and legends to get excited when he offers her three wishes. Wishes backfire, she tells him. That’s usually the point of such stories, which warn against greed and arrogance.

He responds by telling her stories of his loves among mortal women, including the Queen of Sheba and a slave in the court of Suleiman the Magnificent. They are evoked with the extravagant visual invention to be expected from the director who gave us Fury Road.

Based on a novella by A S Byatt that Miller said “wouldn’t let me go”, Three Thousand Years of Longing is a whimsical one-off at a time when studios are increasingly focused on known quantities.

The film was supposed to shoot in London and Istanbul, but COVID restrictions meant it was shot entirely in Sydney, with sets and visual effects replicating their intended locations. Swinton and Elba had to spend two weeks in quarantine. Gore said it was “an intensive rehearsal time over Zoom; we just talked and talked”. 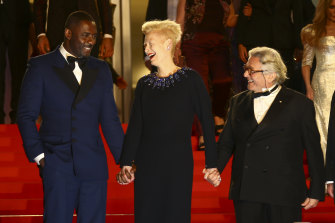 The situation also demanded persistence. “I feel in George Miller we have met a djinn.” Swinton told the press conference. “Seriously! He says he’s going to do something and he does it.”

She first met Miller at the Cannes Film Festival five years ago: he was placed opposite her at an official lunch. “We fell into this very beautiful conversation. About 15 minutes in, I realised it was George Miller. And that was it, the die was cast. We hung out the whole day, we sat with [Parasite director] Bong Joon-ho in the evening – that was a very good table – and we just became friends, quite quickly but quite deeply. About a year later, he sent me a script.”

He described it as a “little film”, she says. “A chamber piece that is a conversation between two beings – and it’s huge, as you know! What I saw on that enormous screen last night was overwhelming. But what he manages to do is keep (the story) small and keep it real.”

Initial reviews were not so enthusiastic. “This cerebrally sexy shot of One Thousand and One Nights-adjacent whimsy strains so hard for beguilement and timelessness that it’s ponderous and heavy,” said the Hollywood Reporter.Variety dismissed it as “a brain-tickling eyesore”. Film Verdict conceded that “this personal passion project is an admirably ambitious oddity for a mainstream director, but also something of a hot mess, lumpy in structure, muddled in message, with visual razzle-dazzle standing in for intellectual and emotional depth.”

Indiewire, however, rejoiced in a film that could be both a search for “a kind of lasting serenity” and the kind of movie where someone’s head falls off, turns into a spider and then explodes into a teeming mass of smaller spiders. “George Miller could find more cinema in a single hotel mini-bar than some contemporary directors could squeeze out of an entire galaxy far, far away, and he manages to do exactly that without unbalancing the delicate soul of the intimate two-hander he wields here.”

A cultural guide to going out and loving your city. Sign up to our Culture Fix newsletter here.