Former premier Gladys Berejiklian has told a corruption inquiry she would still keep secret her five-year relationship with disgraced ex-MP Daryl Maguire if she had her time again.

Ms Berejiklian began her evidence in the witness box on Friday insisting she had no obligation to reveal the relationship now at the centre of an Independent Commission Against Corruption probe. 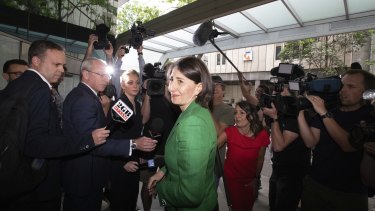 “If you were able to have your time again, would you disclose your close personal relationship with Mr Maguire to your ministerial colleagues or any of them?” counsel assisting the commission Scott Robertson said.

“I didn’t feel it was of sufficient standard or sufficient significance in order to do that,” Ms Berejiklian said.

“The threshold for me was, did I feel there was a commitment which I would be able to share with my parents or my sisters? And I didn’t feel that there was a sufficient significance in order to do that in terms of commitment.”

Ms Berejiklian said she never considered Mr Maguire in the same way she considered her parents and sisters, despite being presented with a 2017 text message in which she told him “you are my family”.

“I regarded him as a part of my love circle…of people that I strongly cared for,” she said.

“I don’t want to diminish the strength of feeling I had for him… I had very strong feelings for him. But I didn’t feel the relationship was at a stage where I would introduce him necessarily… or need[ed] to declare it.”

It is the first time Ms Berejiklian has given evidence to the Independent Commission Against Corruption’s probe into whether she breached the public trust or encouraged corrupt conduct during her undisclosed relationship with the former member for Wagga Wagga.

The inquiry is focused on two multimillion-dollar grants issued to a gun club and a music conservatorium in Mr Maguire’s electorate while the pair were in a relationship and Ms Berejiklian was treasurer and later premier. 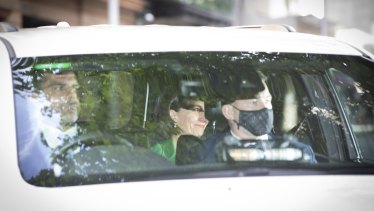 Ms Berejiklian arriving at the ICAC to give her first full day of evidence.Credit:Renee Nowytarger

The commission on Friday heard a series of intercepted phone call excerpts between Ms Berejiklian and Ms Maguire in which she assured him she would step in to ensure $170 million in funding for his electorate.

In the phone call on May 16, 2018, an irate Mr Maguire complained about the lack of funding for infrastructure in Wagga Wagga in the upcoming state budget.

Mr Maguire said he had told then treasurer Dominic Perrottet he would have a “f–king riot on [his] hands” if projects like the Wagga Wagga Base Hospital and Tumut Hospital were not funded.

In another call hours later Ms Berejiklian said “I’ve already got you the Wagga hospital. I just spoke to Dom [Perrottet]… he does what I ask him to.

“We’re giving Wagga more money than ever before,” Ms Berejiklian said. “I just got you the one hundred and seventy mill … in five minutes.”

In the same call she also suggested the lack of funding to date was “Brad’s fault for not being on top of who needs what,” in a reference to Health Minister Brad Hazzard.

There is no suggestion by the ICAC of any improper conduct by Mr Perrottet or Mr Hazzard.

Commencing her evidence on Friday, Ms Berejiklian said every decision she made was in the interest of the public, the community, or the government.

Counsel assisting the commission Scott Robertson asked if she therefore agreed that probity in decision-making regarding the use of public funds was important in the public interest.

“I have lived my life by that, every day that I have spent in public life,” Ms Berejiklian said.

The former premier also agreed Mr Maguire was an extremely active local member but said she expected he was “as vigilant with many other colleagues as he was with me”.

Ms Berejiklian denied that Mr Maguire had a greater level of access to her during their relationship than other backbenchers, adding that she made herself accessible to all her colleagues.

She was twice stopped from elaborating on her answers by Assistant Commissioner Ruth McColl, who asked her to answer Mr Robertson’s questions and “not make speeches.”

It follows an explosive day of evidence from Mr Maguire on Thursday, which heard a damning telephone intercept in which Ms Berejiklian promised to “throw money” at his electorate days after he was forced to resign under a corruption cloud in 2018.

Ms Berejiklian’s legal team unsuccessfully argued for private session to hear evidence containing intimate details about the relationship, saying they were not in the public interest and could lead to humiliation and harm.