Labor has ramped up a scare campaign accusing the Coalition of plotting to cut Medicare and declaring it is the only party to be trusted on health. Prime Minister Scott Morrison says the Coalition is “the best friend Medicare has”.

But for voters frustrated about out-of-pocket medical costs and wait times, the question remains: Which major party is the strongest on health? 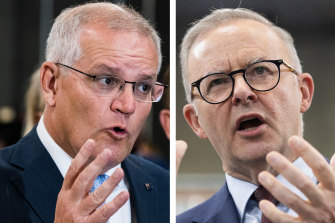 Scott Morrison and Anthony Albanese both say they will safeguard Medicare, but who has the strongest record on health?Credit:James Brickwood/ Alex Ellinghausen

Labor clearly wants to spook voters into thinking the Coalition will hollow out Medicare.

Opposition leader Anthony Albanese last week said “Medicare has been undermined, the cost of seeing a GP is an issue”, while the Labor Party said on Twitter: “At this election, you can choose Scott Morrison or you can choose Medicare. But you can’t have both.”

Morrison has referenced Medicare continuously throughout this election campaign, saying his government achieved “record levels of Medicare bulk-billing” and pointing to the growing health budget, with $31.4 billion to be spent on Medicare in 2022-23.

“That’s the best friend Medicare has, getting Medicare bulk-billing rates to where we have them,” he says.

Yet the reality is neither side has announced any major reform aimed at tackling the problems in the health system.

Labor has ditched the $2.3 billion cancer plan it took to the 2019 election and is instead offering smaller health pledges such as a $135 million plan to trial GP urgent care clinics.

But about a third of Australians pay an out-of-pocket fee when they visit their GP, with a 15-minute consultation on average costing $41.12 after the Medicare rebate of $38.75, according to Health Department data.

Neither party has agreed to lift Medicare rebates, as demanded by doctors.

Nor have they promised to increase hospital funding, as the states push for an estimated $20.5 billion over four years to tackle ambulance ramping and expanded elective surgery waitlists.

Questioning the future of Medicare under the Coalition was a tactic employed by Labor in the 2016 election campaign.

The Coalition had made itself vulnerable on the issue in 2014 when then-prime minister Tony Abbott unsuccessfully tried to impose a $7 co-payment for visiting the doctor.

Liberal frontbencher Anne Ruston, chosen last month to replace retiring Health Minister Greg Hunt, has been forced to defend 2014 comments on Abbott’s co-payment plan, that Medicare was not sustainable and “unfortunately, the credit card is maxed out”.

After initially declining to rule out future cuts after being announced as the Coalition’s pick, Ruston said: “Our government has been absolutely clear that we are not cutting Medicare.”

Dr Michael Feneley, a Sydney cardiologist running as the Liberal candidate in the marginal Central Coast seat of Dobell, also supported the co-payment and in 2015 questioned the free provision of public hospital care to all Australians.

For his part, the prime minister points to the fact that, as treasurer in 2017, he introduced the Medicare Guarantee Bill, which didn’t guarantee the existence of Medicare itself, but ring-fenced tax receipts earmarked for spending on health.

Australian Medical Association president Dr Omar Khorshid said he was disappointed by the lack of major health policies halfway through the election campaign.

State premiers have written to Morrison and Hunt asking for a 50:50 split on hospital funding, and to remove the annual cap on activity, to deal with the COVID-19 elective surgery backlog.

“This is not something an incoming government is going to be able to ignore,” Khorshid said.

“Political parties should be outlining how they will fix our hospital system, should they win government.”

‘Political parties should be outlining how they will fix our hospital system, should they win government.’

Instead, there has been a series of smaller promises by both sides.

In a move aimed at addressing middle Australians’ cost-of-living concerns, Morrison last month promised to reduce the maximum cost of drugs listed on the Pharmaceutical Benefits Scheme by $10 to $32.50.

Albanese used Labor’s campaign launch on Sunday to pledge a slightly larger reduction of $12.50, lowering the maximum Australians would pay for PBS medicines to $30.

Morrison followed on Monday with a pledge to expand access to the seniors’ health card to give older Australians cheaper medicines and healthcare, even if their income is more than $90,000 a year for singles or $144,000 for couples.

Hunt has trumpeted the government’s record on subsidising drugs through the PBS, approving more than 2900 new and amended listings to the tune of $16.5 billion since winning government in 2013.

Labor delayed listing several medications on the PBS in its 2011 budget after they were approved by the independent Pharmaceutical Benefits Advisory Committee but has since committed to following PBAC’s recommendations.

The March federal budget included $525.3 million over four years to reduce the PBS safety net threshold, lowering the number of scripts people need to pay for before the safety net kicks in, which is expected to save 2.4 million people an average of $80 a year.

While Morrison is correct that the proportion of GP services that are bulk-billed has risen while the Coalition has been in government, the statistics paint a more complicated picture.

The Health Department’s annual Medicare report shows 89 per cent of GP services were bulk-billed in 2020-21. When Labor was last in government, it was 82 per cent.

Much of the growth comes down to the tendency of GPs to bulk-bill chronically ill patients – a growing cohort that includes the elderly – who are often on low incomes, along with a temporary bulk-billing boost from COVID-19 telehealth. This is counterbalanced by GPs charging gap fees to patients they believe can afford to pay.

According to the Royal Australian College of General Practitioners, only 22 per cent of GPs work at a practice that bulk-bills all patients, while 64 per cent of GPs reported bulk-billing most patients. This is roughly in line with Health Department data tabled in the Senate showing 66 per cent of patients had all GP consultations bulk-billed in 2018-19.

Only 35 per cent of specialist attendances were bulk-billed in 2020-21 and a Grattan Institute analysis shows out-of-pocket payments for all Medicare-subsidised services increased by 50 per cent over the past decade.

Medicare rebates, which rise in line with the wage price index, were frozen by Labor in 2013 under a policy continued by the Coalition until 2017 when the freeze was progressively eased.

Doctors say the rebates need a substantial hike to keep up with the rising cost of delivering healthcare.

Labor’s health spokesman, Mark Butler, says cutting Medicare “is in the Liberals’ DNA” and that the Opposition would “have more to say on our plans to protect and strengthen Medicare during the campaign”.

Cut through the noise of the federal election campaign with news, views and expert analysis from Jacqueline Maley. Sign up to our Australia Votes 2022 newsletter here.