Payroll jobs and wages fell in the weeks after JobKeeper ended

Australian Bureau of Statistics data released on Tuesday shows there were 1.5 per cent fewer payroll jobs for the fortnight to May 8 than at the end of March, when JobKeeper came to an end. However, the May jobs result was 1.5 per cent above pre-pandemic levels. 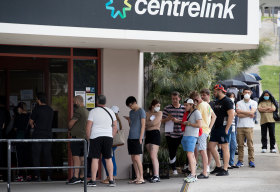 JobKeeper was introduced at the height of the coronavirus pandemic as people losing their jobs queued outside Centrelink.Credit:Janie Barrett

Smaller employers were the most affected over the two weeks to May 8, with firms that hire less than 20 people recording a 3.3 per cent decline in total employment size. This was down 1.4 per cent between March 14 and May 8. Across all businesses there was a 0.5 per cent reduction over the latest fortnight and a 1.5 per cent increase since the middle of March.

The ABS has put caveats on the accuracy of those figures as business-level figures often face significant revision, particularly for smaller employers, and the payroll and wages figures are not seasonally adjusted as they have not been collected by the official statistics bureau for long enough.

ABS head of labour statistics Bjorn Jarvis said every state and territory was recording payroll jobs above pre-pandemic levels and since March this year there have been increases in jobs for education and training and retail.

“There were decreases across the three other large employing industries,” Mr Jarvis said. This includes accommodation and food services, professional, scientific and technical services and health care and social services. He noted JobKeeper, Easter and state-based restrictions to limit the spread of coronavirus could be having an effect on the data.

The latest labour force figures show the number of Australians in work fell for the first time in six months in April. The unemployment rate declined but this was in part due to fewer people looking for work or choosing to take on paid hours. A the same time, online jobs listings and vacancies continue to be at historic highs.

In Victoria, between April 24 and May 8, payroll jobs fell 0.8 per cent and total wages fell 2 per cent. Over the same period in NSW jobs declined 0.5 per cent and wages dropped 1.3 per cent.

Queensland jobs and wages declined 0.7 per cent and 1.7 per cent respectively, while in WA jobs fell 0.1 per cent but wages increased 0.6 per cent.

Younger workers were most affected over the two weeks measured, with a 1.1 per cent decrease in jobs worked for those aged 20 to 29 and a 4.1 per cent decline in wages for 15 to 19-year-olds.

Men were affected more significantly than women, with payroll jobs worked by men down 0.8 per cent and total wages down 1.8 per cent. Women’s jobs decreased 0.4 per cent while payments declined 0.5 per cent.

Payroll jobs in agriculture, forestry and fishing declined by 4.3 per cent over the fortnight and wages fell 5.4 per cent for this sector.