The Reserve Bank has pledged to conduct a detailed review of the emergency policy interventions it made during the coronavirus pandemic, including its unprecedented move to increase the money supply to buy hundreds of billions of dollars in government bonds.

RBA governor Philip Lowe said he wanted to ensure lessons were learned from the way monetary policy was implemented during the COVID-19 crisis and in the next 12 months there would review of the measures implemented to help cushion the economic blow. 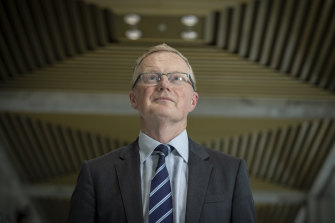 RBA Governor Lowe will give a speech on inflation at 1.30pm. Credit:Louie Douvis

Speaking at an Australian Business Economists event on Tuesday, he said it was “appropriate once we are through the other side that we step back and look at the whole experience” and he intends to make the review public.

“We’ve implemented innovative policies, things I never thought we’d do,” Dr Lowe said about the RBA’s reaction to COVID-19 outbreaks across the world and in Australia, forcing large swathes of the economy into overnight shutdowns.

During the last two years, Australia’s central bank has slashed interest rates to a record low 0.1 per cent to help stimulate the economy, but a range of unusual steps have been taken to steer Australia through the biggest contraction since the Great Depression. Dr Lowe specifically listed the yield target, the RBA’s purchasing of a large amount of government bonds and the introduction of a low-cost term funding facility for the banking system as among the more unexpected tools used to mitigate the worst effects of the virus that will now be reviewed.

In November 2020, the bank embarked on a $100 billion bond purchase program in Australia’s first experiment with ‘quantitative easing’. This was followed up with an additional $200 billion in two tranches of planned purchases in a bid to bring down borrowing costs and ensure a lower exchange rate.

The yield target on three-year government bonds, introduced in March 2020, was ditched earlier this month following higher than expected inflation data and a major jump in the interest rate on these bonds as a result. The bank did not target bond purchases between when this data was released and its November 2 meeting.

The RBA board’s meeting minutes for November, released on Tuesday morning, noted there was merit in reviewing the yield target and its effectiveness “as part of the broader package of monetary policy measures introduced in March 2020”.

“This would be done in 2022 and in light of additional information on the effect of the overall policy package on the Bank’s goals,” the minutes said.

The board minutes said keeping the yield target may have left the Bank buying all freely tradeable bonds in the April 2024 bond line, limiting the usefulness of the target as an anchor for other interest rates.

The bond purchase program is continuing until mid-February 2022 at which point it will also be reviewed.

“The Board’s review of the program in February 2022 will be based on the same three considerations as the previous reviews – namely, the actions of other central banks, how the domestic bond market is functioning, and the actual and expected progress towards the Bank’s goals for inflation and unemployment,” the minutes said.

The RBA is also facing a chorus of experts wanting an independent review of the central bank overall, including the IMF and the OECD, due to ultra-low interest rates, unconventional policies and years of missing inflation targets. Both the federal government and Labor have indicated their support for a review.