Suddenly, my essential status slipped to handy, useful versus crucial.

Words can change their nuances during a pandemic. I learnt that in August, stuck in a Zetland hotel, checking my phone every hour to see if the situation would change. It didn’t. Not for weeks.

The plan was simple on paper. I flew to Sydney in late July, invited to revive my dictionary role on SBS’s Celebrity Letters and Numbers. The shooting was a hoot, two mad weeks of anagrams and gamesmanship, wrapping by August 11. Which turned into 12, then 13, and so on, my life stuck in Zetland, bound by red tape as I vied to return to Victoria. 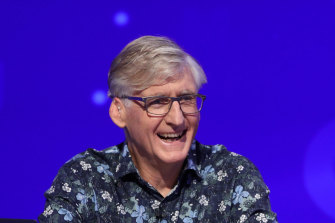 David Astle came to Sydney from his Melbourne home to film Celebrity Letters and Numbers and got stranded.Credit:SBS

The quibble was an adjective. A week before arrival, I’d been confirmed as an essential worker, my hosting role on ABC Radio Melbourne deemed a necessary thread in the social fabric, as per the employer’s letter – my abracadabra to fly back home.

Until things changed. Until delta numbers skyrocketed mid-shoot and Victorian evaluators edited their thesaurus. Suddenly, my essential status slipped to handy, useful versus crucial. Clearly, all pandemic roles are essential, but some roles are more essential than others.

I had to reapply. Twice. Over weeks. As part of the paperwork, I pledged to be healthy – with 12 nonstop negatives in my test column.

I confirmed I was fully vaccinated, receiving the A-to-Z of AZ, and naturally agreed to isolate on reaching the tarmac, but none of this meant a hill of beans. We live in contagious times, and language is often the first to sneeze. 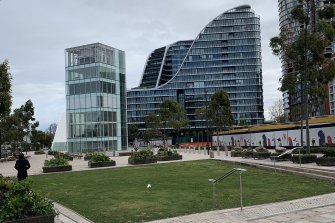 Essential hails from esse in Latin, the verb to be, as vital as life itself. At least in antiquity, but bureaucracy is another kettle of worms. Somewhere between NSW’s infection tally and Lockdown 7 in Victoria, the semantics flinched, and this black duck was stuck in Zetland.

Every morning, foraging coffee, I tried to reframe my argument. Most baristas knew my order by heart, despite my efforts to disappear. Slowly, day by day, I was joining the ecology. 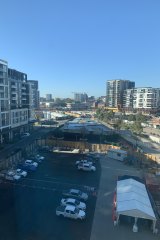 I watched a kid roller-skate and couldn’t help but think we were trapped in the same metaphor.Credit:David Astle

At my local supermarket I questioned the wisdom of buying five bananas, as my exit could well predate their ripening. How long does parsley keep? Does marmalade travel?

Fully masked, I walked to the dog park on Gadigal Avenue to solve crosswords on its edge. Omens shimmered behind the clues, where NOON hid in Twelve back-to-back refusals. Or AGEISM nested in the pun: It hinders people getting on.

Even Ann Patchett, my latest novelist crush, seemed to intuit my predicament. In her Dutch House (Bloomsbury, 2019) I met the adage: “Disappointment comes from expectation.” Amen, each and every day.

Maybe if I called myself indispensable, I told Sasha the Russian receptionist, who also missed home. Would fundamental tip the scales? From seven floors up, I watched a kid roller-skate around a fountain, lap after lap, and couldn’t help but think we were trapped in the same metaphor.

Am I essential? If not, then what am I now? Try asking that every morning, dressing for success, and doubting the language you speak.

Essence was the first of the words to arrive, around the 1300s, defined as the key element of anything, with essential relating to the central quality, the heart of the matter.

Wait, maybe that was the issue – central can’t be the same as frontline. Perhaps I’d been using the wrong geometry all along. That’s it. I needed to rejig my adjective’s coordinates. Adjust my pigeonhole’s feng shui. But first I needed a coffee. 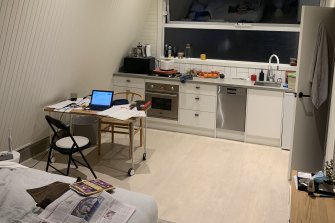 (The less-than-essential broadcaster returned to Melbourne last Friday, after 22 days in limbo. Self-isolating, he’s now confined to a converted garage – see above – not making plans.)

The Booklist is a weekly newsletter for book lovers from books editor Jason Steger. Get it delivered every Friday.