In 1962, British defence minister John Profumo became embroiled in a sex scandal with a woman named Christine Keeler. Profumo was forced to resign after it emerged that Keeler, a model and showgirl, had also been involved with a Soviet naval attaché – this at a time when the Cold War was at its height.

The events became known as the Profumo Affair, and most people know the bare bones of the story. But according to Sophie Cookson (Kingsman), the actor playing Keeler in a new BBC adaption, most people have got the story wrong. 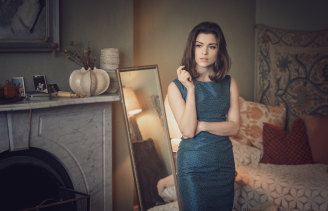 Sophie Cookson in The Trial of Christine Keeler: “This woman deserves a chance – a chance that no one ever gave her.”Credit:BBC

“It really winds me up that it’s even known as the Profumo Affair,” she says in London. “It’s always been a very male story where the women, who are so crucial to it, ironically have been cast aside. For the first time in this series, we’re actually going to hear Christine’s voice.”

The Trial of Christine Keeler, a six-parter, offers a complete perspective shift, starting with the name. It goes back to Keeler’s childhood growing up as part of a working-class family in Berkshire.

“Christine went through so much trauma even before she moved to London when she was 17,” says Cookson, who read and re-read Keeler’s autobiography for the role. “I remember reading it for the second time and being reduced to tears in a café. I thought, I’ve got to do this justice. This woman deserves a chance — a chance that no one ever gave her.” 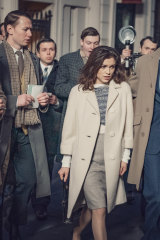 Sophie Cookson in The Trial of Christine Keeler.Credit:BBC

In Amanda Coe’s (Apple Tree Yard) script, Cookson-as-Keeler is, therefore, front and centre. The series begins in 1962, more than a year after Keeler’s affair with Profumo had ended, but as the rumours swirl, Keeler finds herself set against all of the forces of the British Establishment as they circle wagons and try to protect their man. Keeler is denounced as a prostitute and is threatened and abused verbally and physically. Cookson says that ever since, Keeler has either been ignored or cast as the villain of the piece.

“In the script, Amanda uses Christine’s own words. That’s incredibly important because she was just vilified throughout her entire life. This show is about re-addressing that balance. Finally.”

Although The Trial of Christine Keeler is set in the early 1960s, it takes place against a backdrop of a London that is anything but swinging. Profumo’s world is one of entrenched privilege, staunch tradition and clubs wreathed in cigar smoke. Keeler – young, beautiful and, in Cookson’s depiction, poised and dignified – is an affront to the very existence of the Establishment.

Says Cookson: “The elite being brought to their knees by someone from the working class! It really flips everything on its head. It [the Profumo Affair] made everyone question their own morality and where they stood; 1963 definitely changed England forever.”

Yet the irony that underpins the whole drama is the sense that perhaps things haven’t changed all that much. Men in positions of power continue to hold sway over vulnerable women. Everyone knows the name Harvey Weinstein but who can name more than one of his accusers?

Cookson says: “I would love to say we’ve moved on but it’s incredible. There are so many issues that are so relevant. Amanda [Coe] said to me that history came up to meet us with this show. She’s been writing it for a while and then the #MeToo movement came along and suddenly there was this huge galvanisation of women and women telling women’s stories.”

The series was shot in Britain last year. At the same time, stories were emerging about financier and sex offender Jeffrey Epstein and his connections with Prince Andrew.

“Working on set, there were a lot of things coming out in the news and I thought, 'this, the abuse of power, is still happening, all over the world',” Cookson says. "That’s why it’s so important that we keep telling stories like this. It reminds people that we’ve still got a very long way to go.”

In production, The Trial of Christine Keeler has at least tried to adhere to its own credo. It has two female leads (Ellie Bamber plays Keeler’s friend, Mandy Rice-Davies) and was produced, written and directed by women. 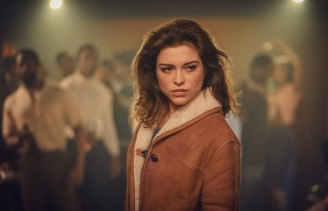 Sophie Cookson: “If playing Christine has taught me anything, it’s that you have to speak up.”Credit:BBC

“I think that really mattered for this,” says Cookson. “It did feel very important because it was about a woman reclaiming her story. Of course, it wasn’t entirely women on set: the reality is it was just more balanced than normal. And that’s really nice. Because when I started [Cookson, 29, left drama school in 2013], I didn't really question that there weren’t many women on set. I just always assumed I would be the only girl. To accept that as the status quo is weird. I’m just very relieved that it’s changing.”

But she says "changing" is not the same as changed.

“Hopefully, we’re just becoming more accepting and times are finally catching up. But then there were no female directors nominated at the Oscars, so …”

She catches herself criticising the Establishment – a young actor on the rise, about to get her first Hollywood lead opposite Mark Wahlberg in this summer’s Infinite, plenty of reasons not to upset the apple cart – and pauses. She wonders if she should go on the record condemning the Oscars, and then says that actually, yes, she really should.

“It’s important to talk about these things. If playing Christine has taught me anything, it’s that you have to speak up. You have to. Everyone tried to shut her up but she wasn't willing to play by their rules. She might have not done it in the most careful, articulate, well-presented way but her values were bang on. She didn’t want to be silenced and I think that’s a valuable lesson for everyone.”

The Trial of Christine Keeler is on BBC First, Sunday, 8.30pm.

END_OF_DOCUMENT_TOKEN_TO_BE_REPLACED

END_OF_DOCUMENT_TOKEN_TO_BE_REPLACED
Recent Posts
We and our partners use cookies on this site to improve our service, perform analytics, personalize advertising, measure advertising performance, and remember website preferences.Ok