Home » Lifestyle » The BAB is back: Biennale offers a moment of calm in the chaos

The BAB is back: Biennale offers a moment of calm in the chaos

During the pandemic most of the world’s major art events were put on ice, but this was not the case for the youthful Bangkok Art Biennale. Unwilling to lose momentum after a successful debut in 2018, the organisers hosted a huge international exhibition in 2020 that was seen only by local audiences. This year, the BAB is back for a third installment, and open to all comers. As the show coincides with the Singapore Biennale, it creates the opportunity for some serious South-East Asian art tourism over summer.

While Singapore has tried to mix it up from one Biennale to the next, using different curators and approaches, in Bangkok there is a strong sense of continuity. The show was founded by experienced curator Apinan Poshyananda who has acted as director on all three occasions. This may sound despotic, but Poshyananda is the most gracious of hosts, in some ways reminiscent of Nick Waterlow, who directed three of the best Sydney Biennales.

The theme of the show is Chaos:Calm, which is broad enough to incorporate anything, but an accurate reflection of most people’s experience of Thailand. One thinks of Bangkok with its crazy traffic and the calm of the tourist resorts or the Buddhist temples.

This year Poshyananda shared the curatorial duties with two Thai curators, Chomwan Weeraworawit and Jirat Ratthawongjirakul, and two internationals, Nigel Hurst and Loredana Pazzini-Paracciani. Each brought their own ideas to the mix, but the director’s hand was obvious in certain choices. Why not include Marina Abramovic for the third time in a row? No one could say she isn’t important. The make-up of the exhibition was also familiar: a group of international stars and a broad range of Thai artists, young, old, and – in the case of Montien Boonma – deceased for the past 20 years. The show featured a major work by Boonma that has never been previously shown.

Boonma’s sculpture of a large, hollow head of the Buddha was installed, entirely appropriately, in a temple at Wat Pho. The use of this temple complex, along with Wat Arun and Wat Prayoon, is one of the magical features of the BAB. As these sites are already tourist attractions, the Biennale can reach a more general audience. The works also gain from the setting, taking on some of the sanctity of the temples and existing sculptures.

To be allowed to use these sites, the curators have to be respectful of their original purpose and follow strict heritage guidelines. This has entailed some elaborate negotiations, as with two figures by Britain’s Antony Gormley that needed to be installed without a base. It was no easy matter to lift and reinstall a set of stone slabs, but the desired effect was worth the effort. Gormley’s sculptures stand face to face with a series of guardian figures, as if engaged in a sacred-secular dialogue across continents and epochs. 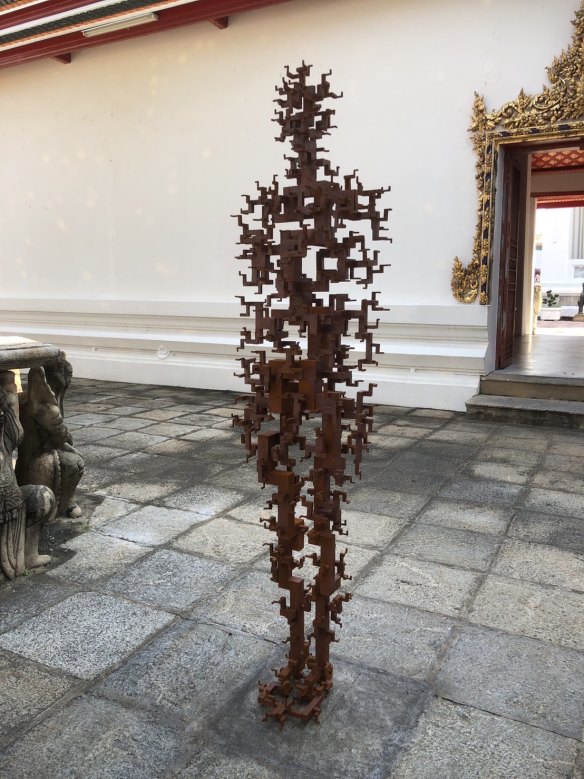 In another part of Wat Pho, Spanish artist Alicia Framis has installed two stainless-steel pyramids that double as mailboxes in which visitors may write down their fears and post them to oblivion. The piece connects with the turtles that swim in the pond attached to the temple, alluding to the way we keep our fears tucked inside our own shells.

In the nearby Sermon Hall, Yee I-lann of Sabah is showing a video of young male dancers joined by a shared headdress that looks as if it should connect them to a tree, or perhaps one central brain. To view the screen, we sit on mats woven in the traditional way by the women of Borneo, between curtains emblazoned with karaoke texts in English and Thai. These disparate elements create a lingering tension between male and female roles, tradition and contemporaneity.

Overall, there are 12 venues for this year’s BAB, one of them virtual. The temples will always have a special appeal, but the bulk of the BAB is located in the Bangkok Art and Culture Centre, with another significant component in a new basement gallery of the Queen Sirikit National Convention Centre (QSNCC). Getting from one venue to another is where the “chaos” kicks in.

I hope I don’t sound too biased in favour of work I know well if I say the outstanding painting in this year’s BAB came from the APY Art Centre Collective, represented by nine large canvases. Two of the artists, Yaritji Young and Nyunmiti Burton, were present at the opening.

One suspects this strong showing is a taste of things to come. The international art scene, now fully receptive to all things Indigenous, is embracing Aboriginal art like never before, and the painters of the APY Art Collective are ideally placed to benefit. 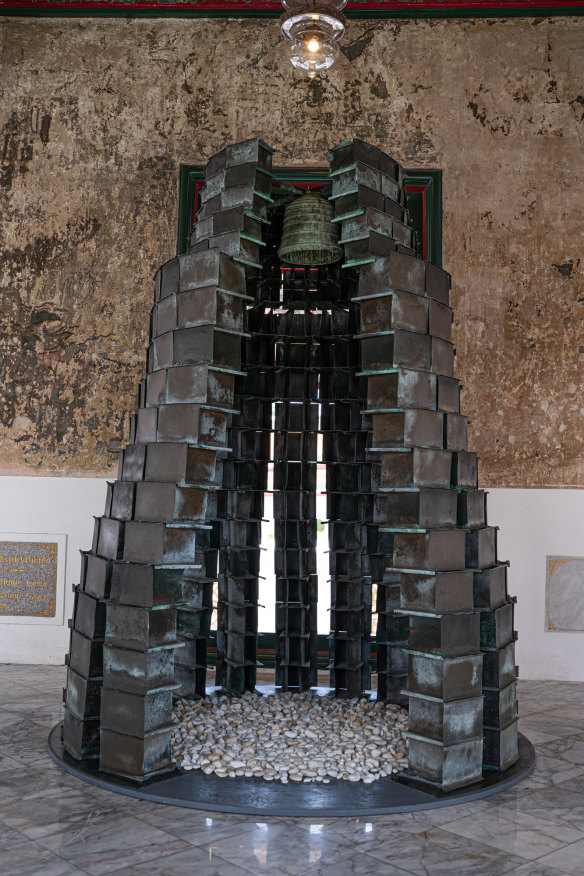 The only other Australian artist in the show was Ben Quilty, who contributed a massive “Rorschach” style painting based on Johann Zoffany’s The Death of Captain James Cook (1795). Quilty’s revision of Zoffany is called Alien, self-consciously questioning the imperialistic nature of Cook’s explorations. This is history seen through a narrow window, as a figure such as Cook can’t be understood in purely ideological terms. It’s more likely that viewers will be thrilled by the volcanic force with which Quilty trowels on the oil paint.

One undeniable highlight of the BACC display is a new video by Russian group AES+F who have been based in Berlin for a decade. This 40-minute piece, Turandot 2070, is completely absorbing in its surreal vision of a future in which cities have been transformed into massive gardens, under the rule of a brutal totalitarian system in which pleasure and punishment are fatally mingled.

Another standout work at the BACC comes from Kawita Vatanajyankur, who has collaborated with the MIT Media Lab to create an AI installation called Voice of the Oppressed. The piece features dual avatars of the artist engaged in a political debate, adopting contrary positions, though occasionally agreeing. The conversation draws on the artist’s own views and statements, and on Paulo Freire’s classic tract, Pedagogy of the Oppressed (1968). In a glass case between the avatars, Vatanajyankur will be undertaking a series of trademark performances.

Both Kawita and AES+F are BAB favourites, backing up for a second time. Among notable figures making a first appearance are Jitish Kallat, Tatsuo Miyajima, Chiharu Shiota, Tazeen Qayyum, Xu Zhen, and surprisingly, Pinaree Sanpitak, who is one of Thailand’s best-known contemporary artists. Sanpitak is represented at the QSNCC by two giant installations, Temporary Insanity (2004) and Anything Can Break (2011), which incorporate music and kinetic elements. It’s typical of this Biennale’s relaxed approach that these acclaimed older pieces are being shown, with no demand for new work.

The big surprise for me during my stay in Bangkok was Jake Chapman, who has split from his brother, Dinos, and is pursuing a solo career. I’ve always found the Chapman Brothers’ work to be wilfully nasty and provocative, and the BAB installation is no exception, being a room full of tiny models in which Nazis and characters associated with the McDonald’s fast food chain re-enact scenes from Goya’s famous print series The Disasters of War (1810-20). Yet where this generation of no-longer-Young British artists often comes across as a bad comedy routine, Chapman revealed an intellect and knowledge of art history quite at odds with most of his peers. While this doesn’t preclude a singularly bleak view of the human condition, maybe that’s only realistic. The state of the world today would provide Goya with no shortage of inspiration. The trick, this Biennale suggests, is to remain calm in the midst of chaos.

To read more from Spectrum, visit our page here.