I probably don’t need to tell you that the second semester of your senior year of college is not the ideal time to start a relationship. And I wasn’t looking for one, honest. But then I met someone at a party one night in January, and suddenly I was going on lunch dates, spending my nights on his couch watching movies, and telling my mom about him on the phone. Then the relationship (if you could even call it that) ended with a text message, and believe it or not, it’s probably the best rejection text I’ve ever received. Allow me to explain.

At 22, I had never been in a serious relationship, unless you count my boyfriend from first grade who I married at recess (and then again dated for a month in seventh grade. We went on a single movie date to see Will Ferrell’s Kicking & Screaming in theaters. It was a group date, and I sat five seats away from him. It was very romantic). I wanted a boyfriend, badly, but I would have never admitted it. In my friend group, coupling up was considered basic and boring behavior. Instead, I declared openly and often how much I loved being single and "on the prowl." Of course, soon after I met the guy in question — which led to a two-hour conversation and a quick makeout sesh in the middle of the party — I fell hard. Despite all my protests, it seemed that I might finally get the chance to change my Facebook relationship status at long last.

Except there was one problem. Said boy did not want to be my boyfriend. He did want to have an exclusive relationship, and engage in PDA, and to post pictures of us together on social media, but he didn’t want to "put a label on things." Excusez-moi? Any time that I so much as spoke to another guy at a bar, my not-boyfriend would swoop in within seconds to put his arm around my shoulder and claim me as his. This probably should have been setting off some alarm bells in my head, but instead I was thrilled. I was claimed. I was happy to go along with whatever he wanted, as long as he continued to assure me that I was, in some way, his.

Things came to a head right before the beginning of spring break, when my not-boyfriend not only refused to DTR, but suggested that if we happened to hook up with other people during our respective booze-filled vacations, it would be OK with him. As you can probably guess, I wasn’t quite as down with that plan. I did end up hooking up with someone else in Punta Cana as revenge (because I am #mature), but when we returned to school, everything went back to the way it had been before we left. Graduation approached. We avoided talk of the future. The night before we received our diplomas, he didn’t want me to spend the night, and when I refused to leave, he left instead, and I slept in his bed alone. We didn’t speak again until I sent him this message:

In a long message back, my not-boyfriend outlined everything that he felt wasn’t working between us: We wanted different things, we were going different places, and it wasn’t meant to be. He concluded with this: 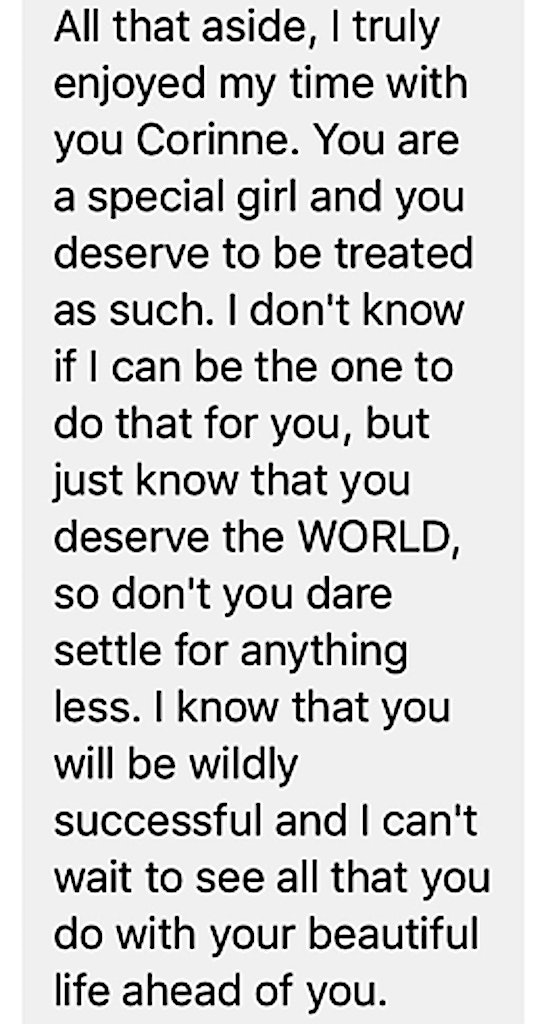 I’d be lying if I said these words didn’t ignite a spark of hope in me: "Special." "Deserve the world." "Beautiful." But he couldn’t have made it clearer that I wouldn’t get the things I wanted from him, and he was telling me this in the kindest way possible. Those kind words didn’t mean that we still had a chance — they were meant to help me move on. I’m not sure I even realized at that point in my life that I deserved something more than what my not-boyfriend had given me, which was not nearly enough.

A few weeks later, my not-boyfriend changed his profile picture to one of him and a blonde woman on his boat, the same boat he used to talk about taking me out on someday. His relationship status had changed, though he’d never been willing to change it for me. It pained me, and I was in pain for a long time. Eventually, I convinced myself to create a Tinder account. Just for fun, I told myself. Just to distract myself.

That was five years ago. In October 2014, five months after my not-boyfriend told me that he couldn’t be my person, I met my person. After a month of dating, he asked me if he could be my boyfriend. I said yes, and we both changed our relationship status on Facebook (because that was still a thing people did then). I didn’t belong to him — we belonged with each other and to each other, and it was only after finding the right person that I understood the difference.

We don’t talk anymore, me and my not-boyfriend. We don’t follow each other on social media anymore, so he cannot see that I’ve been married to the wonderful man I met on Tinder for almost a year now, and that I’ve published a book, and that I am, in fact, living my beautiful life to the fullest. I don’t know whether he is still with that blonde woman from the boat or whether he is happy. But I wish him well, and I’ll always be grateful for him. He broke my heart, but he also spared me the pain of once again falling for someone who didn’t want the same things I did (or understand that you need to use a comma before addressing someone). Who would have guessed that rejecting me was the kindest thing he could ever do?