The nominations for this year’s television Emmy Awards have been swept by first-time nominees, representing the most significant changing of the guard in the last decade.

The two most nominated programs – The Crown and The Mandalorian, with 24 nominations each – are well known to television audiences. 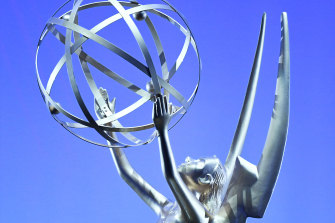 The muse of art, upholding the electron of science, also known as the Emmy.Credit:Kevin Winter/Getty Images

Trailing The Crown and The Mandalorian in total nominations are WandaVision (with 23 nominations), The Handmaid’s Tale (21), Saturday Night Live (21), Ted Lasso (20), Lovecraft Country (18), The Queen’s Gambit (18) and Mare of Easttown (16).

Of those seven programs, five are making first-time appearances in key Emmy categories.

In part that is due to the shifting content landscape, throwing once-fringe titles to the centre of the stage. But it has also been impacted by some shows retiring – case in point: last year’s awards hoover Schitt’s Creek – and impacts on production from COVID-19, which delayed some shows, such as Succession, pushing them out of the eligibility window. 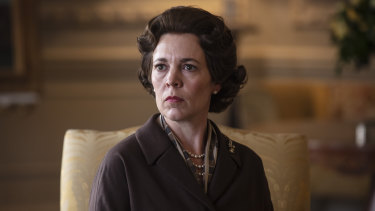 The nominations also reflect an impactful year of female-led drama: Kate Winslet’s Mare of Easttown, Anya Taylor Joy’s The Queen’s Gambit and Elizabeth Olsen’s WandaVision. All three have made impressive showings in the nominations.

On a network vs network basis, HBO and HBO Max lead the nominations with 130. Netflix, whose awards night ambition has long been to upset the applecart, was narrowly pushed into second place with 129. Which means HBO wins the day, but only by a whisker.

The next most competitive players on the stage are Disney+ with 71 nominations and the free-to-air network NBC with 46. The margin between the two top-scoring platforms and their nearest competition is dramatic, a revealing illustration of how far ahead HBO and Netflix have surged in recent years.

Australian actor Yvonne Strahovski has been nominated in the supporting actress in a drama series category for her work on The Handmaid’s Tale. 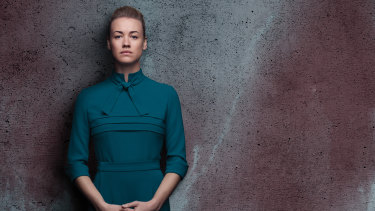 Australian actor Yvonne Strahovski was nominated for her turn in The Handmaid’s Tale.

New Zealand-born director Jessica Hobbs, who has worked extensively in Australian television on series including Love My Way, Tangle, The Slap and Rake, has been nominated for her work on The Crown.

Hobbs is one of three female directors in a field of six in the drama directing category; the others are Julie Anne Robinson, nominated for her work on Bridgerton, and Liz Garbus, for The Handmaid’s Tale. (The other three nominees are Benjamin Caron for The Crown, Jon Favreau for The Mandalorian and Steven Canals for Pose.)

Another Kiwi, cinematographer Baz Idoine, has been nominated in the outstanding cinematography for a single-camera series (one hour) category, for his work on The Mandalorian’s gripping season finale, The Jedi. 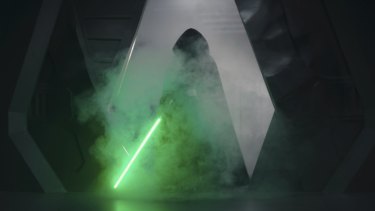 Cinematographer Baz Idoine nominated for his work on the thrilling Mandalorian finale (pictured).Credit:Disney+

One noticeable oversight is Australian actor Nicole Kidman, who did not score a nod for her work on The Undoing. The series, which drew wide acclaim, was also shut out of the limited series category. Only Kidman’s co-star Hugh Grant made an appearance in a key category.

As they are each year, the full nominee list will be scrutinised in the comic Frank Scherma, the chief executive of the Academy of Television Arts and Sciences, whose industry members vote for the Emmy nominations and winners, said this year’s nominees reflected the connection between content and audiences in a difficult pandemic year.

“Television has provided a lifeline for so many around the globe, delivering a constant source of entertainment, information and inspiration during some of our most difficult days,” Scherma said.

“We are thrilled to honour the diversity of storytelling in television today by recognising talented artists, programs, producers, directors and craftspeople throughout our industry and celebrating their commitment to this extraordinary medium.”

The winners of the 73rd Primetime Emmy Awards will be announced in a telecast from the Microsoft Theatre in Los Angeles on September 19.

The creative arts categories, including production design, wardrobe, editing, directing, writing, guest actor, main title design and sound, will be announced at the 73rd Annual Primetime Creative Arts Emmy Awards; no date or venue has been announced yet.

List of nominees for the 73rd annual Emmy Awards