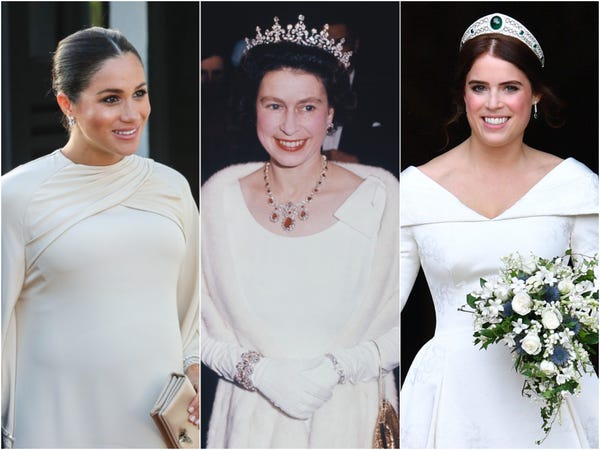 The royal family is made up of powerful women.

Before she was crowned, the Queen could be seen as a feminist icon. During World War II, the then-19-year-old Princess Elizabeth became the first female royal to join the Armed Services full-time.

Then there's Meghan Markle, who has been advocating for women's rights since the age of 11, when she convinced Procter and Gamble to change a sexist dish soap commercial.

Princess Charlotte made history upon her birth in 2015, becoming the first royal to be affected by the Succession to the Crown Act (2013). The new law meant Charlotte and future generations of female royals would no longer lose their place in line to the throne to their younger male siblings.

The change to the line of succession was a step in the right direction, as was the Queen's Letters Patent (2012), which decreed that the Duke and Duchess of Cambridge's children would all be given prince or princess titles.

Still, the British monarchy has a long way to go when it comes to gender equality.

The Queen could be seen as a feminist icon, but she hasn't been treated as such

As the world's longest-serving monarch, Elizabeth II is viewed as a role model for women.

And yet, the only reason we have the Queen instead of a king is arguably by default. Her Majesty's father King George VI only had daughters, but if the Queen had had a younger brother, the previous law would have dictated that he overtake her in the line of succession.

Despite being the reigning monarch, the Queen's title is traditionally considered lower in rank than a king.

This could explain why Prince Philip wasn't given the title of King consort and wasn't crowned during the monarch's coronation in 1953. In comparison, Kate Middleton will be able to use the title of Queen consort when Prince William is crowned, because it can be a symbolic title.

"Unless decided otherwise, a Queen consort is crowned with the King, in a similar but simpler ceremony," the royal website states. "If the new Sovereign is a Queen, her consort is not crowned or anointed at the coronation ceremony."

The title of queen can mean either a "female monarch" or "wife of the monarch," while a king can only ever describe a reigning monarch, according to Mental Floss' Ellen Gutoskey.

Philip was ultimately made a prince consort, perhaps to signal that his role is significantly lower-ranking than his wife's.

The monarchy should consider making future male consorts kings to show the title does not stand as a threat or overpower a queen.

Even if the royal family changed this tradition, there's another old-fashioned rule that would have prevented Philip from inheriting the king title: The majority of royal and noble titles are only passed down to men born into the family.

When Princess Charlotte was born in 2015, she was the first royal to be affected by the Succession to the Crown Act, which meant she — and female royals after her — couldn't be overtaken by a younger male sibling in line to the throne.

Before the Duke and Duchess of Cambridge's eldest child, Prince George, was born, Her Majesty decreed all of their children would be princes and princesses. The previous rule, issued by King George V in 1917, stated that only the eldest son of the Prince of Wales' eldest son was to be made a prince, as well as the monarch's grandchildren through the male line.

But the Queen's Letters Patent — which mirrored the Succession to the Crown Act which was in the process of being approved in Parliament at the time, according to royal historian and author Carolyn Harris — only affected the Cambridge children; it didn't change the outdated traditions that prevent royal women from receiving the same titles and privileges as men.

And when men in the royal family come of age or get married, they are eligible to receive a new title. However, most royal women are unable to inherit new titles on their own merit because the majority of dukedoms and earldoms can only be inherited through the male line, or through marriage to a man who holds the title.

For example, the Queen's youngest son Prince Edward was granted a noble title upon his marriage to Sophie Rhys-Jones, making them the Earl and Countess of Wessex. The couple's eldest child, Lady Louise Windsor, likely won't inherit her father's title — but her younger brother, James, Viscount Severn, would be eligible.

"Most peerages are in the male line only with some exceptions," Marlene Koenig, an expert on British and European royalty, told Insider.

Females in the family can usually receive a new title if their husband is granted one, as was the case with Princess Margaret's husband.

This is uncommon in recent times.

Koenig added that there are a small handful of dukedoms and earldoms that royal and noble women can inherit, including the Dukedom of Marlborough and the Dukedom of Fife.

'The first son is the heir, the second son is the spare, and the women aren't needed'

One person who understands the complexities of titles is Lady Liza Campbell — the second daughter of Hugh Campbell, 6th Earl Cawdor — who joined a campaign to change the law in 2014.

She became a member of a group of aristocratic women named "The Hares," who proposed a bill that would allow female heirs to inherit titles and peerages, as per The Guardian.

"I was initially very reluctant to do it because I don't use my title, so I didn't want to get involved with those kinds of things," Campbell told Insider. "But then I thought, it is about feminism, I need to stop feeling embarrassed about being attached to it."

Ultimately, the bill wasn't passed through Parliament because there was "a massive lack of interest," Campbell said.

"In the royal family, the first son is the heir, the second son is the spare, and the women aren't needed," she said. "They are by the wayside, so it's an unfair system."

"I think any civilized man in the 21st century who grows up with sisters knows it's a medieval system being upheld by dinosaurs," she added.

There were high-profile women from aristocratic households who openly opposed the bill.

One such woman was Emma Manners, Duchess of Rutland, who told The Express in 2016 that she was glad her daughters wouldn't inherit the family dukedom.

"Repression, at its most effective, is when you get the repressed to enforce the repression," Campbell told Insider.

Some of the sexism royal women face isn't at the hands of the monarchy, but the institution hasn't tried to prevent it from occurring.

For instance, the palace's "no comment" policy to the press means that royal women aren't permitted to respond to stories written about them, including ones that dabble in sexist stereotypes and shallow rumors.

Markle addressed the palace's policy earlier this year, saying she was "unprotected" by the press team and wasn't allowed to respond to false stories.

"There's the sexism that's not necessarily enforced by the royals, but that the royals rarely choose to call out, and thus, allow to flourish in the broader culture," royal commentator Kristen Meinzer told Insider. "For example, Kate Middleton to some degree and Meghan Markle to an enormous extent were labeled 'social climbers' when they married into the royal family, despite the fact that Kate came from a family of self-made millionaires and Meghan was a self-made millionaire herself."

Middleton was given the nickname "Waity Katie" by the UK tabloids before her royal wedding in 2011, while Markle was named Britain's top social climber by high-society magazine Tatler in 2019.

The accusation of "social climbing" was never made towards men who married into the family, such as Mike Tindall, husband of the Queen's granddaughter Zara Phillips, Meinzer said.

This is also apparent when comparing the press coverage of Middleton and Markle's alleged feud to Prince William and Harry's.

Markle and Middleton's rift was written in the press as originating from a reported disagreement during Princess Charlotte's bridesmaid dress fitting.  In comparison, Harry and William's reported feud was first portrayed in the media as being about something far more serious: the quick timing of Harry's engagement to Markle.

It's about more than just the royal family

While recent changes to the line of succession and Her Majesty's Letters Patent show the monarchy is taking some steps towards a more equal institution, it could do far more to battle sexism.

The changes to the line of succession only affect royals born after 2013, like Prince Charlotte. It didn't make a difference to women who were already in line to the throne, sending the message that they should be valued less than their brothers.

Princess Anne, for example, remains fourteenth in line to the throne, behind her younger brothers Prince Andrew and Prince Edward.

Campbell said making these changes is about more than just the royal family.

She argued that changing the law surrounding titles and succession could act as a symbol of how we should be treating women in our society. "It's about pointing out the misogyny within families," she said.

"You may not agree with this," she added, referring to the existence of the monarchy, "but just see it as a prejudice that should be addressed."

This age-old concept that men are more powerful than women is ingrained in our society. Even in card decks, a king is considered a higher value than a queen. Similarly, in chess, the game is only over when you take out the king.

"It takes us a long time to notice things," Campbell said. "But when we do, we are in a position to do something about it."

Buckingham Palace did not respond to Insider's request for comment for this article.

END_OF_DOCUMENT_TOKEN_TO_BE_REPLACED

END_OF_DOCUMENT_TOKEN_TO_BE_REPLACED
Recent Posts
We and our partners use cookies on this site to improve our service, perform analytics, personalize advertising, measure advertising performance, and remember website preferences.Ok