Home » Lifestyle » ‘The price was not in the brief’: Minister ignorant of $30m paid for airport land

‘The price was not in the brief’: Minister ignorant of $30m paid for airport land

Former urban infrastructure minister Paul Fletcher has pleaded ignorance over taxpayers handing over $30 million for a piece of land next to the Western Sydney Airport in 2018 in a deal excoriated by the Auditor-General.

Infrastructure Department officials didn't tell the minister the sale price for the 12 hectares of land, which the Commonwealth valued at just $3 million a year after the purchase. 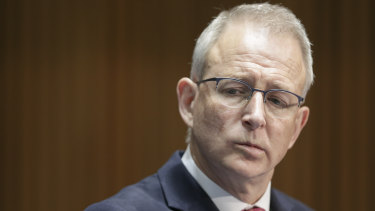 Minister Paul Fletcher says his department kept him in the dark over the $30 million price tag for a piece of land taxpayers bought near the Western Sydney Airport.Credit:Alex Ellinghausen

The land, known as the Leppington Triangle, was owned by Liberal Party donors Tony and Ron Perich's Leppington Pastoral Company. The company is now leasing it back from the Commonwealth on the basis of yet another valuation that has it worth under a million dollars.

But Mr Fletcher, who was urban infrastructure minister at the time of the deal and now the Communications Minister, says he only became aware of the issue when he read the auditor-general's report, which was released on Monday.

"[The price] was not in the brief that came to me, that's what the auditor-general's report says," Mr Fletcher said on Wednesday.

"This information was not provided even to senior officials of the department, let alone to the minister."

The audit report says department officials did not act ethically when briefing their superiors and ministers.

None of the 10 written briefings on the sale included the price nor the information the department intended to pay a rate 20 times higher than what the NSW government planned to pay for its portion of the same land.

Opposition infrastructure spokeswoman Catherine King said it was unbelievable the minister wouldn't have asked for the price or whether it was value for money for taxpayers.

"It is just absolutely incompetence of the highest order to not bother – he needs to say what did he do to inform himself that what he was signing off on was value for money, that the processes had been undertaken correctly," she said.

"Were there any instructions by ministers about how this landholder was to be handled?

"We've got the government just about to withdraw economic support from many people on JobKeeper; we're suddenly seeing that they're quite happy to basically piss $30 million up against the wall."

Labor intends to pursue the matter through parliamentary committees and the estimates process in October.

END_OF_DOCUMENT_TOKEN_TO_BE_REPLACED

END_OF_DOCUMENT_TOKEN_TO_BE_REPLACED
Recent Posts
We and our partners use cookies on this site to improve our service, perform analytics, personalize advertising, measure advertising performance, and remember website preferences.Ok