Netflix may be doubling down on true crime docuseries right now, but its best new documentary offering features a 70-year-old essayist who's had writer's block for several decades providing her verdict on everything that's wrong with the world. Directed – with obvious pleasure – by Martin Scorsese, Pretend it's a City is a thoroughly enjoyable engagement with the witticisms, dismissals, and irascible philosophy of Fran Lebowitz. The only blood spilt here is metaphorical. 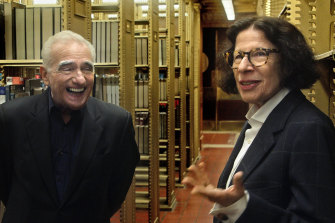 Martin Scorsese and Fran Lebowitz in Pretend It’s a City.Credit:Netflix

"How would you describe your lifestyle?" asks an audience member at one of the many speaking engagements that constitutes Lebowitz's paid work. "How would I describe my lifestyle?" she replies. "Let me assure you, I would never use the word 'lifestyle'." In her uniform of suit jacket, button-up shirt, and blue jeans, Lebowitz is the definitive New Yorker: a gay outsider who arrived in the 1970s, worships the city, and catalogues its eccentricities and issues. Her preferred sport is watching people on the subway.

Not so much a contrarian as a critical voice that refuses to be authoritative, Lebowitz is perpetually amusing. For evidence see Scorsese, often on camera with her. Sometimes he's the interviewer and sometimes he's the second banana, a high culture Hank Kingsley to her Larry Sanders. Either way he's often laughing uproariously and slapping the arms of his chair as his friend riffs on everything from the musical Evita to why she considers young children the least annoying people.

In 2010, Scorsese directed Public Speaking, a feature documentary about Lebowitz. That they're reunited for a Netflix series a decade later says a great deal about both screen culture and screen commerce. Scorsese's use of movie clips and a typically eclectic soundtrack is as digressive and illuminative as Lebowitz's commentary. His needle drops run from a Velvet Underground track to Luchino Visconti's 1963 cinema classic The Leopard, while the veteran cinematographer Ellen Kuras captures Lebowitz in her Manhattan habitat.

Netflix wants to be all things to all viewers. Its drive to be all-encompassing has come to pass in scripted series, where The Crown, Russian Doll, and Witcher work to cover every relevant quadrant, and just last week the announcement of its 2021 movie slate suggested it will resemble a multiplex with new titles every Friday. As a valuable niche, docuseries will be no different. It's just that the plan isn't quite as far along yet, meaning we're still at the stage where the contrasts stand out.

Fran Lebowitz's preferred sport is watching people on the subway.

In the last six months the documentary genre that Netflix has most thoroughly explored is true crime. Just last week it released Night Stalker, a four-part immersion in the nightmarish crimes of and hunt for Richard Ramirez, a serial killer who terrorised Los Angeles in the mid-1980s. The show's focus is the impact the "Night Stalker" crimes had on victims, investigators and reporters, which is told through both horrifying crime scene photos and unnecessary snatches of recreation.

The streaming service's true crime commissions have struggled with where to position their lens, sometimes choosing a disreputable viewpoint. Last year's The Disappearance of Madeleine McCann, which explored the most high-profile missing child case of this century, was worryingly committed to the various lurid theories that vexed the investigation by Portuguese police. It stuck with discredited solutions, including the guilt of McCann’s parents, over numerous episodes, only to let them fade without acknowledging their flaws.

Another recent British true-crime docuseries on Netflix, The Ripper, does a better job re-appraising the pursuit of another serial killer, Peter Sutcliffe, who murdered more than a dozen women (and attacked more) in Yorkshire between 1975 and 1980. The recreations are chillingly evocative, but here the underpinning theme is the failings of authorities. Because many of the victims were sex workers, police were initially slow or even unwilling to offer more than a cursory investigation until the case's notoriety became a public obsession. 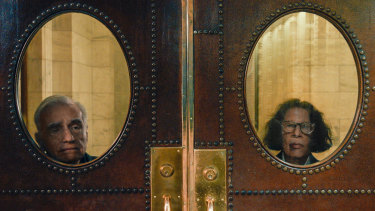 The long-time friends have collaborated for a second time in Pretend It’s a City. Credit:Netflix

It's a long way from Night Stalker and The Ripper to Pretend it's a City (although the Netflix recommendation algorithm is capable of truly unexpected segues), but they're all part of the tech giant's immersive business model. You like documentaries? Here's a lot of documentaries. You can separate them however you like, but don't make the mistake of writing some off as guilty pleasures. "Pleasure never makes me feel guilty," declares Fran Lebowitz, one of her many opinions that thankfully ring true right now. Hopefully Pretend it’s a City is not going to merely be an outlier.