In this sneak peek of the new show ‘Behind Every Man,’ Usher credits his mother’s business savvy with helping to launch his record-breaking career.

Usher is praising his momager, Jonnetta Patton, in the premiere episode of OWN’s new series, Behind Every Man. And the 42-year-old is admitting that his mother’s business savvy paved the way for his first hit song. “We created an album that would give me my first number one record and the name of that album was ‘My Way,’” Usher says in this EXCLUSIVE preview clip obtained by HollywoodLife.

But the road to success for Usher wasn’t a smooth one, as is revealed during the episode. In this sneak peek, Jonnetta reveals how she and her son were able to bounce back after his self-titled first album failed to be a success. 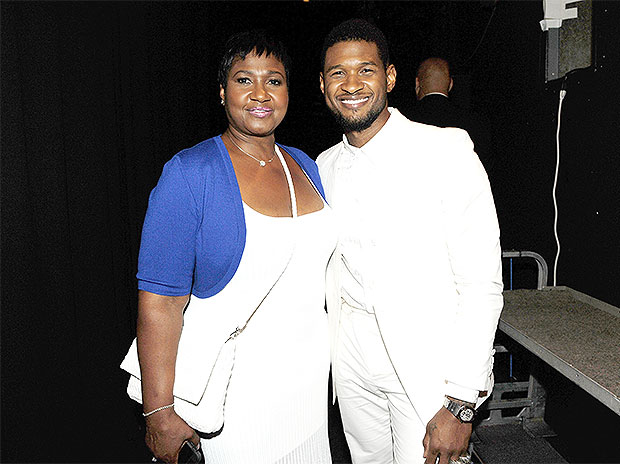 Released in 1994 when Usher was just 16, it was produced by Diddy and L.A. Reid. But, after it didn’t live up to its promise, Jonnetta (a self-taught music manager) took her son’s career into her own hands.

“During the time between that first record and then the second record, I worked in silence,” Usher’s mother says in the clip above. “I didn’t tell the record label what I was doing. So now Usher said, ‘This time I’m gonna do it my way.’ So L.A. said, ‘OK, all right Usher.’”

Jonnetta adds, “See, they wanted him to be this bad boy image. Usher’s not a bad boy. That’s that whole image that they wanted. It didn’t work. So Usher said, ‘I’m gonna do it my way.’ And that’s basically what we did.” She adds, “So what see on ‘My Way,’ you just see raw talent.”

To my one and only 1st love … Momma in the difficult-est of times you always know how to put a smile on my face. 😆 You taught me to love myself and if I ever felt like I had no love … you will always love me. In good or bad times… ok…..You ain’t actually say that lol… but it sounds great and is actually is somethin’ you would say … lol. #momisalwaysright I LOVE YOU SO MUCH . The HAPPIEST of MOTHER’S DAY to you!!! Love BIG TIME

Usher believes that it’s his mom’s foresight that put him in the position of success. In this episode of Behind Every Man, viewers will see how the time and money that Jonnetta invested in her son’s career paid off for them both. To date he has sold more than 100 million records worldwide.

“This is a true testament to an entrepreneurial woman who just really made it a lot easier for me to just focus on my craft, while she was able to climb this ladder and have one of the largest acts of this time. She was just no nonsense and I reaped the benefits of that,” he says.

Usher and Jonnetta’s story will air in full on OWN on Nov. 7 at 10pm ET/PT. The series will go on to feature Ne-Yo and his wife Crystal Smith, Wyclef Jean and his wife Claudinette, and the gospel powerhouse couple, Kirk and Tammy Franklin.

END_OF_DOCUMENT_TOKEN_TO_BE_REPLACED

END_OF_DOCUMENT_TOKEN_TO_BE_REPLACED
Recent Posts
We and our partners use cookies on this site to improve our service, perform analytics, personalize advertising, measure advertising performance, and remember website preferences.Ok