Preparing Christmas dinner is a mammoth task for anyone, but when you’re catering for guests with varying dietary requirements it can be extra tricky.

But those hoping for a meat-free festive feast this year might have it a little easier, as the UK’s first vegan butcher has launched an all-in-one plant-based Christmas box, to save those who avoid meat from the typical dry nut roast.

Rudy’s, the vegan hotspot behind north London diner and ‘butcher’, launched the box with a plant-based turkey-like centrepiece, which feeds four for £55.

The boxes first went on sale on Sunday and sold out within an hour, and will now be available to buy every Sunday. 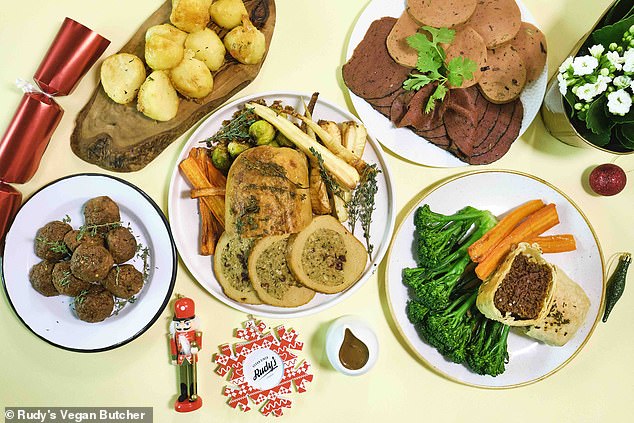 Rudy’s, the vegan hotspot behind north London diner and ‘butcher’ has launched a box with a plant-based turkey-like centrepiece which feeds four for £55

Vegans can dine on the Christmas Turk’y roll with cranberries and hazelnuts – a succulent seitan Turk’y packed with soysage stuffing accompanied by a generous serving of Turk’y gravy with fresh rosemary, thyme and garlic.

Each feast comes with all the traditional trimmings for the ultimate Christmas dinner including King Edward potatoes, parsnips, carrots, Brussel sprouts with baycon bits, all perfectly seasoned and ready to roast.

Extras in the box include pastrami, seasonally spiced Christmas ham, meat-free meatballs, and a meatloaf, wrapped in crisp, flaky pastry.

Each box is also packed with popped water lily seeds in three flavours; dark chocolate and raspberry, paprika and Provençal herbs, or the Cheezy vegan – nutritional yeast and black pepper. 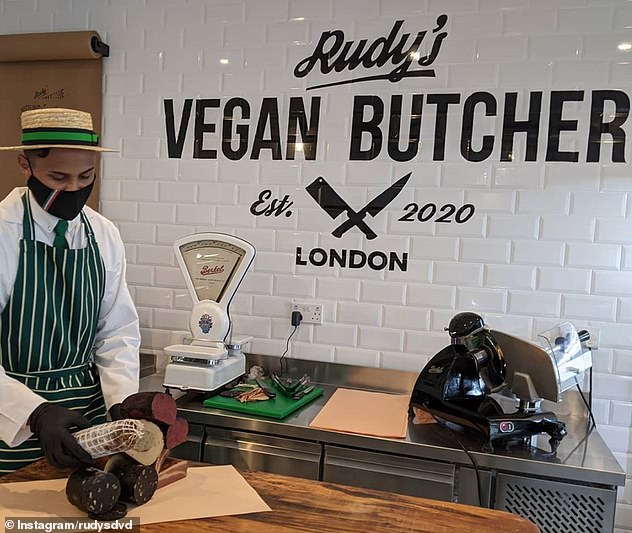 For £55, the festive feast will feed four people or two hungry vegans looking to fill up the lost days between Christmas and New Year with leftovers.

Rudy’s, the UK’s first permanent vegan ‘butcher’ opened in London on World Vegan Day, November 1, and serves faux versions of bacon, chicken, and turkey made from soya and seitan. 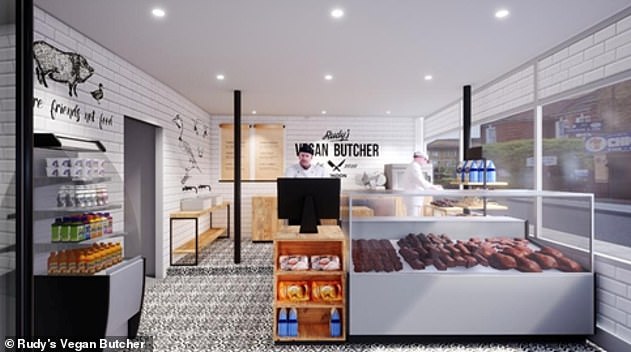 Ahead of its launch, the eatery released a mocked-up photos of its produce, which looks just like a traditional butcher, though all its items are entirely plant-based 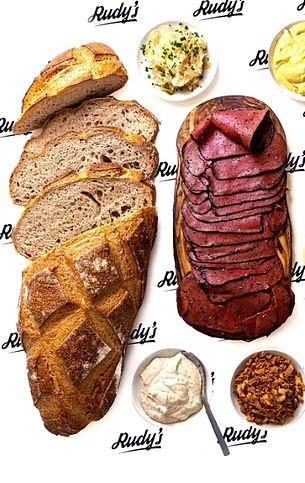 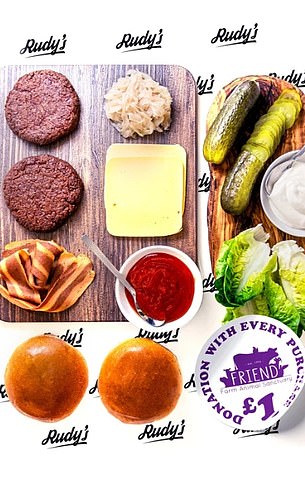 For those outside of London who want to get their hands on some vegan meat, Rudy’s will be delivering nationwide – with all orders on World Vegan Day coming with a free pack of baycon. The shop – which also has its own restaurant in Camden – already sell DIY kits at home (pictured)

On it’s opening day, it sold out within an hour, with queues around the block, and more than 100 online orders in the day.

Sharing a video of the huge queue for the butchers on Instagram, Rudy’s wrote: ‘This was the line at 10:54am before we even opened and it didn’t slow down for hours! 100 online orders in the first ten minutes!

‘Thank you to everyone who stopped by, messaged with love, ordered online and and shouted out our news. It was an unbelievable turn out.

‘We are so blessed to have your support and feel overwhelmed by all the love. THANK YOU, thank you a million times and more.’

END_OF_DOCUMENT_TOKEN_TO_BE_REPLACED

END_OF_DOCUMENT_TOKEN_TO_BE_REPLACED
Recent Posts
We and our partners use cookies on this site to improve our service, perform analytics, personalize advertising, measure advertising performance, and remember website preferences.Ok