Woman is forced to defend an innocent photo of herself reading a book after critics mock one ‘disgusting’ detail – so can you spot it?

A woman has been forced to defend a photo of herself reading a book after thousands thought she was sipping on a cup of baked beans instead of hot chocolate.

The avid reader shared a snap of a book she was reading and her hot chocolate filled with mini marshmallows on a Facebook group but didn’t expect the barrage of ‘shocked’ responses it attracted.

Many mistook the sweet treats as beans and immediately flooded the comments section to mock her snack choice. 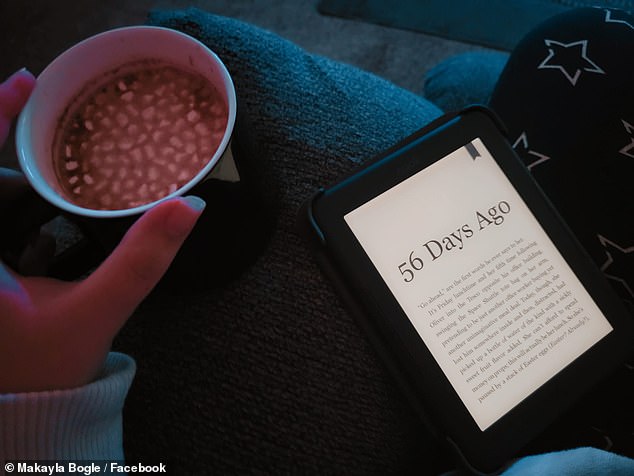 A woman has been shocked by the attention she got from the innocent photo she shared online of her e-reader and hot drink. Many thought the bookworm was holding a mug of beans

‘Warm drink and the last few chapters of a book,’ the woman innocently wrote with a love heart emoji and a picture of her reading set-up with the controversial beverage.

‘That looks like you’ve emptied a can of beans into your cup,’ one Facebooker said.

‘I thought it was beans. Wasn’t mad about it either. May make myself a cup of beans for my next read now,’ wrote another.

‘I wanted to love this post. But the beans???? Omg I’m watching a comedian on Netflix. I laughed harder at this!’ a third exclaimed.

‘Me to my daughter: does this look like a mug of baked beans? Daughter:…is it NOT??’ a fourth joked.

‘I DIDN’T EXPECT THIS TO BLOW UP AND IT’S NOT MF BEANS IT’S HELLA MARSHMALLOWS IN SOME HOT CHOCOLATE,’ the poster ranted.

‘Should I have made tea instead? I’m never posting pics of hot chocolate again in this group.’

She did see the funny side of the viral mix-up and laughed in the comments that she ‘doesn’t even like beans’.

‘I don’t know how anyone couldn’t realise that’s hot chocolate,’ one woman wondered.

‘I just have to say that this post and the whole comment section has brought serious joy to my night!’ said a second.

‘I’m so amused by the fact that the caption says ‘warm drink’ yet people immediately thought ‘beans’,’ replied another.