Home » Sport » A 24-year-old fighter poleaxed her opponent with a manipulative one-punch knockout, stealing the One Championship show

A 24-year-old fighter poleaxed her opponent with a manipulative one-punch knockout, stealing the One Championship show 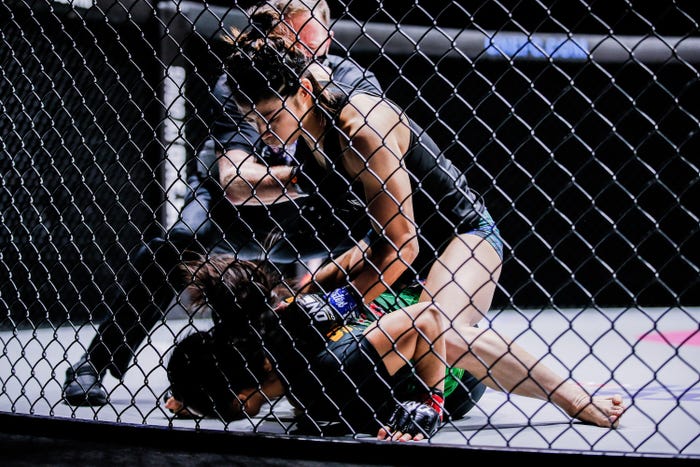 A 24-year-old fighter poleaxed her opponent with a one-punch knockout, stealing the show at One Championship's weekend event.

"Inside The Matrix 2" was One Championship's fourth broadcast from the Singapore Indoor Stadium in Kallang, having previously held pandemic-era residencies in Thailand, Japan, and China.

A women's atomweight MMA match between Meng Bo and Priscilla Gaol was the first of five fights on the November 6 show but it produced a finish so awesome it would have captured headlines by itself.

Power puncher Bo put Gaol on the floor with a single blow in the opening round, having commanded the middle of the cage while attacking and defending with authority.

The first minute was largely a feeling-out stage as both competitors sought to get a feel for the range between themselves, throwing kicks at half force.

That all changed in the second minute when Gaol increased the tempo. This was, perhaps, a costly mistake to make as it brought the beginning of the end of the 115-pound contest.

After 75 seconds of action, you can see in the video below that Meng begins rehearsing the eventual knockout-winning sequence.

It is a clever overhand right — a punch thrown with the intention of causing a bruising KO.

But the reason it is so clever is because she leads with her left, doing so not to jab but to swat Gaol's right hand out of the way, thus opening a clear route to her face.

With Gaol's shield removed, Bo could land her arrow.

With victory, the Chinese athlete advanced her pro MMA record to 15 wins against five losses.

Elsewhere on the card, Kiamrian Abbasov retained his One welterweight championship title with a come-from-behind technical knockout win over James Nakashima, who surrendered his undefeated status in the Singapore cage that night.

Earlier in the evening, Eko Roni Saputra submitted Ramon Gonzales with a rear-naked choke in the first round.

END_OF_DOCUMENT_TOKEN_TO_BE_REPLACED

END_OF_DOCUMENT_TOKEN_TO_BE_REPLACED
Recent Posts
We and our partners use cookies on this site to improve our service, perform analytics, personalize advertising, measure advertising performance, and remember website preferences.Ok