Home » Sport » All-Ireland Camogie Championship 2021: Cork and Galway to meet in final after wins over Kilkenny and Tipperary

All-Ireland Camogie Championship 2021: Cork and Galway to meet in final after wins over Kilkenny and Tipperary 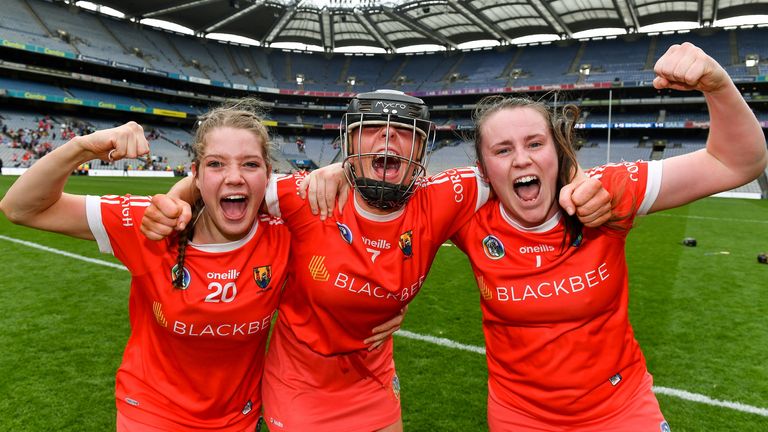 Cork and Galway will meet in the All-Ireland Camogie Championship decider, after narrow wins at Croke Park.

Captain Linda Collins shook off the disappointment of being left out by scoring a sensational winning point just seconds from the end to book a place in the decider.

Not for the first time this year, champions Kilkenny mixed the good with the bad and had been second best for most of proceedings but Mary O’Connell’s 44th-minute goal after Miriam Walsh’s excellent assist having gathered Claire Phelan’s delivery breathed life into Brian Dowling’s outfit.

They had their best period thereafter, hitting four of the next five points to move two clear. Denise Gaule, who was hampered by a finger injury in the closing stages, landed three frees and Katie Power a stunning score and it looked for all the world that we were in for a third consecutive Kilkenny-Galway decider.

But that was to reckon without the character of this youthful Cork side. Though it was the experienced Ashling Thompson, Pamela Mackey and Hannah Looney that drove them on in that definite period, Saoirse McCarthy was a revelation at half-back too and points from Orla Cronin from a free and Fiona Keating brought them level just before the end of regulation time.

Keating’s score came after Meighan Farrell came from nowhere to deny Katrina Mackey a goal, after Collins, who had come on in the 50th minute for 19-year-old Ciara O’Sullivan, put her in. 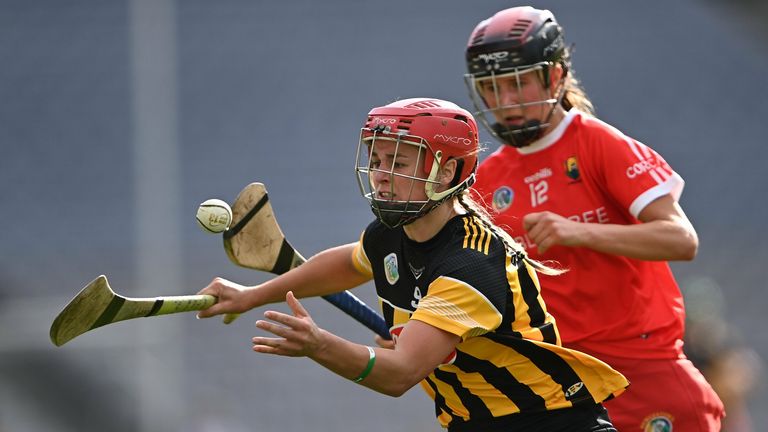 There was a sting in the tail though when Cronin was sent off in the wake of the equaliser, for a what seemed like a push into the faceguard of Grace Walsh.

Not even that could deny the Rebels roar however, and it was Collins who came up trumps in the most dramatic fashion.

It was ferocious industry that buttressed Cork’s efforts. Kilkenny sought to work it out from the back early on, Aoife Norris taking a number of short puckouts but the Leesiders did not allow them out easily, pressing up high to put pressure on immediately.

When it came to work-rate though, it was Chloe Sigerson who stood head and shoulders above all else on the pitch, with a truly phenomenal half-hour, covering so much ground but supplementing that with five points, four from play including a couple of huge scores from distance.

She was ably assisted by the athletic Looney in midfield, while Ashling Thompson was managing to nullify Gaule’s influence and the entire Cork defence, including the returning Pamela Mackey and Libby Coppinger, dominated their match-ups.

Meanwhile, Paudie Murray started with Katrina Mackey, Orla Cronin and Amy O’Connor in his full-forward line and they did well early on though Colette Dormer and Davina Tobin did get to grips with them later on.

They got off the mark early when McCarthy raided down the left from half-back but Amy Lee made a crucial intervention in the second minute, putting her body on the line to deny Aoife Doyle a goal from point-blank range.

Gaule levelled from a free but Cork worked the ball intelligently to create spaces and crucially, finished well for the most part.

Sigerson was the star turn but Katrina Mackey and Cronin also found the target and though Katie Power and Nolan, Kellyann Doyle and Gaule split the posts for Kilkenny, the champions went in at the change of ends trailing by 0-10 to 0-6.

The Cats couldn’t alter the mood initially after the restart, Cork playing with supreme confidence, and clearly revelling in the open spaces of Croke Park.

The goal changed that though and it looked for all the world that it would propel the Cats to another final but Cork had more in the tank and having fallen at the penultimate hurdle to Kilkenny last year, edged the verdict this time around.

Galway had to withstand a heroic effort by Tipperary but a fortuitous goal right on the hour by Orlaith McGrath finally gave them the breathing space to advance to the final on September 12.

They will be sweating on the availability of excellent corner-back Dervla Higgins, who was sent off by referee Ray Kelly three minutes before that following the intervention of his umpires but manager Cathal Murray indicated afterwards that they will be pursuing a case of mistaken identity to ensure her availability for the decider.

Tipperary would have placed a lot of emphasis on being in the game at the end of the first quarter and it seemed like Galway were chasing an early goal to fan the flames of any doubt that might have existed in the Premier women.

Siobhán and Orlaith McGrath looked to take on their markers at every opportunity but the Tipp defence held firm, though Ailish O’Reilly fizzed a ground shot narrowly wide from a tight angle and Siobhán McGrath had another first-time effort blocked by Julieanne Bourke.

The Munster outfit were competitive for much of the opening quarter and actually led by a point after seven minutes, by which stage Orla O’Dwyer had swung over a delightful equaliser to Aoife Donohue’s opener and Cáit Devane had converted a free.

But as the half wore on, it became clear that they were just not as sharp in the really tight exchanges as their opponents and were finding it difficult to get beyond the Galway 45.

When they did, it was through aimless long balls rather than the diagonal deliveries and pop passes to supporting runners that had yielded such tremendous dividends in their narrow League semi-final defeat to Kilkenny last June. 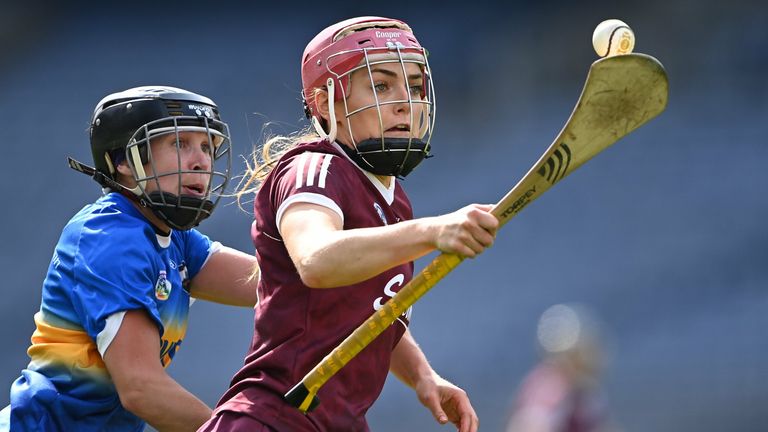 There was no shortage of workrate – it was monumental – but the Galway rearguard dealt comfortably with anything coming their way and had more threatening shots to fire.

After Orlaith McGrath equalised, finished with three points in a matter of minutes from an O’Reilly 45, Niamh Kilkenny, following a trademark gliding run with an equally typical finish and Donohue to make it 0-5 to 0-2 at the water break.

It was 0-8 to 0-4 at the change of ends and that was a fair reflection of a half that never really took off, though Kilkenny’s second score after deadening a difficult ball brilliantly and then moving effortlessly to her right before finishing from 50m was a real highlight.

Devane, who had missed a few difficult placed-ball opportunities drilled over a free from the middle of the field just before the break though and Tipperary were still alive.

Four minutes and 20 seconds after the restart, they were on the front foot, Devane having driven over three points in the blink of an eye, two frees either side of a snap shot after O’Dwyer had forced a turnover.

There was a clear change in mindset and approach in possession, with more thought in the delivery and it almost yielded a goal, Higgins getting away with a nudge in the back on Clodagh McIntyre.

It was never free-flowing but Tipperary’s belief was growing visibly and they were the better team in the second half, with Mary Ryan and Bourke leading from the back, the touch now sure and Galway the ones looking a little shaky.

It took Cathal Murray’s side 15 minutes to add to their interval tally, via Orlaith McGrath and they Donohue moved them three clear but substitute Miriam Campion snaffled a quick point in replay

The blue and gold contingent will regret getting no return from three further goal opportunities all involving the lightning quick McIntyre, who had a shot saved by Sarah Healy after a blinding run and then failing to find Devane from a good position. She also had a shot blocked in amazing fashion by Sarah Dervan.

Galway had their opportunities too, Caoimhe Bourke doing brilliantly twice to deny Siobhán McGrath and then force the Sarsfields attacker to pop over from close range.

Unfortunately for the ‘keeper though, she allowed a shot for a point from Orlaith McGrath to drop from her hand into the net in a horrible repeat of Áine Slattery’s mistake that cost Tipp in the aforementioned League semi-final, and that ended the hopes of Bill Mullaney’s game crew, though they kept driving forward to notch up points from Grace O’Brien and Devane.

Their dream of a first final in 15 years, when the remarkable Ryan came on as a sub, was dead and it was Galway instead progressing to their third in a row.