Eight hours before Cam Smith walked onto the course at St Andrews to hunt down Rory McIlroy and claim a historic and thrilling Open title, the son of an Australian great stood on the green at the 18th hole.

Andrew Thomson, son of five-time Open winner Peter, who passed away four years ago, was fulfilling a promise to his parents. He was there to scatter his father’s ashes.

Three teaspoons, give or take, sprinkled from what looked like an old spice jar, with permission from the R&A and tournament organisers, in the top right corner, where the green meets a small section of rough, then hits the back fence.

It was a fresh, clear morning on the hallowed Scottish course, only half an hour before the first groups teed off on the final day’s play. Cameron Smith, the best-placed Australian, was four shots behind McIlroy and Viktor Hovland in third place. 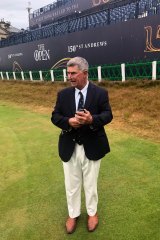 Andrew Thomson on the 18th hole at St Andrews, the morning of Cameron Smith’s victory in the Open.

Thomson muttered a few words in the quiet, two friends watching on and Thomson’s mother Mary dialled in on FaceTime. Afterwards they retired to the clubhouse for a traditional St Andrews breakfast of square sausage and egg and a cup of strong, black tea, to take in the day’s play.

Call it coincidence, providence, the magic of sport and life. Over the next four hours, Thomson watched on, agog, as Smith stalked, caught and passed McIlroy and Hovland, shooting the lowest ever final round by a winner of The Open to take the title in a record-breaking tournament score of 20-under.

“I was sitting there, stunned,” Thomson told the Herald and The Age from Scotland. “I couldn’t believe what had happened. Smith played perfect golf, all credit to him. But what a coincidence that the ashes of a former, five-time champion, also an Australian, had been sprinkled there that morning.

“Smith’s win was a very rare event, to see someone as competent and confident as Rory McIlroy overtaken. McIlroy didn’t collapse, he was just surpassed.”

St Andrew’s was the fourth and penultimate stop on Peter Thomson’s posthumous world tour, the late Australian great winding down just as a new one, in Smith, looks like revving up.

Thanks to his son’s dedication, small quantities of Thomson’s ashes are settling into putting greens at Birkdale, Liverpool and Lytham and St Anne’s, the other courses on which Thomson stamped his authority over the famous British tournament. Andrew Thomson even played with his father’s clubs at Royal Lytham in a moment of connection between the generations.

With the majority of Thomson’s ashes interred in Melbourne, there is a teaspoon or so left over in the jar, a last piece of his father Thomson has saved for himself and his mother to disperse at Royal Park in Melbourne.

“It’s a public course. That’s where Dad grew up and taught himself to play,” Thomson said.

It was a singular pleasure, he said, to watch an Australian “come from nowhere”, relatively speaking, and blitz the field. It reminded him of the 1960 Open, when American Arnold Palmer was favourite but Kel Nagle, a “quiet guy from Pymble, absolutely slaughtered him”.

Thomson said his father used to confound admirers when he ranked that tournament his favourite.

“They’d say ‘but you didn’t win that year, how can that be your favourite?’ and he’d say ‘because my best mate won’,” Thomson said. 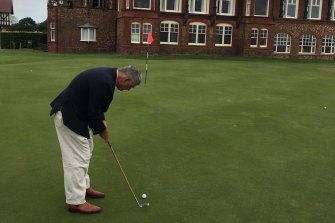 Andrew Thomson putts with his father’s putter at Royal Lytham.

“Dad was there in 1960, he knew he couldn’t win that year – he wasn’t playing very well – but he thought Kel could. He took Kel around the course in practice rounds, Kel had never played it before, and he told Kel everything he could about it, where to hit and where not to hit. And Kel just crucified Arnold.

“You wouldn’t say Cam Smith was unheralded or unknown, he had been playing so well this year and was full of possibility. But McIlroy had run away with it there and looked unstoppable until it happened.”

Thomson thought his late father would be tickled at the sight of Smith’s Sunday afternoon exploits, particularly a blistering back nine that had commentators, spectators and competitors searching for superlatives.

“If he’d been sitting there, he’d say ‘This is 1960 all over again, Australia trounces the favourite, thank you very much’,” Thomson said.

Part of him, at least, was there. Peter Thomson returned to the Old Course, as his wife had promised, and to a patch on which he and five other Australians, now, have made their mark.

Sports news, results and expert commentary. Sign up for our Sport newsletter.