Home » Sport » At the French Open, Novak Djokovic Is Aiming to Rewind to 2016

At the French Open, Novak Djokovic Is Aiming to Rewind to 2016

PARIS — There is no way to revisit the cramped French Open interview room where Novak Djokovic sat with a vacant look in his eyes last year after being upset by the unseeded Marco Cecchinato in the quarterfinals.

The Philippe Chatrier Stadium has been demolished, nearly reconstructed and expanded in the last year. Though it is impossible to find the precise space where Djokovic conducted that memorably tense and terse news conference, it appears that the general area where he looked miserable is now an unfinished luxury suite filled with plastic piping, bare concrete and exposed metal beams.

There is literally no going back, and Djokovic certainly would not want to relive that shocking defeat, which he has told friends was one of the worst of his career and came just before he had righted his listing game.

But as he finds himself back in the French Open quarterfinals, where he will face Alexander Zverev on Wednesday, Djokovic is deeply interested in reliving another experience at Roland Garros.

That would be his 2016 victory in Paris, which allowed him to simultaneously hold all four Grand Slam singles titles.

It was remarkable enough the first time — no man had done it since Rod Laver in 1969 — and Djokovic is just three victories in Paris away from pulling off that sweep again. It’s not technically a Grand Slam, which requires winning all four in the same calendar year, but it remains an exceptional achievement.

“I don’t think people fully appreciated it in a way the first time,” said Brad Stine, a longtime coach now working with Kevin Anderson. “But it was phenomenal once, and it would be ridiculous a second time, considering the level of tennis these guys compete at on a day-to-day level.”

Djokovic, like Roger Federer, has yet to drop a set in this tournament, and he needed just one hour and 33 minutes to dispose of Germany’s Jan-Lennard Struff, 6-3, 6-2, 6-2, in the fourth round on Monday.

Next up: the fifth-seeded Zverev, a more dangerous German who looked ready at the end of last season to start stealing lots of thunder from the Big Three: Djokovic, Federer and Rafael Nadal. But Zverev has had to deal with private storms instead — personal issues and financial disputes with his former manager that have affected his focus and his game.

The lean 22-year-old is still not at his sharpest, missing too many big openings and often roaming too far behind the baseline. But his hunger was palpable on Monday against Fabio Fognini, the Italian shotmaker who beat Zverev in straight sets in April on his way to winning the clay-court Monte Carlo Open for the first time at age 31. 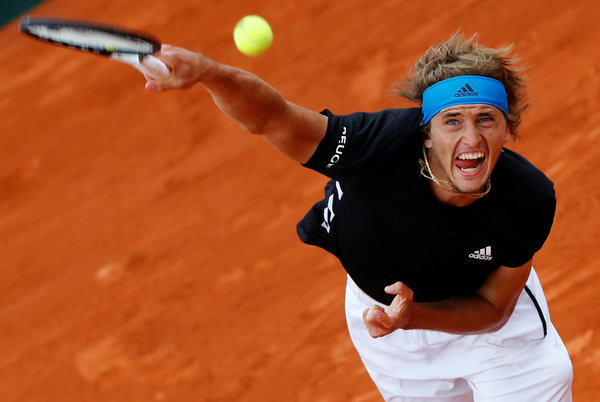 Zverev scrapped, hustled, fired huge serves and came out the winner this time, 3-6, 6-2, 6-2, 7-6 (5). Fognini in rare form would have eliminated Zverev again with his compact strokes, tight-to-the-baseline tactics and deft touch. He still generated plenty of quick-strike brilliance, but he also bounced rackets, jawed with members of Zverev’s team and failed to find inspiration and the lines when he needed them most.

Now Zverev gets the dubious honor of facing Djokovic on a mission, although he has twice beaten Djokovic.

“Everything is coming together beautifully,” the top-seeded Djokovic said. “I’m motivated to fight for the trophy. I mean, that’s why I’m here, but it’s still a long way to go.”

The other quarterfinal in the top half of the draw will match the No. 4 seed Dominic Thiem against No. 10 Karen Khachanov, the heavy-hitting Russian who has emerged from an early-season slump and defeated No. 8 seed Juan Martín del Potro, 7-5, 6-3, 3-6, 6-3, on Monday.

Thiem, the French Open runner-up last year, rumbled past Gaël Monfils, the last French singles player in contention, 6-4, 6-4, 6-2. Though the acrobatic Monfils usually produces the best highlight-reel material, it was Thiem who conjured the strike of the day: a between-the-legs, passing-shot winner at full stretch.

Thiem could be a particularly significant test for Djokovic if they both reach the semifinals. Zverev, based on current form, is a rightful underdog. He insists he has enjoyed being out of the spotlight with the focus on Stefanos Tsitsipas, the emerging 20-year-old from Greece who lost to Djokovic in the Madrid Open final and fell in a five-set, five-hour-and-nine-minute epic against Stan Wawrinka in the fourth round here.

“The best thing that could have happened for me is how good Tsitsipas’s clay-court season was,” Zverev said. “He was kind of the new superstar all of a sudden, and for me it was kind of a nice thing that not all of the attention of the kind of NextGen thing is only going towards my way.”

Khachanov, 23, is a new-wave player, too, although he has more in common with his elders in that he and his wife, Veronika, are expecting their first child.

Djokovic, 32 and the father of two young children with his wife, Jelena, has learned plenty about work-life balance through the years. After his loss to Cecchinato here, he emerged from a two-year slump to win Wimbledon and then return to No. 1. This season, after overwhelming Nadal in the Australian Open final, he lost early in several tournaments before recovering his mojo to win in Madrid.

Serving as president of the ATP Player Council has been a drain this year, with the contentious decision not to renew the contract of Chris Kermode, the ATP Tour chief executive, and the tumultuous resignation of the ATP board member Justin Gimelstob after an assault conviction. Djokovic and Gimelstob were working closely together in an attempt to increase player influence.

Djokovic’s advisers were convinced he needed to take a step back to find his top gear on court. Janko Tipsarevic, his friend and fellow Serbian player, told me in a recent interview that the waves generated by Kermode’s ouster, which could still be revisited, had been particularly destabilizing.

“Novak is used to investing a tremendous amount of time in what he’s doing and getting results on the tennis court,” Tipsarevic said. “You and me, we both know that politics is not like this, and when things don’t go his way and the media portrays him as a villain, this deeply affects him.”

Djokovic has looked far from distracted in Paris.

“His form is absolutely fantastic here,” said Mark Petchey, the British coach and analyst. “He’s serving harder on average than when he won in 2016, by 11 kilometers per hour, and with greater accuracy, which has accounted for having almost 20 percent more returns unreturned. When you add in the standard of his own returns, that’s an almost unstoppable force, definitely Rafa’s equal.”

Djokovic and Nadal, the 11-time French Open champion, can face each other only in the final this year, and it is time to find out if Federer, Thiem or anyone else can spoil that most likely scenario.