Home » Sport » Before Balls and Strikes, Umpires Make a Call to Pray

Before Balls and Strikes, Umpires Make a Call to Pray 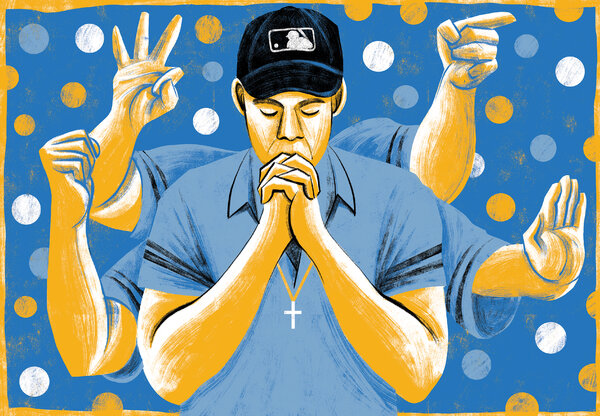 CHICAGO — The umpires dialed in at about 3 p.m. on a Friday, calling from places like St. Louis and Oakland, Seattle and Cleveland.

It was time to pray.

“God is our father,” Ted Barrett, a major league umpire for over two decades and an ordained Southern Baptist minister, told the men. “He loves to hear from us, and so don’t ever feel like he’s too big or too busy to bring your little problem to him.”

The umpires on the line had endured all manner of turmoil: anger or family troubles, addiction or overwhelming grief, loneliness and the agony of imperfection. Those last two, Barrett knew, were among their vocation’s most familiar menaces, ones that might surface during games that very night or in the hours afterward.

So for about a dozen big league baseball seasons, small groups of umpires have privately convened every week by phone to pray together, searching for the kind of communal solace that is hard to come by when life is spent on the road and under the strain of officiating the national pastime.

“Knowing that there’s a group of guys that get on the call and are all going through the same journey and understand what it’s like to be on this journey and to pray with them, it gives a sense of community,” said David Rackley, who was the left-field umpire for this season’s All-Star Game.

Baseball has sometimes been a showcase for the Christian faithful. Orel Hershiser sang a hymn on the mound during the 1988 World Series (and later on “The Tonight Show”). One of his successors for the Dodgers, pitcher Clayton Kershaw, wrote a book with his wife, Ellen, about faith. In 2018, a professor at Eastern Illinois University found that 8 percent of M.L.B. players included at least one Bible verse in their biographies on Twitter, a higher share than the athletes in the N.B.A., the N.F.L. and the N.H.L. 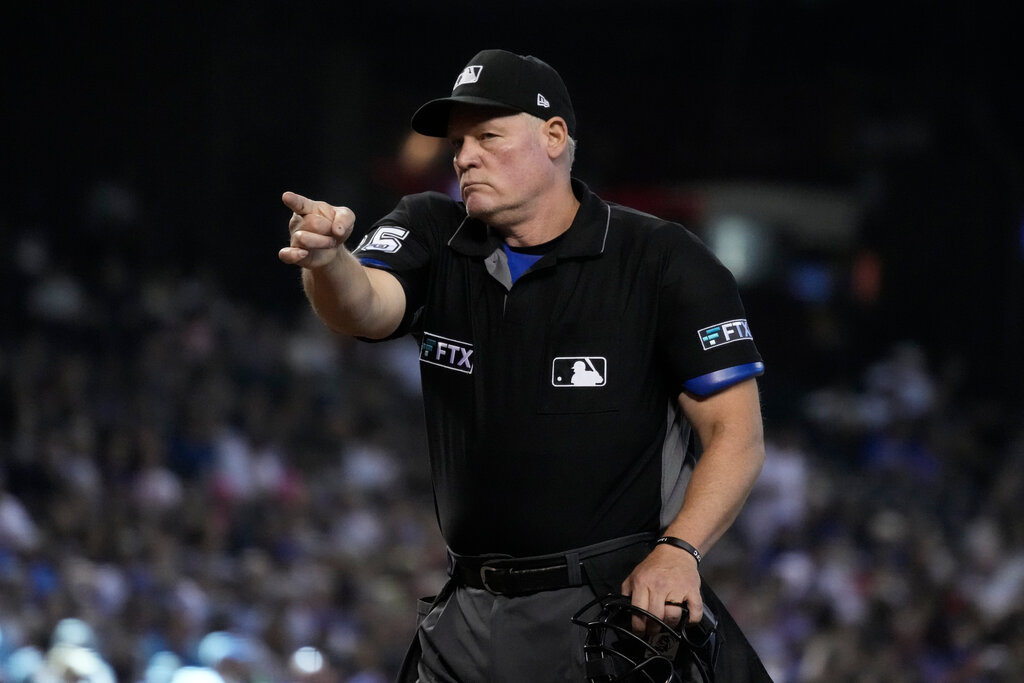 ‘Jesus would have been a great umpire because he wasn’t a milquetoast where he would have allowed himself to get run over.’

Ted Barrett, a major league umpire for over two decades and an ordained Southern Baptist minister.

A group called Baseball Chapel has long sent chaplains to ballparks on Sundays to lead services for thousands of people across the sport, a practice that has sometimes led to criticism. And, borrowing a marketing strategy from the minor leagues, some M.L.B. franchises have hosted faith nights and postgame Christian concerts over the years.

But on a day-to-day basis, umpires are among baseball’s most isolated figures. Increasingly removed from an era in which umpires were often men with hard-charging lives, some of them haunted by war, the full-time umpiring staff of today includes just 76 men who travel the country in crews of four and keep a distance from the players and managers they govern. Their lives can feel like blurs of airports and fastballs and hotels and brightly lit ballparks, punctuated by calls home to their children and hollers from the dugouts.

Their spiritual traditions can serve as anchors, with the lessons and lives they find in Scripture showing them a way forward on the field and away from it.

“Jesus would have been a great umpire because he wasn’t a milquetoast where he would have allowed himself to get run over,” Barrett, who has been the officiant at some umpires’ funerals, said in an interview in Chicago. “You see him standing up to the Pharisees. He would have been able to give it right back on the field.”

He paused and smiled.

“Of course, he would have been perfect.”

Other umpires made similar observations, followed by acknowledgements that tending to their faith is a logistical challenge in a profession that might have them traveling from San Diego to Houston to Chicago in a week’s time. Though the umpires sometimes compare notes on which churches are eager to host visitors and also offer a benediction early enough to make a Sunday afternoon game, attending a single house of worship regularly during the season is out of the question. 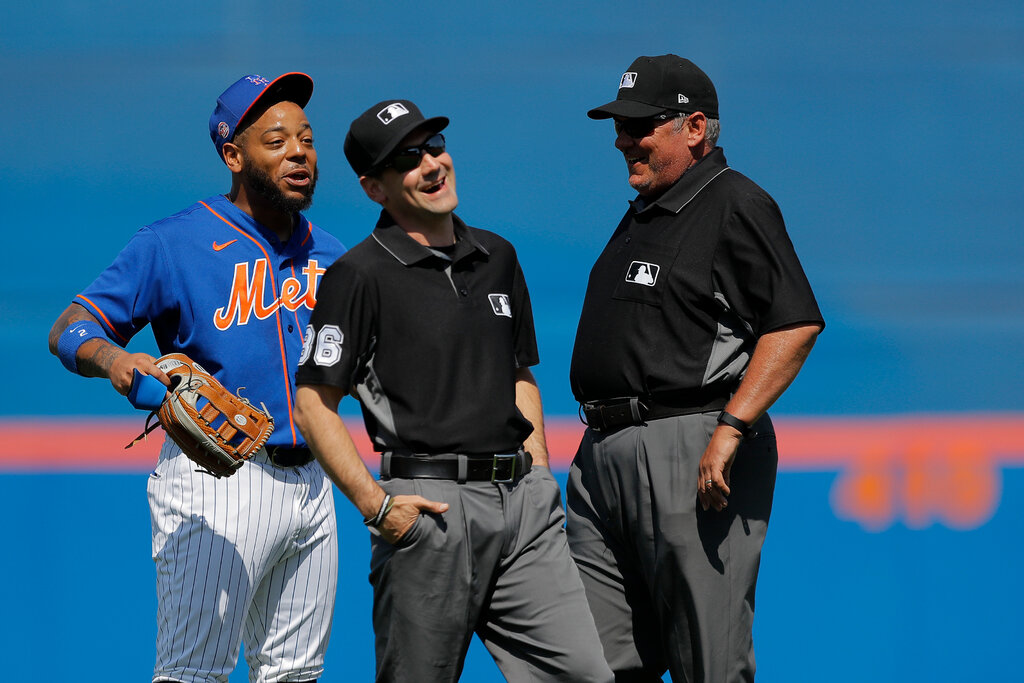 ‘We tend to hide in our caves, and being alone is not a good thing in this world.’

The Friday prayer call, which the umpires can now be reminded of via automated text messages 15 minutes in advance, is not quite a substitute. But, the umpires said, it offers a stable dose of spiritual sustenance, whether they are at a baggage claim in Seattle, in a rental car in Texas or, recently for Rackley, a P.F. Chang’s restaurant in California.

“In Georgia, you grew up in church, more or less,” said Marvin Hudson, a member of the crew for last season’s World Series. “I just wanted to be a part of that and make sure I was staying where I needed to be and see how other guys were reacting, too.”

The idea, Rackley said, is for the umpires to feel a little less solitary.

The weekly calls for the umpires — officials in other professional leagues have sought advice on how to start their own — generally have the same format. An umpire welcomes his colleagues. Some of them identify themselves; others stay silent, their lines muted. A brief message, often tailored to the rigors of being an umpire, follows. Then comes a solicitation for prayer requests and, at last, intercession.

The men are usually finished in about 30 minutes. But one after another said the effects of the call carry over. Some umpires have worked through a book called “Multiply: Disciples Making Disciples,” while others have regular Bible studies.

In the off-season, many of the umpires participate in a three-night retreat north of Dallas. Spring training brings fellowships over Scripture at a Cracker Barrel in Arizona.

In the regular season, many umpires pray with members of their crew before first pitch, and some say they find themselves talking to God between pitches or innings. When he delivered the message during one call this season, Barrett said, he urged umpires who were working games that night to gaze skyward at some point and marvel at what he saw as the handiwork of God. 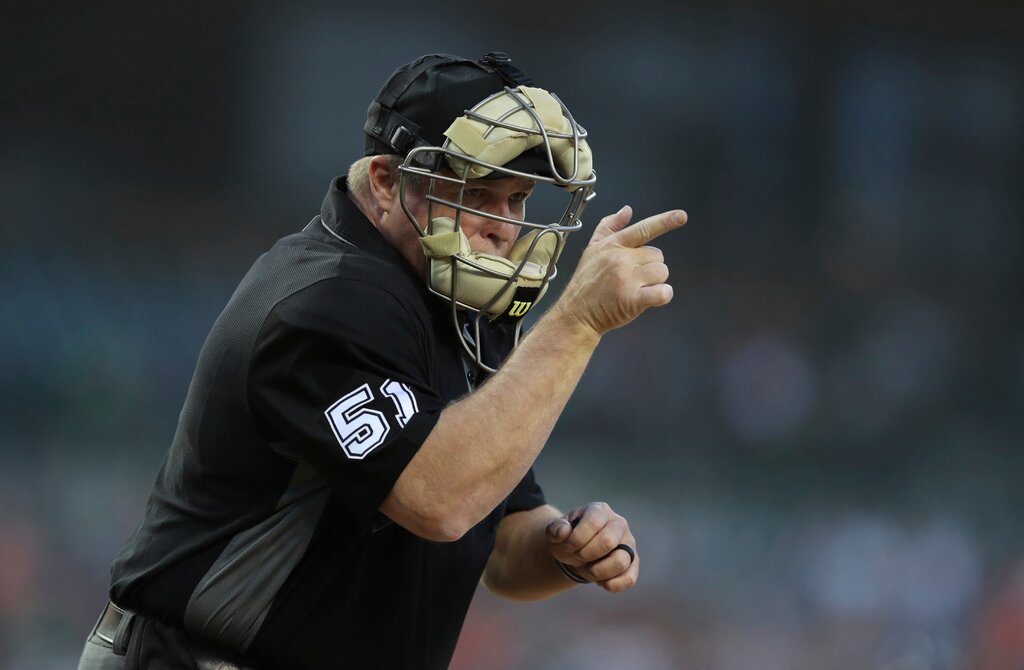 ‘In Georgia, you grew up in church, more or less. I just wanted to be a part of that and make sure I was staying where I needed to be.’

Marvin Hudson, a member of the crew for last season’s World Series.

“To stand out there in front of 50,000 people and call balls and strikes as you’re getting picked apart on TV, to me, it’s impossible to do this job well, so I rely on God to do it for me,” Barrett said, offering an umpire’s version of a common refrain among Christians. “We talk about this a lot on our crew: Prepare the best you can, and then go out and do the best you can, and let God take care of the rest.”

With pressure during games ever-present, umpires said they often thought back to their spiritual training, particularly when one of their calls was under siege. Perhaps, they said, they might prove more able to hold their own anger in check. Crude language that they might have deployed during arguments years ago might now just rattle around their minds instead. And when a call is blown and a stadium is roaring — though Barrett laughingly acknowledged that he sometimes thinks, “Lord, forgive them for they know not what they do because we got this right” — they find reassurance in the teaching that Christ himself was often unpopular.

“He was criticized for what he did,” said Hudson, who noted that players and umpires sometimes “chitchat” about faith while they’re on the field. “We get criticized for what we do — not that every decision we make is right like his — but I find comfort in that.”

The weekly gathering has been a fixture on his calendar.

Barrett, 56, knows the end of his career is drawing closer, and he has begun to think about what the calls might look like once he steps back from the game. Younger umpires like Rackley, 39, said they were trying to take on greater responsibility for a ritual they regard as nothing short of a sacred ministry.

It is that way, the umpires said, because of the comfort the men and their faith offer one another, especially when the long season feels ceaseless.

“As you walk on the field tonight, know that the Holy Spirit gives you power,” Barrett said one Friday. “Love you guys. Jesus loves umpires.”