Behind the scenes in Liverpool dressing room after Champions League

‘Allez Allez Allez’ belted out in the dressing room, champagne flying everywhere while Jurgen Klopp SINGS in a TV interview: Behind the scenes as Liverpool celebrate their sixth Champions League victory

The party has started for Liverpool and their supporters after they secured their sixth Champions League title in Madrid.

Goals from Mohamed Salah and Divock Origi were enough to see off the threat of Premier League rivals Tottenham, leading to jubilant scenes at full-time.

There was palpable relief on the face of Jurgen Klopp, who has finally won his first trophy with the Reds, while for the squad as a whole there was a sense of redemption following their defeat in last year’s final by Real Madrid. 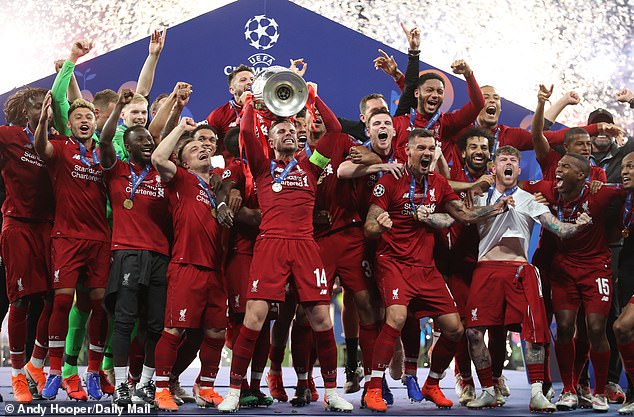 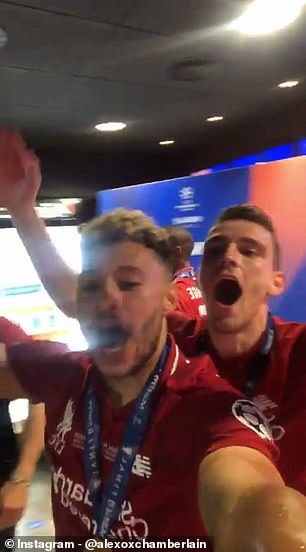 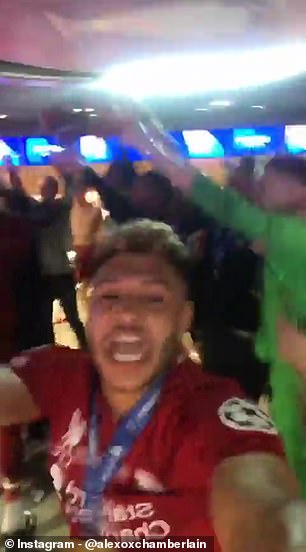 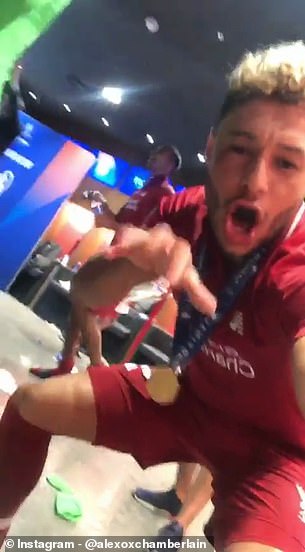 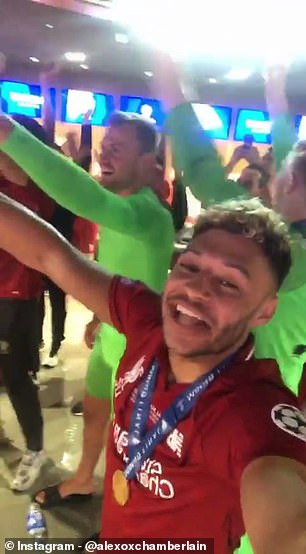 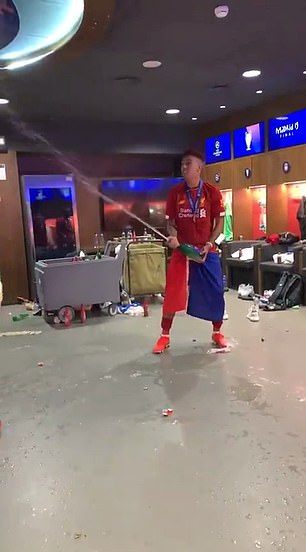 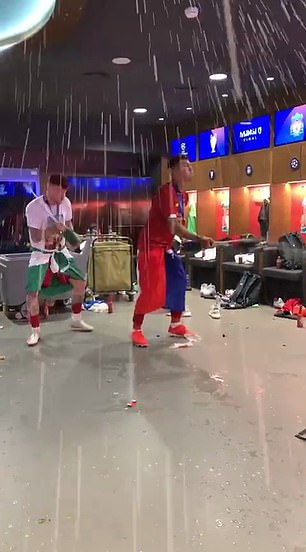 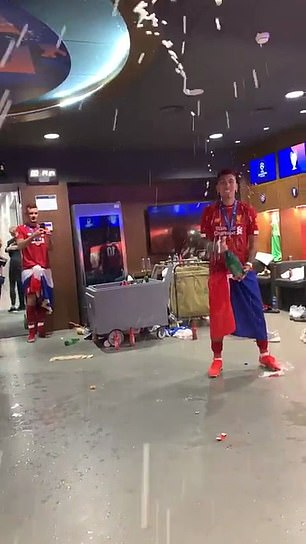 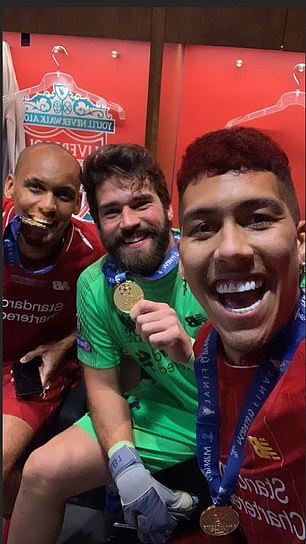 And all of that emotion poured out after the whistle and carried on off the field too as the Liverpool squad partied in their dressing room at the Wanda Metropolitano.

After serenading the travelling support with renditions of ‘You’ll Never Walk Alone’ on the field, midfielder Alex Oxlade-Chamberlain captured the celebratory scenes on Instagram off it.

The Liverpool squad and staff raucously sang another well-loved anthem from the Anfield terraces, ‘Allez Allez Allez’, with the Champions League trophy raised triumphantly in the background.

Oxlade-Chamberlain, who was an unused substitute in the final, was joined by Andy Robertson on camera before panning round to reveal medals and drinks flying as the anthem reached its crescendo.

The song was then followed up by the serenading of instrumental defender Virgil van Dijk, who has his own chant to the tune of The Dubliner’s ‘It’s a Dirty Old Town’. 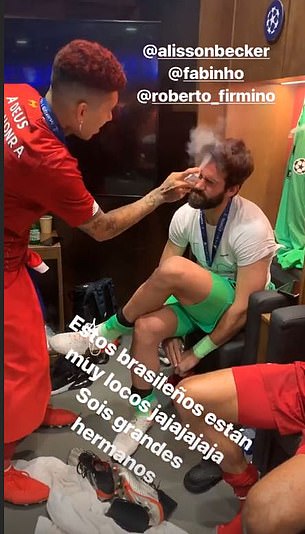 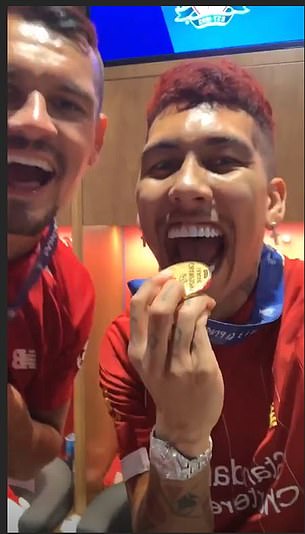 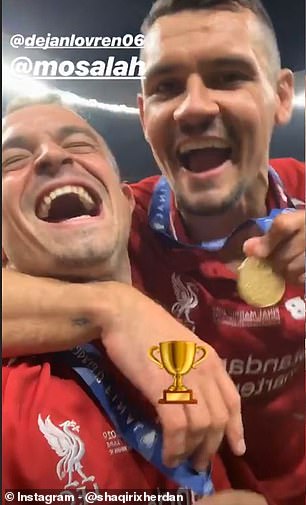 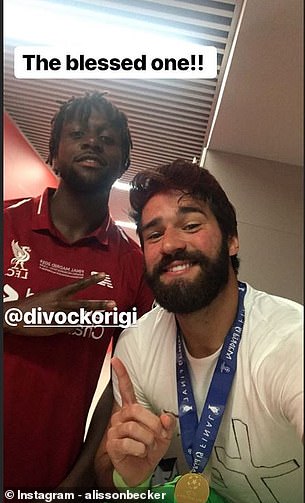 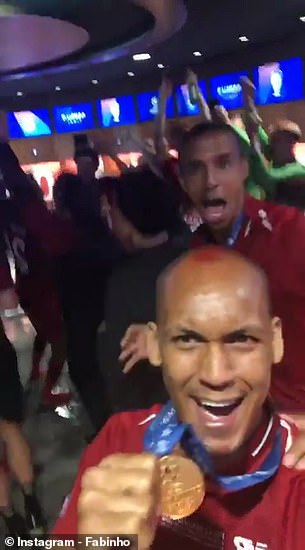 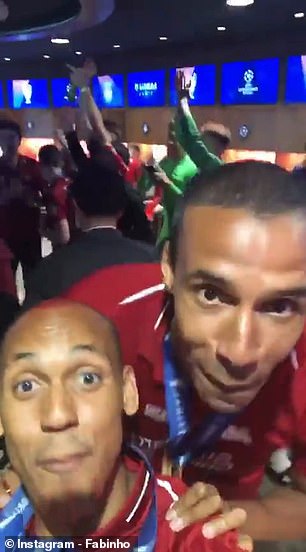 Van Dijk has been a revelation for Liverpool since signing in January 2018, adding a defensive nous that has helped the Reds launch an impressive title challenge before going on to secure European glory on Saturday.

The former Celtic and Southampton defender reveled in the adulation, orchestrating the squad as they sang his name.

As well as the Anfield anthems there was time for renditions of ‘Campiones’, as captured by midfielder Fabinho who found himself drenched in champagne as Firmino and Co lathered their team-mates while the squad danced around the famous trophy.

Old ‘big ears’ was kept in safe hands by goalkeeper Alisson, who paraded the trophy through the mixed zone in front of the waiting media pack, adding that he couldn’t stop to talk as he had to protect the trophy.

The Brazilian goalkeeper face-timed his pregnant wife back home from the pitch, before declaring his love for the Champions League’s iconic trophy. 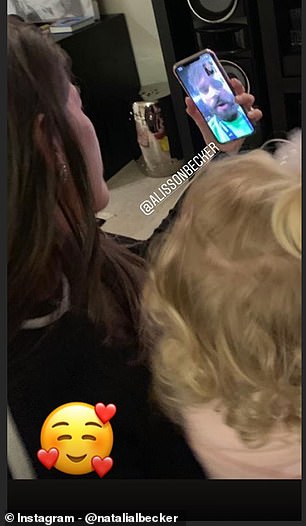 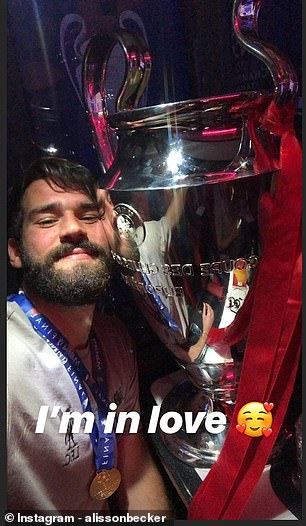 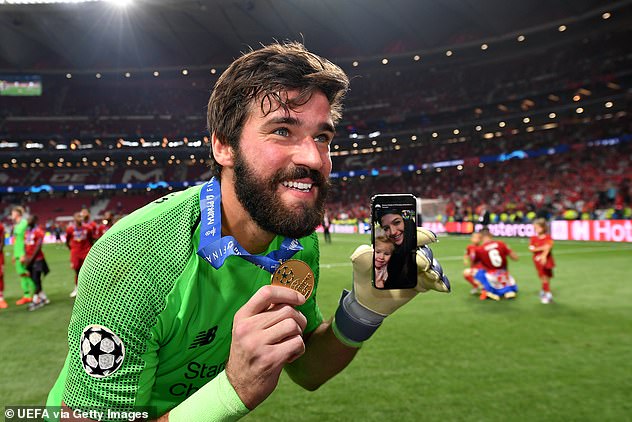 Alisson’s hair had a tinge of red after Firmino coloured it with hairspray, something embraced by most of the squad including Mohamed Salah and even the hairless Fabinho.

The party carried on after the dressing rooms too as the squad belted out ‘Allez Allez Allez’ once again on the team bus.

Jurgen Klopp meanwhile rattled through a series of post-match interviews but couldn’t resist bursting into song himself.

Speaking to Norwegian television, Klopp responded to comments about his inability to win in cup finals by altering the words to the Salt-N-Pepa classic ‘Let’s talk about sex baby’. 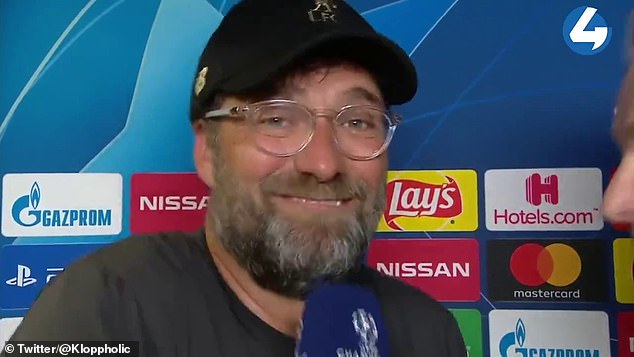 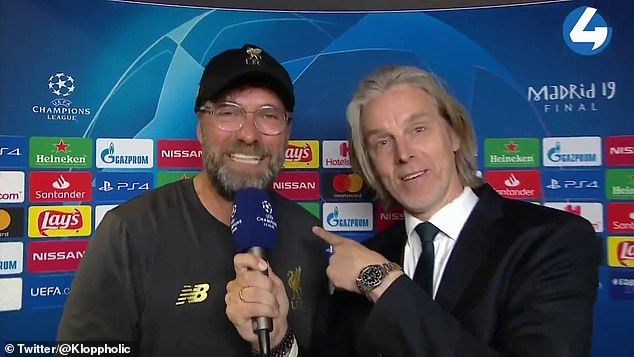 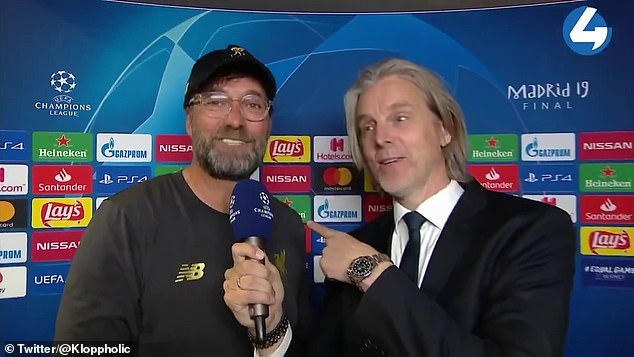 While the final itself did not have the drama of the semi-finals, it will remain a night that will live long in the memory for Liverpool fans after they brushed past Tottenham.

The match took a huge turn just 21 seconds into the game when referee Damir Skomina pointed to the penalty spot for a handball against Tottenham’s Moussa Sissoko.

After a long wait, Salah stepped up to give Klopp’s side the lead and set them on course on for victory.

Tottenham rallied after half-time but their hopes were dashed when substitute Divock Origi, who has a knack for scoring crucial goals, fired a left-footed shot into the net with just three minutes left to play. 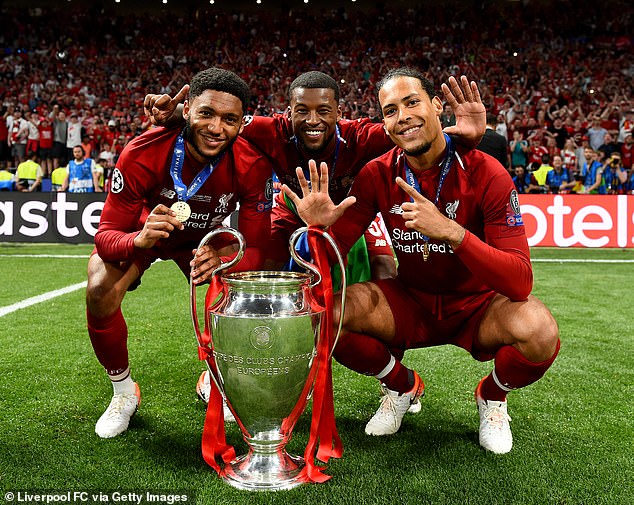 After being cruelly denied Premier League success thanks to the brilliance of Manchester City, European glory felt justified for a side that have excelled in all respects this season.

For Trent Alexander-Arnold, it was difficult to put the magnitude of his side’s achievement into words.

Speaking to BT Sport at full-time, he said: ‘It’s hard to even put into words what’s just happened. The celebrations that are gonna happen tonight.

‘The season we’ve had we’ve deserved it more than any other team. An early goal and a late goal has finished them off.

‘We’ve probably been dominated through the main part of the game but we’ve shown we’re a world class side and can win anyway.’