Ben Keating Goes From Selling Cars to Racing Them

Ben Keating’s unlikely journey to driving in the 24 Hours of Le Mans began nearly 14 years ago because, as he says now, “I’m difficult to buy Christmas presents for.”

Keating was a third-generation automobile dealer in South Texas, so his wife, Kathleen, thought it might be fun to buy him a track day at Texas World Speedway in College Station, where clients, many of them business people, learn about racing and get to drive fast.

He redeemed his $250 Christmas gift in 2006. He knew virtually nothing about racing. He wore shorts and tennis shoes, and he did not take a helmet (but found one before racing) or tools, borrowing a Dodge Viper from his showroom. But he enjoyed the weekend enough to know he wanted more. And by 2007, he was racing for real.

Keating, now 47, would win five national championships racing a Viper. He joined the Nascar Rolex Grand-Am Sports Car Series in 2011, the American Le Mans Series in 2013 and won his first two national-level sports-car races in 2013. By 2015, he was driving at Le Mans, and by 2017 he had his own team there.

“I thought I had nailed that gift,” Kathleen Keating said. “I had no idea that it would be the passion it has become. He has always loved speed, always has pushed the envelope in whatever he does.”

His team, Keating Motorsport, is returning to the race this weekend, competing in a Ford GT in the LM GTE-Am class. The Am is short for amateur; the drivers are commonly called “gentleman drivers.”

Keating is the lowest-rated driver among his three-driver team, and as a result he plans to drive for only slightly more than five of the 24 hours, the minimum required. The team finished third in its class in 2018, but was 28th overall in the field of 60. His car completed 334 laps, 54 behind the winners.

“You spend almost as much time looking out the back window as the front window,” Keating said of driving on the same track with much faster cars.

Keating, who lives in Victoria, Tex., and owns 19 dealerships, made it clear several times in a recent interview that racing is an extremely expensive sport and that he had some breaks along the way, as a car dealer and a racer. He said he learned by trial and error how to race wheel-to-wheel.

But he’s back at Le Mans. He will be joined again by Jeroen Bleekemolen, 37, of the Netherlands, and for the first time by Felipe Fraga, 23, of Brazil. This is the team’s first year in a Ford GT.

Racing a Ford will carry special significance for Keating. He grew up in Tomball, Tex., a city of about 11,000 north of Houston where his grandfather and father were Ford dealers. Ben Keating said he began working for his father at age 11.

Keating graduated from Texas A&M with an engineering degree, “because I wanted nothing to do with the car business.” He said he ended up working for his dad anyway. Keating eventually opened his own Ford dealership.

He also had a Chrysler dealership and sold Vipers. He started racing them, driving in the Rolex Sports Car Series, which included the 24 Hours of Daytona, an endurance event similar to Le Mans. 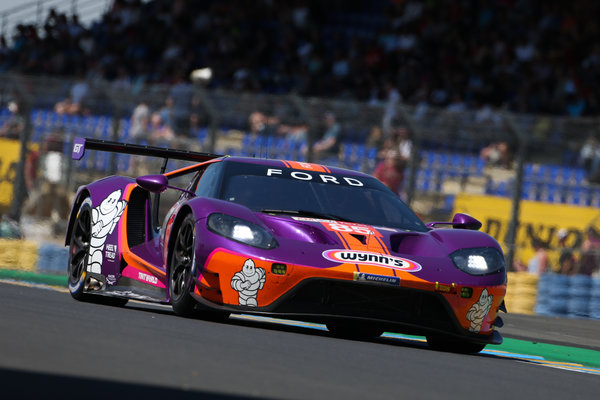 Because Ford is retiring its factory Le Mans program, the company, which will have four Ford GT’s in the top tier Le Mans Prototype, or LMP1, class, was also looking for a berth in the amateur class of privately owned cars.

“I’ve been racing on the same track with these guys for the last four years,” Keating said about the drivers at Le Mans. “They know I’m not an idiot.”

Scott Atherton, the president of the International Motor Sports Association, said it’s rare for a businessman like Keating to become a racer.

“There are many, many people who invest and participate in I.M.S.A. at the same level of time and effort, but not all of them develop the skill set that Ben has evolved into.”

Keating, whose team raced a Ferrari last year, reached an agreement in February to use a Ford GT in the amateur class at Le Mans. Chip Ganassi Racing will be using four of the Fords in the top-tier class.

“I have such deep roots with the Ford Motor Company,” Keating said. “I would say that is what makes me willing to spend the crazy amount of money to do this program. It is very hard to get into Le Mans. To be in any car is very special. To be in a Ford is incredible.”

He declined to say how much he spends on racing, but typically it costs well over $1 million a season to field an amateur team.

Keating knows that racing at Le Mans is unlike any endurance race in which he has driven, simply because it is Le Mans, where he said “the history, pomp and circumstances, and the energy of the event is on a totally different level.”

“They are capable of completely defying the laws of physics, as far as I’m concerned,” Keating said of the LMP1 cars.

His goal is to turn faster laps in the seven or eight stints over his more than five hours in the car than any similarly rated driver in the class. Bleekemolen is the team’s ace, but Keating does not want to do anything on the track to put Bleekemolen at a disadvantage.

The track at which Keating caught the racing bug is gone. Texas World Speedway closed in 2017, and the land was turned into the housing development Southern Pointe, described in advertisements as tranquil and family friendly.

It was not like that in the summer of 2006 when Ben Keating took his Viper there to try something he’d end up loving. He is grateful that his wife helped him turn the ignition key.

“I had the benefit of being able to grow my skill and grow my abilities to drive a racecar,” he said. “At the same time, I had the financial ability to be able to go out and afford to do that stuff.”