ARSENAL shot-stopper Aaron Ramsdale made a stunning save from a Leicester free-kick just before half-time to keep his side 2-0 up at the King Power Stadium.

Leicester midfielder James Maddison's superb free-kick from 20-yards was heading straight for the top corner, but was kept out by an incredible acrobatic save from Ramsdale. 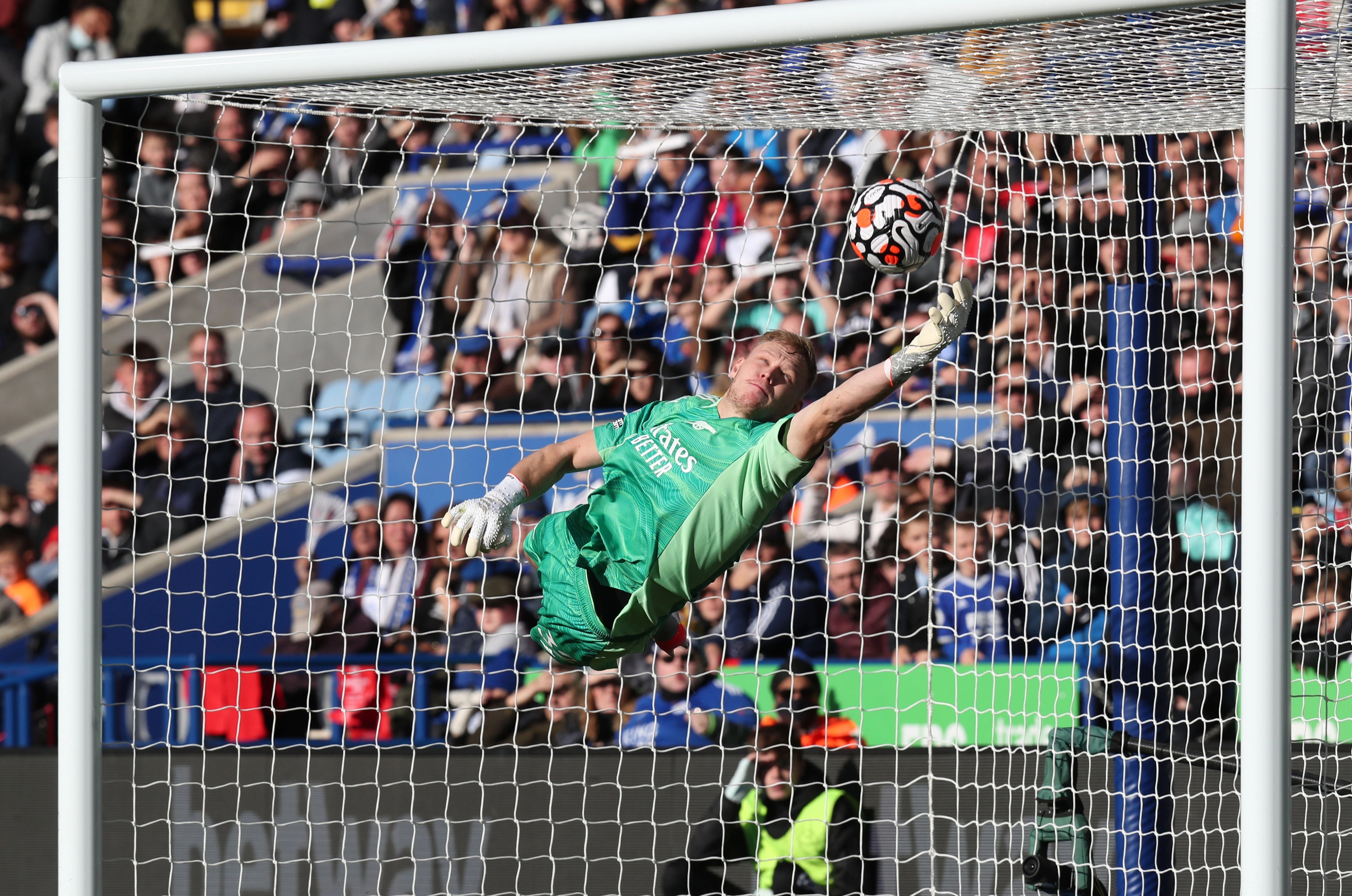 Ramsdale flung himself into the air to tip Maddison's effort onto the bar and then managed to recover to block the rebound from Jonny Evans.

Manchester United legend Peter Schmeichel praised Ramsdale's stop on Twitter, saying: "Best save I've seen for years by Ramsdale," despite his son Kasper playing in goal for the opposition.

Leicester fans behind the goal were already celebrating, but a spectacular double save by the young English keeper kept his side 2-0 up.

Arsenal had a dream start against Leicester this afternoon, scoring twice within 20 minutes with well-worked goals from Gabriel and Emile Smith-Rowe.

The Gunners totally dominated for the rest of the half and frustrated Leicester with their defensive 4-4-2 shape, despite the Foxes carving out some chances towards the end of the half.

Arsenal suffered their worst start to a league season for 67 years by losing their three opening game, including a 5-0 thrashing by Manchester City.

Arsenal boss Mikel Arteta then dropped first-choice keeper Bernd Leno and turned to their new £30m signing from Sheffield United and hasn't looked back since.

Ramsdale has started all seven of Arsenal's league matches since making his debut in a 1-0 win over Norwich last month, helping the Gunners go undefeated by conceding just four goals.

There were question marks over the £30m fee when he made the switch to North London, but his performances between the sticks for his new club so far have more than justified his price tag.

His outstanding save to keep out Maddison's free-kick was his best moment in an Arsenal shirt so far, earning his fourth clean sheet in his last seven for the Gunners.

Ramsdale started all 38 of Sheffield United's league games last season as they were relegated to the Championship, but nevertheless caught the eye of England boss Gareth Southgate.

The 23-year-old was selected for England's 33-man provisional squad for Euro 2020 in May, before going on to replace Dean Henderson in the final squad, but is yet to make his debut for the national team.

Southgate will no doubt have had eyes on Ramsdale's stand-out performance against Leicester and it will surely only be a matter of time before the Arsenal keeper gets his first cap.