Twelve-time Major League Baseball all-star Manny Ramirez has come out of retirement – at the ripe old age of 48 – to sign a one-season deal with the Sydney Blue Sox.

One of the most powerful batters and most iconic players in MLB history, Ramirez led the Boston Red Sox to World Series titles in 2004 and 2007 but retired nine years ago after his second violation of the league's drug policy. 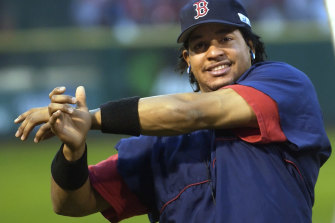 Despite his age, the Dominican-born superstar has attempted to mount a professional comeback numerous times in recent years and will now do it in the Harbour City with the Blue Sox as a player-coach.

"Manny has been interested in the Australian Baseball League for quite a while now. It was his preference to play down here in a big city and we’re thrilled to have a player of his calibre in Sydney."

Boston had not won the World Series in 86 years until Ramirez led them to that famous drought-breaking crown in 2004, and was named World Series MVP that year.

A fun-loving, jovial character off the field, he looms as a dream marquee signing for a sport that has always struggled to penetrate into mainstream audiences in Australia, ahead of what looms as a season like no other for the ABL.

In response to the COVID-19 pandemic, the ABL has split into two conferences – one based in New Zealand with Brisbane, Auckland, Adelaide, Geelong-Korea and a possible new international team, who will play seven-inning matches.

The other conference, featuring Sydney, is to be stationed in Australia and play by traditional baseball rules of nine innings.

The Blue Sox have not won the Claxton Shield, which was first awarded in 1934, since the latest iteration of the ABL was established 11 years ago.

END_OF_DOCUMENT_TOKEN_TO_BE_REPLACED

END_OF_DOCUMENT_TOKEN_TO_BE_REPLACED
Recent Posts
We and our partners use cookies on this site to improve our service, perform analytics, personalize advertising, measure advertising performance, and remember website preferences.Ok