Sometimes it is a primal skill that matters most in football.

“If you’re chasing a guy, can you catch him?” said Bill Belichick, the six-time Super Bowl champion coach of the New England Patriots. “Or if a guy is chasing you, can you outrun him?”

In the N.F.L., scouts, talent evaluators, coaches and general managers spend tens of thousands of hours every year in a quest to identify which players are best at these fundamental skills. Despite all the complexities and intricate strategy of a modern pro football season, some of most imperative evaluations still border on the rudimentary.

The consensus, however, is that it’s not simply a measure of how fast someone runs, even if the 40-yard dash metric is ubiquitous and venerated. Sophisticated technologies can now quantify a dozen variables of a sprinting stride and decoding the clues within that data is a budding cottage industry, but there may also be more of a schoolyard ethos to the assessment.

“It’s a little bit more in the heart than the stopwatch,” Belichick said last year on the topic, which is one of his favorites. “There’s competitive speed, or game speed.”

It is not a trivial consideration: Championships can be won and lost on such plays. In addition to the countless examples of a wide receiver pulling away from a defender to get open for a deep touchdown pass or a running back bursting untouched through a team’s last line of defense, there are conspicuous illustrations of how a more self-evident, elementary skill can be the turning point of a pivotal game.

On Thanksgiving Day this season, Terry McLaurin, a wide receiver for the Washington Football Team, was roughly 10 yards behind Dallas linebacker Jaylon Smith when Smith intercepted a pass at the Washington 47-yard line and had a clear path to the end zone for a game-tying score late in the third quarter. McLaurin dashed after Smith, and despite having to evade potential Dallas blockers stationed in his way, tackled Smith at the 4-yard line.

The Washington defense then made a goal-line stand that forced Dallas to settle for a field goal. Demoralized, Dallas did not score again as an invigorated Washington rallied for three touchdowns and an easy victory. At season’s end, Washington was in the playoffs as the N.F.C. East champions because it had one more victory than d Dallas and the Giants.

“It was a huge play, just what we needed,” Washington Coach Ron Rivera said of McLaurin’s effort afterward.

The aptitude for superior in-game speed may seem obvious to the naked eye, but in fact trying to figure out which college draft picks or potential free agents possess it in a way that will regularly show up on the field can be tricky. Nonetheless, it is a foremost aim of every N.F.L. team.

“It’s talked about all the time because it is a complex assessment,” said Scott Pioli, the former general manager of the Kansas City Chiefs who was also a top executive with the Atlanta Falcons, New England Patriots and Jets. “We can all see what a player’s pure speed is when he’s running in a straight line in shorts at the league’s combine. But football is not a straight line game, it’s a lot of stopping and starting, it’s change of direction, it’s instincts and angles.”

Pioli said Patriots scouts were perpetually asked to not only report a player’s timed speed, but his “playing speed,” as well.

“The scout’s report might have a player running 4.5 in the 40, but the scout adds that he’s played faster than that,” said Pioli, who is now an analyst for CBS Sports HQ. “Or slower when he has pads on because football isn’t played in shorts.”

There are outliers, and they can get lost, or found, in hours of film study conducted by pro personnel directors. Coming out of college, former Baltimore Ravens linebacker Ray Lewis was considered fast but was not necessarily projected to become the game-changing presence he turned out to be. Three linebackers and eight other defensive players were taken ahead of him in the 1996 draft. Wes Welker, a 5-foot-9 wide receiver who played for five N.F.L. teams and ranks 22nd in career receptions with 903, was not even invited to the N.F.L. scouting combine and went undrafted in 2004.

“Lewis played much faster because of his intelligence, which helped him to read opponents’ tendencies,” Pioli said. “Undersized receivers like Welker, they also play faster because of their quickness. You have to look for all those attributes.”

Teams are increasingly using tech help to recognize and verify those unique qualities. But it doesn’t always work as intended.

With radio-frequency identification chips (RFID) placed in every N.F.L. player’s shoulder pads transmitting streams of data, pro personnel directors now have a trove of data at their disposal. The same information is also logged during practice sessions. Much of the same information is collected on players before the college draft. After Philadelphia Eagles general manager Howie Roseman took wide receiver Jalen Reagor with the team’s first-round choice in 2020 he talked about Reagor’s RFID numbers and on-the-field speed.

“You get the GPS numbers on these guys, so you can see how they’re running in games and their speed in games,” Roseman said of Reagor, who also ran a swift 4.47 second 40-yard dash. “He’s running at a really high level.” 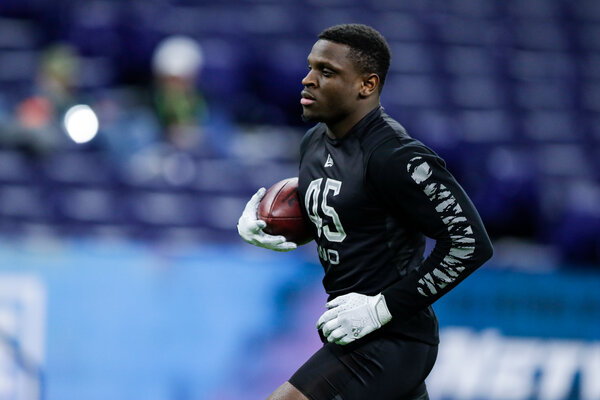 Reagor was viewed as a disappointment this season for the Eagles, especially for such a high draft pick. He had 31 receptions this season for 396 yards and a touchdown, although he did miss five games to injury. Exacerbating the appraisal of Reagor was the 1,400 receiving yards (a rookie record) and 88 catches accumulated by Minnesota’s Justin Jefferson, who was selected 22nd overall in last spring’s draft, one spot after Reagor.

Last week, Roseman conceded there were lengthy deliberations about draft-eligible receivers like Jefferson and Reagor. “Definitely a lot of opinions on this draft class and this receiver class for sure,” he said.

While not specifically speaking about Philadelphia’s decision-making, Pioli said that leaguewide there were obstacles internally that impede teams from making the most fruitful judgments. Notably, a front office schism can stand in the way of a cooperative marriage between staffers who compile analytical data and coaches and other evaluators who are more likely to trust their eyes after in-person tryouts and hours of traditional film study.

“This comes in when one of those two worlds, whether it’s the football people or the analytics people, don’t have enough respect for the other,” Pioli said. “Egos get in the way of arriving at the best answer.”

Steve Gera, an ex-coach, scout and executive with the San Diego Chargers and Cleveland Browns, founded a company, BreakAway Data, with David Anderson, a former N.F.L. wide receiver, in part to help facilitate the divide between a team’s analytic resources and parts of the organization that came up through more customary football channels.

Using wearable sensors, Gera and Anderson have developed isolated, football-specific tests for athletes that they have tried out on college campuses and in the X.F.L. “Then, we processed that data essentially into coach-speak,” Gera said, explaining that the information must be presented in a way that matches the nuanced level that coaches and scouts view the game. “That gets you closer to bridging the gap between stopwatch speed and competitive speed.”

Gera, who has worked with franchises in multiple sports, including the Los Angeles Dodgers, added: “You can tell a football coach that one of his players moves at 22 miles an hour, but what really matters is how much space did the player create or take away on the field, right? That’s the name of the game.”

Seven years ago, Belichick, who has been effusive on the game speed versus timed speed subject for more than a decade, invited an undrafted free agent cornerback to a tryout at the Patriots practice complex after the 2014 draft despite the player’s significantly inferior 4.62 second, 40-yard dash time. In the audition, Belichick observed an innate quickness on the field and immediately offered a contract.

Later that season, the player, Malcolm Butler, closed the space between him and Seattle wide receiver Ricardo Lockette to make a Super Bowl-clinching interception.

Said Seahawks Coach Pete Carroll of Butler that night: “The guy makes a great play that nobody would ever think he could do.”

END_OF_DOCUMENT_TOKEN_TO_BE_REPLACED

END_OF_DOCUMENT_TOKEN_TO_BE_REPLACED
Recent Posts
We and our partners use cookies on this site to improve our service, perform analytics, personalize advertising, measure advertising performance, and remember website preferences.Ok