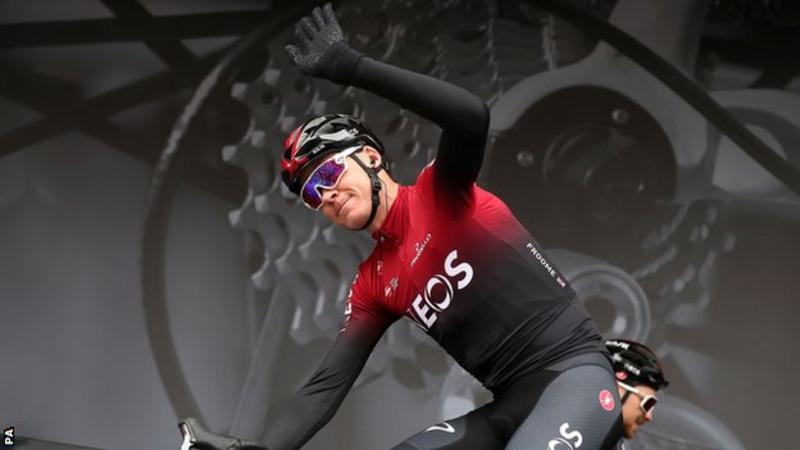 Chris Froome’s six-hour operation following a high-speed crash on Wednesday has been described as a “success” by his team.

Froome is awake and doctors are “very happy with his progress”.

Team Ineos said he will remain in hospital for the next few days.

The crash occurred during a practice ride before stage four of the Criterium du Dauphine in Roanne, France.

Froome took his hand off his handlebars to blow his nose and was travelling at 54km/h when a gust of wind caught his front wheel, causing him to hit a wall.

He was airlifted to St Etienne Hospital for surgery.

“Chris woke up this morning and was reviewed by the intensive care consultants and the orthopaedic specialist who operated on him and they’re both very happy with his progress to date.

“Chris will remain in hospital for the next few days for observation, but he is already actively engaging in discussing his rehabilitation options, which is very encouraging.”

“The surgery was carried out as a semi-emergency to try to avoid any early complications that can develop from that sort of trauma,” he said.

“Now recovery is going to be long. Roughly speaking, you are looking at a minimum of six months out of competition.

“The objective is not just about getting back on the bike, but on rehabilitating himself for the future.

“On a sporting level, he will need to make an exceptional recovery with the mental capacity required to recover and then get fit again.”

Meanwhile, cycling’s governing body the UCI has announced that 2011 Vuelta a Espana champion Juan Jose Cobo had been found guilty of an anti-doping violation.

That could see Froome, who finished second in the race, retrospectively awarded the victory.

This is a distressing blow for Team Ineos and of course their immediate concern is Froome’s recovery.

But the seriousness of his injuries raises questions over his future and how the team will look to move on from the Froome era.

In the short term it’s simple for Team Ineos. Defending champion Geraint Thomas will be outright leader at this year’s Tour and will have a high-class deputy in Egan Bernal, who was due to lead the team at the Giro d’Italia but broke his collarbone in a training crash.

After that, the team have already sought to secure their future by signing the best young stage racing prospects in Colombian Bernal, compatriot Ivan Sosa, Russia’s Pavel Sivakov and Britain’s Tao Geoghegan Hart. They are also reportedly keen on this year’s Giro winner Richard Carapaz.

Even if Froome never challenges for one again, Team Ineos look well placed to continue their success in Grand Tours.