Pop star turned Olympic hopeful Cody Simpson will take to the pool at the Australian Swimming Championships on the Gold Coast in April in what will be a key step towards June’s Olympic trials in Adelaide.

But the reality of the task ahead of him has started to become blindingly apparent, with the 24-year-old likely needing to slash more than two seconds from his 100m butterfly time if his Tokyo fairytale is to come true. 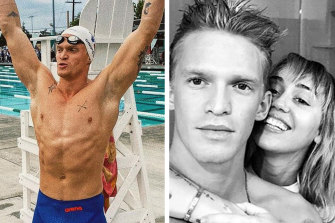 Cody Simpson has done a remarkable job to improve his times but Tokyo could be a bridge too far for the music star and former beau of Miley Cyrus.

Simpson, who once dated Miley Cyrus, has become one of the most intriguing additions to the start list for the event at the Gold Coast Aquatic Centre, which is a key lead-up to the official trials held just weeks out from the Games in July.

A talented junior swimmer who pursued music over sport, Simpson returned to the pool in America as he trained with former Australian sprinter turned coach Brett Hawke.

He told his almost four million social media followers in December that he had clocked 54.9s for the 100m butterfly, which was well inside the qualifying trials benchmark of 56.87s. He has been seeded 13th in the 100m fly at the Championships with a time of 53.85s.

Hawke has said that it will be a four-year process to get Simpson to Olympic level, which means Paris 2024 will represent his best chance of fulfilling what has been a childhood dream. When you look at the progression he would need to make between now and June, you can understand why that would be the case.

The 100m butterfly isn’t a strong event for Australia. The top seed for the Championships is Kyle Chalmers, who is the Olympic champion for the 100m freestyle. His time is 51.34s, ahead of Matthew Temple (51.47s), the only Australian who made the final of this race at the most recent FINA World Championships in 2019.

Australia has extremely tough qualifying marks for the Olympic team, with swimmers having to record a time that would have been good enough for the top eight at the World Championships. Temple finished fifth in 51.51s, with the qualifying benchmark for the trials the eighth-best time of 51.66s.

That’s more than two seconds quicker than Simpson’s seed time for the meeting in April, although he would expected to tighten up his splits as he tapers heading into the main trails in June. So would everyone else, while even Temple, the nation’s best male flyer at the moment, is well off the pace set by American superstar Caeleb Dressel.

As part of his mind-boggling string of swims in 2019, Dressel smashed the world record to hit the wall at 49.66s. Simpson has picked a difficult event on the world stage but perhaps a smart one on the domestic front given the relative lack of depth in the current 100m fly ranks for the men.

Simpson’s presence is sure to add a degree of interest to the racing in April, which should already be intriguing enough given athletes can count their times on the Gold Coast as Olympic qualifiers should any COVID-related issues impact the trials in June.

World champion freestyler Ariarne Titmus will make a return from injury as she recovers from a shoulder injury that saw her miss a lead-up camp on the Gold Coast and the NSW State Open Championships last week.

And Kaylee McKeown will skip her pet 200m backstroke as she throws her hat in the ring for the 200m freestyle, a hugely competitive event that stands to be an excellent chance of gold in its relay in Tokyo. That field will be headed by Titmus and Emma McKeon, who both shape as huge medal threats in Japan.