College Athletes Seek to Use March Stage to Pressure N.C.A.A.

INDIANAPOLIS — As college football players used social media last summer to speak out about social injustice, push the N.C.A.A. to allow them to profit from their fame and campaign for protective health measures (and a return to play) during the pandemic, a small group of basketball players from around the country took notice.

What they observed was how, when the games began in September, the movement largely petered out.

It’s a lesson the basketball players, led by Jordan Bohannon of Iowa, Geo Baker of Rutgers and Isaiah Livers of Michigan, are trying to put to use now in striking a delicate balance: using the enormous stage of the N.C.A.A. tournament to call for change without detracting from a fleeting moment they’ve devoted their athletic careers to fulfilling.

To do so, a group that has grown to dozens of players from at least 15 schools, has used Twitter this week to call for change around a single issue — the N.C.A.A.’s control over their marketing opportunities — through the hashtag #NotNCAAProperty. The players have called for, among other things, a meeting with N.C.A.A. President Mark Emmert, a request that a spokesman for the association signaled Thursday might be granted.

Bohannon declined to be interviewed, according to an Iowa spokesman, and Rutgers declined to make Baker available for an interview. 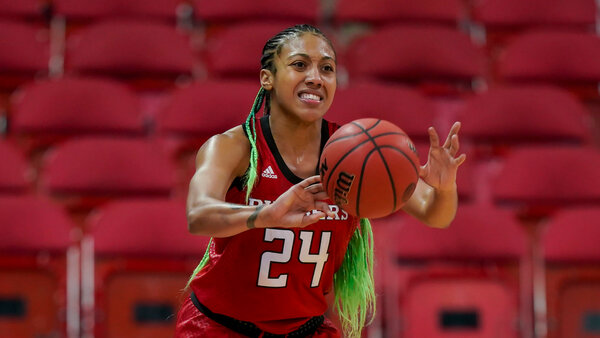 Ramogi Huma, the executive director of the National College Players Association and a players rights’ advocate who has been advising the athletes since last summer, said his group had long planned a social media campaign during the men’s and women’s basketball tournaments, which are worth more than $850 million in television rights.

Players themselves ultimately decided to join.

“As the tournament got closer, they started talking more about using the platform to try to help advance college athletes’ rights, especially this year with all of the different moving parts,” Huma, a former U.C.L.A. football player, said.

Through a videoconference, he met on Tuesday night with about a dozen players who by then were ensconced in their hotel rooms in Indianapolis.

“What the players really started talking about was affecting future generations, the fact that peoples’ rights were hanging in the balance,” Huma said.

By Wednesday, the core players began reaching out to others — including women who would be heading to Texas for the 64-team tournament that begins on Sunday. Baker, the Rutgers senior, asked Arella Guirantes, the senior leader of the Scarlet Knights’ women’s team, if she wanted to be involved.

“It just drew me in because they were all united,” Guirantes said in an interview on Thursday. “Seeing people compete all the time, you’d think they wouldn’t want to unite like this.”

“I don’t think anybody wants to risk boycotting any games,” she added. “I think it’s just about putting pressure on people who are involved with making decisions. This is not something we’re going to be quiet about. We’re going to put the pressure on the people to do what we feel is right.”

What has irked athletes’ rights advocates is the N.C.A.A.’s decision in January, apparently provoked by the misgivings of the Justice Department in the final days of the Trump administration, to delay indefinitely a vote on new rules that would loosen the restrictions on athletes’ ability to cash in on the use of their fame through social media followings or advertising coaching lessons, just as any other student could do.

They saw the N.C.A.A.’s move as little more than another delaying tactic — an outcome Emmert said he anticipated when he recommended postponing action.

Asked this week when the association would be ready to hold a vote, Emmert replied: “A.S.A.P. is the desired outcome.” Donald M. Remy, the N.C.A.A.’s chief legal officer, noted that the original proposal would have taken effect at the start of the 2021-22 academic year and added, “Hopefully, we may be in a position to still make that happen.”

That would potentially meet one of the basketball players’ demands: to have such changes in place by July 1. In addition to asking for a meeting with Emmert, they are seeking meetings with state and federal lawmakers to discuss physical, academic and financial protections, and a favorable Supreme Court ruling in an upcoming case about caps on education-related benefits.

Bob Williams, an N.C.A.A. spokesman, said in a statement that Emmert met regularly with players and that he “would be happy to connect either virtually or in person when appropriate with any student-athletes who want to engage.” And Dan Gavitt, the N.C.A.A.’s vice president of basketball, said Thursday that the organization and its member schools were supportive of athletes practicing advocacy on these topics.

“I personally respect the student-athletes in this tournament for using the opportunity and platform that they have earned through their outstanding success on the court and in the classroom to be here,” Gavitt said.

Gavitt was not so conciliatory when it came to such actions during the tournament, like one that Michigan players had organized but never followed through with at the 2018 Final Four — skipping the open practices on the day before the semifinals with the other participants, Loyola-Chicago, Villanova and Kansas.

“I would be concerned about any potential disruption of games,” Gavitt said.

The calculation for the players is also fraught. Who knows if those leading the protest will advance past the first round, let alone reach the Final Four in two weeks? And there is a likelihood that discussions within a team about what steps to take next would not be unanimous, and worse yet might be contentious enough to leave a locker room divided and distracted.

“I can see some delays” of games, said Livers, who acknowledged that players had talked about how their teams’ tournament fates could influence the course of their campaign. “I can see a lot of that — there’s definitely plans ahead. I don’t want to break the news, but we’re going to use our voices, our actions.”