Connor Fields, the defending BMX gold medalist, goes out in a crash. 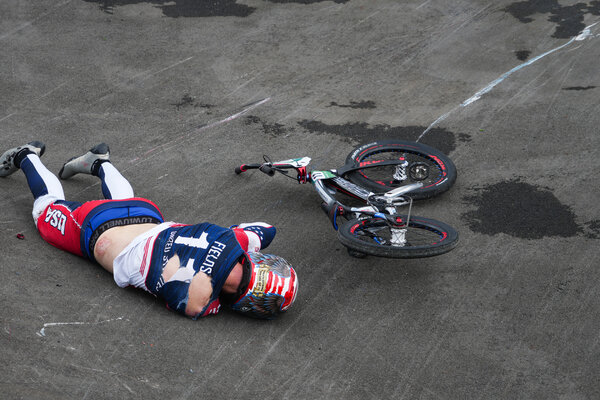 TOKYO — There can be a grim randomness to a BMX race, even at the Olympics. No matter how well a cyclist rides, a crash, a bump or even a small skid can kill the chance for a medal.

Connor Fields of the United States, the defending gold medalist, was in excellent position after finishing third and first in his first two semifinal heats. But near the lead again in the third heat, he clipped the wheel of the rider in front and went down in a nasty three-bike crash.

Medical personnel attended to Fields for several minutes before he was carried from the track on a stretcher and taken to a hospital. A U.S. Olympic official said Fields was “awake and awaiting further medical evaluation.” Even though he didn’t finish the heat, he would have had enough points to race in the final had he been fit to.

The men’s winner was Niek Kimmann of the Netherlands, the world champion in 2015 who finished a disappointing seventh at the Rio Games a year later. Kimmann made headlines this week after crashing into an official who had wandered onto the course during a training run.

“The last weeks, I’ve felt in the best shape ever,” Kimmann said. “Of course, there was a lot of pressure, but I was confident. And then I hit that official, and I felt like my dream was over. But luckily, with painkillers, that dream was still alive.”

On the women’s side, Bethany Shriever of Britain managed to transcend the randomness, winning all three of her heats and then the final. As she completed her 44-second run, her countryman Kye Whyte, fresh off a silver medal in the men’s race, vociferously cheered for her, then lifted her off the ground in a bear hug as she put her hands to her face in disbelief.

Shriever, who was not even a projected finalist, had turned to crowdfunding to support her career in 2019 after the British sports authorities decided to focus their financing on male BMX riders because their results had been better.

“I kept my cool today, kept it simple, and it worked,” she said.

Crashes in both the first and third women’s heats ended the hopes of Alise Willoughby of the United States, the reigning silver medalist; her third-place finish in the second heat was in vain.

The races were delayed for 45 minutes after a downpour soaked the track. A dozen workers valiantly used industrial blow dryers and squeegees to sop up some of the moisture. But riders said they did not think the wetness contributed to the crashes.