Suppose that sometime during 2013, a leading Sydney thoroughbred trainer was paid an unannounced visit by the stewards. Say the purpose of the visit was to collect samples from some of the horses under the trainer’s tutelage. The stewards select some horses at random, get some blood, and then depart. Suppose the samples are analysed, and one or two horses are shown to have in their systems a substance prohibited under the Australian Rules of Racing.

Suppose that the trainer – who to that point was a “cleanskin” – can’t identify how the substance got into the horses’ systems. Could’ve been bad feed, incorrectly labelled but legal supplements or the malevolence of colourful racing types. 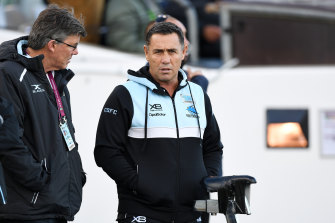 Shane Flanagan is banned from taking the top job with an NRL club until next year.Credit:NRL Photos

The trainer would be looking at a holiday calculated in years – could be two, could be three. Could be more, but it’s exceptionally unlikely that the period of disqualification would be any less.

Note also, that the concept of “disqualification” in horse racing is broad. Not only is the disqualified trainer banned from plying their trade – they also can’t own a horse, be involved in breeding or even open a Sportsbet account. A disqualified person can’t go to the races, anywhere.

So say that the trainer was disqualified over these offences. Say the ban was for the minimum two years, ending at the end of 2015. Say then that the trainer returned in 2016, with some success and with very good behaviour. But what if it’s latently discovered that, for the duration of the disqualification, the trainer was surreptitiously thumbing their nose at the ban and its ramifications?

Sure, the trainer wasn’t actually entering horses to race, but was involved in breeding yearlings, occasionally sneaking into meetings and training by stealth. Say that although some other trainer had taken in their horses, the real decisions were being made by the disqualified person throughout their enforced holiday.

While racing would cease to exist in the absence of integrity structures, league might survive but its systems should be any more malleable.

Suppose then that the stewards uncovered evidence of these shenanigans, and promptly speared the trainer again. This time the trainer was disqualified for three years, with the penalty ending at the end of 2021.

Fast-forward to now. Say an opportunity has arisen whereby that person had the opportunity to take over a whole stable of out-and-out champion thoroughbreds. Say also, that if the disqualified person didn’t take the reins right now, he or she would be passed over.

In those circumstances, answer me this: if that twice-banned person had, during the partly-served second period of disqualification, done everything demanded of them, should Racing NSW yield? Should it truncate the penalty so the trainer can accept this “chance of a lifetime”?

Of course there’s no point ruminating over it. It would simply never actually happen. Especially when the subject has previously shown serious and patent disregard and disrespect for penalties handed down.

Nor should it happen in rugby league. While racing would cease to exist in the absence of cast-iron integrity structures, rugby league might survive but it doesn’t follow that league’s systems should be any more malleable.

I fail to understand how it could be speculated that the door might be even slightly ajar for Shane Flanagan to return to a head coaching role this year should one become available. If the NRL stands for anything, it must stand for the integrity of its own decision-making. In September 2019, it decided that Flanagan – by that time deregistered by the NRL – would be eligible to be registered as an assistant coach only for seasons 2020 and 2021. The NRL’s own statement concluded, by saying that Flanagan “has been told the NRL will give no consideration to expediting his return to a head coaching role beyond today’s decision”. Similar sentiments were expressed in 2020, the last time we were forced to confront this question.

If it’s true that the NRL would even contemplate retreating from this unequivocal stance, I cannot fathom why.

The watering-down of previously-imposed sanctions wouldn’t happen in racing; it shouldn’t occur in any elite, professional sport. And if commuting sanctions did become a common and accepted practice in rugby league then, frankly, Flanagan isn’t the participant who should be showered with such kindness.

In the week prior to Christmas in 2018, the NRL announced it intended to cancel Flanagan’s registration, where being registered is a prerequisite to being employed as a NRL head coach. The next month, Flanagan resigned from his position as head coach of the Cronulla Sharks. 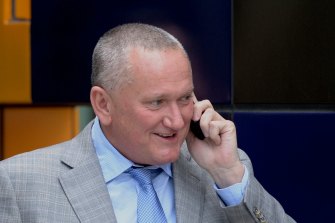 Flanagan was deregistered in late 2018 because it had been discovered, earlier that year, that he had actively ignored the basic conditions of a ban imposed in 2013. That earlier sentence demanded he have nothing whatsoever to do with the Sharks in 2014. In that instance, Flanagan was suspended for breaches that strike at the very core of the responsibilities of a head coach.

In 2013 the NRL – at the conclusion of its own investigations – made serious and damning findings about the manifest failures of Flanagan, his club and others. Those findings related to a deliberate but feeble scheme of administering nasty substances and supplements to the Sharks players, in medically dangerous circumstances, where players were exposed to significant and unacceptable health risks.

The Supreme Court of NSW found that Stephen Dank (a) had administered drugs to players, such drugs that were banned in sport by the World Anti-Doping Agency; (b) had administered dangerous and cancer-causing supplements to players; (c) had, by so doing, engaged in absolutely indefensible conduct; (d) had acted with reckless indifference to the life of one of those Cronulla players, because he administered untested substances to that player while he was in remission from cancer; and (e) had accelerated that player’s eventual death, from that cancer.

Succinctly put, there’s been no greater abhorrence inflicted on Australian sport than Dank. The head coach under whom Dank operated was Flanagan. I get the distinct impression that Flanagan still doesn’t appreciate just how horribly he failed in discharging his responsibilities during the time of Dank’s involvement at Cronulla.

Generally, everyone in life deserves second and even third chances. Shane Flanagan should be treated no differently, and if a head coaching opportunity should present itself in the NRL for season 2022 or beyond, then good luck to him.

None of this is intended to permanently destroy Flanagan’s chances of working again at the highest level. It would, however, convey entirely the wrong message for the NRL to relax or waive the already quite lenient sanctions. It wouldn’t happen in horse racing and it shouldn’t happen in footy.

Sports news, results and expert commentary delivered straight to your inbox each weekday. Sign up here.

END_OF_DOCUMENT_TOKEN_TO_BE_REPLACED

What is a state funeral and will Captain Tom Moore get one?

END_OF_DOCUMENT_TOKEN_TO_BE_REPLACED

A sick killer who poured sand down a child's throat has applied for parole. The move has sparked a warning from the detective who helped jail Robin Reid, branding him the "most perverted evil human I have ever come across". Now-retired, Ian Spiers is certain Reid "will kill again" if