AN ASTON Villa fan "broke his pelvis and ankles" after falling 20ft from a stand at Wembley Stadium during England's opening game of the Euros.

Horrified witnesses saw the fan fall just before the Euro 2020 game between England and Croatia kicked off at 2pm on Sunday. 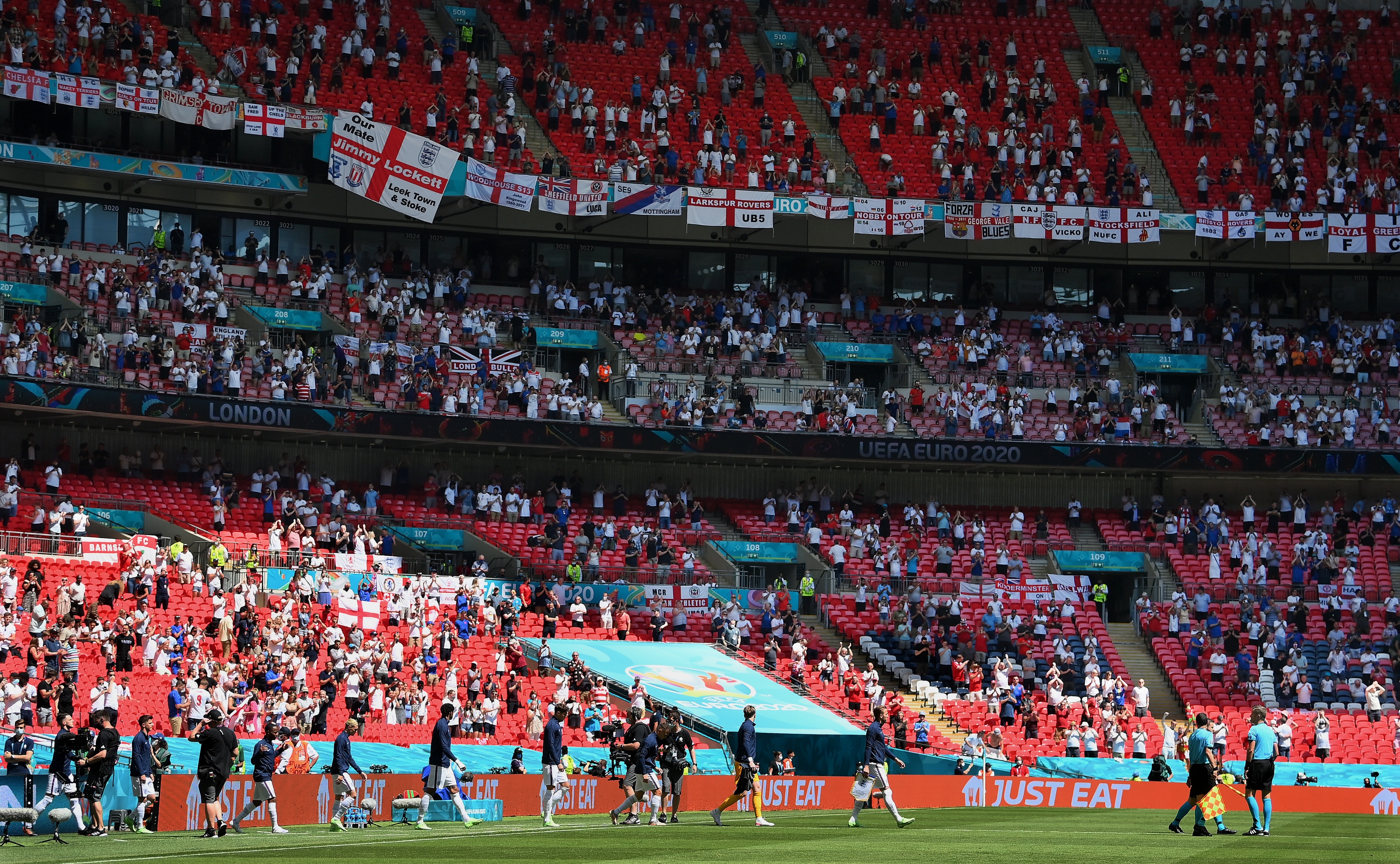 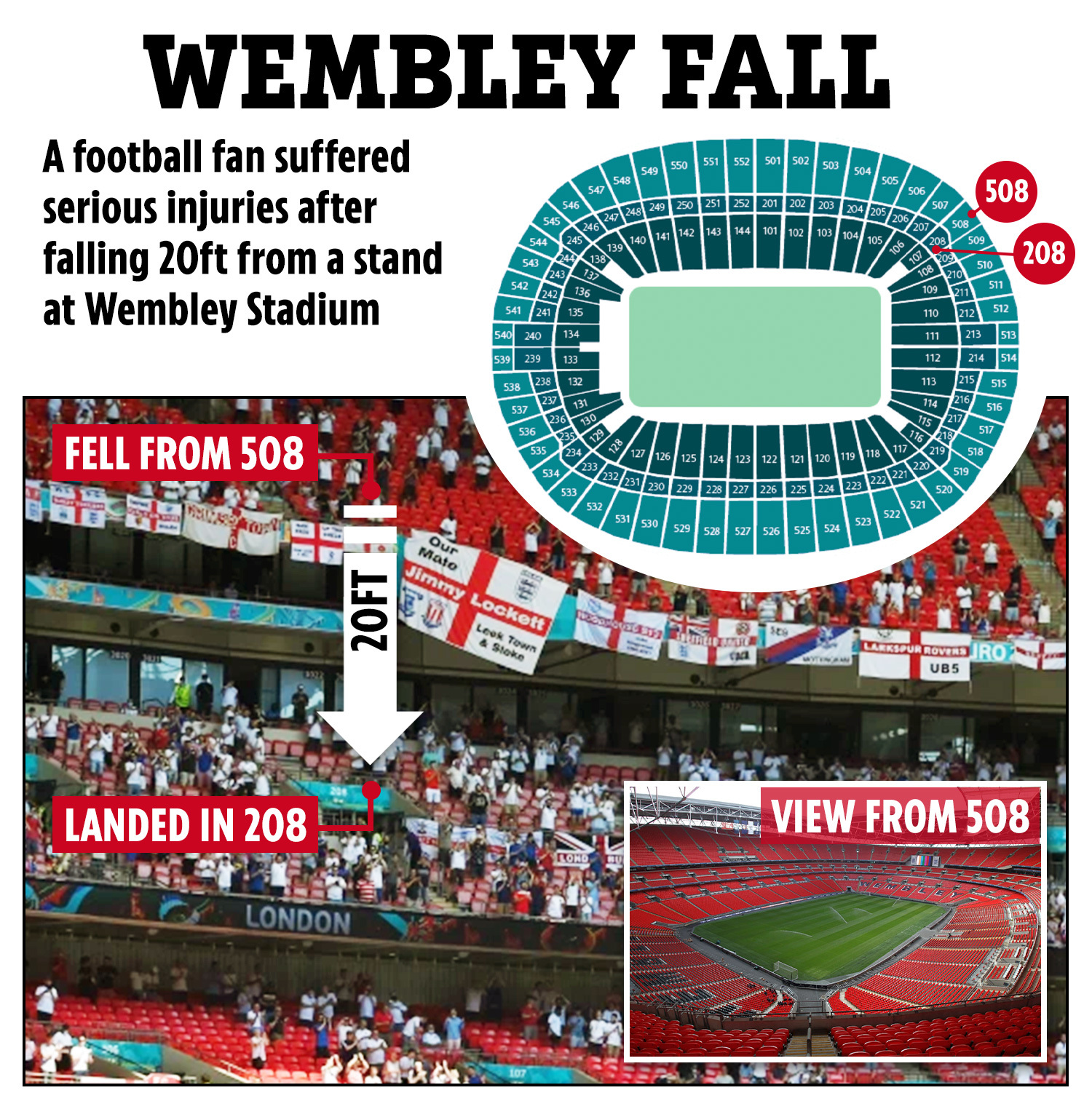 The man, known as Jon, is a Villa supporter who suffered two broken ankles, a broken femur and a fractured pelvis, his pals said.

The friends told Birmingham Live that the man was trying to put a St George's flag on the railings at the stadium when he fell.

Jon was rushed to hospital and has reportedly undergone a series of operations.

He is now recovering well, and has received dozens of messages of support.

One said: Horrible news, Let's all pray for him. One of the Villa loyal."

Another said: "I went to school with him, he's such a lovely lad."

A supporter at the stadium said the fan fell directly in front of him – having plunged 20ft from the third level of the stadium onto the concrete on the second level.

The supporter who saw the fall told The Sun Online: "It was awful to witness.

"It happened after the national anthem but before the players took the knee, so probably one or two minutes before kickoff.

"He fell from the upper tier into 208 in the middle tier. When he fell an off-duty firefighter got to him within seconds.

"We were trying to get stewards and medical professionals on scene."

The fan claimed it took at least five minutes for the man to receive any medical attention.

"The stewarding was absolutely awful, no urgency," he said.

An England fan told the Evening Standard: "We saw his legs go over the barrier and then he fell and hit the ground and didn’t move.

"It seemed to take staff ages to get to him. One guy near us who saw the whole thing was crying his eyes out."

Another fan said: "I didn’t see it but spoke to some of the guys who did at half time. They were traumatised. He fell from the balcony towards the seats and the concrete."

A Wembley Stadium spokesperson said on Sunday: "We can confirm that a spectator fell from the stands just after kick off in the match between England and Croatia at Wembley Stadium.

“The spectator was given on-site medical attention and was then taken to hospital in a serious condition."

The spokesperson said UEFA was investigating the incident.

The Wembley spokesperson said: "We will continue to work with UEFA to ensure the matter is fully investigated and we are continuing to monitor the situation."

There were 22,500 fans at the stadium to watch England win the game after a nail-biting first half that saw Phil Foden hit the post.

A loud roar rang out as Raheem Sterling scored the vital goal in the 57th minute.

Fans had been hoping England would get their revenge after Croatia's goal in extra time of the semi-finals sent England packing at the 2018 World Cup.

Supporters inside Wembley erupted in cheers as they watched the Three Lions win their first-ever opening game.

They had earlier drowned out a small minority who booed at players taking the knee.