Thousands descended upon Alexandra Palace for the World Darts Championship but had to verify their Covid status first before arriving to the arena as the dangers of Omicron increased.

A full crowd of 3,000 spectators were in fine voice as the annual spectacle took place in north London – with the same numbers expected for all 28 sessions across the ensuing days of action.

Despite the increasing threat of Covid, fans were in good spirits as many upheld the tradition of fancy dress. 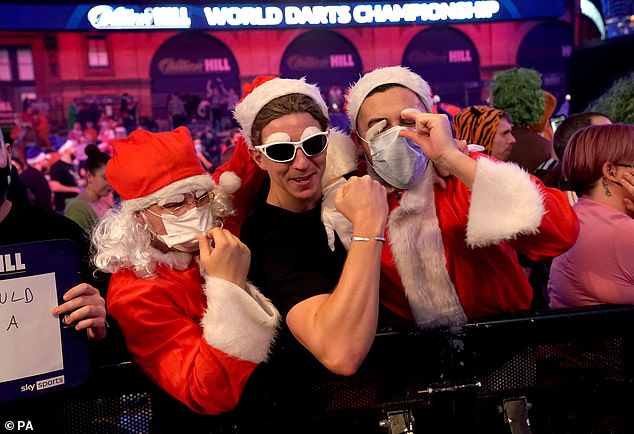 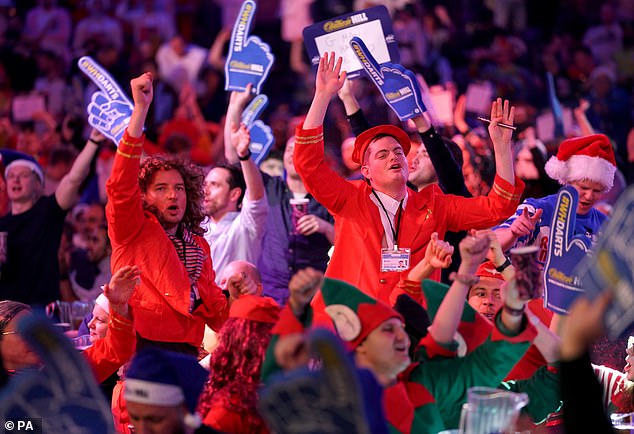 Despite the increasing threat of Covid, many were in fine voice as they enjoyed the darts 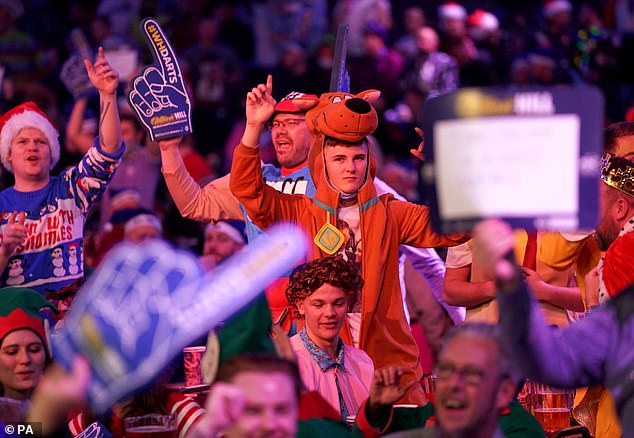 Some dressed as Father Christmas, with a face mask accessory, to get in the festive spirit.

Others dressed as Scooby Doo, among various fancy dress costumes, as they forgot about the fear of Omicron for a few hours at least.

As of Wednesday, all individuals attending Alexandra Palace must produce an NHS Covid Pass upon entry. That includes proof of full vaccination, proof of natural immunity or proof of a negative lateral flow test taken on the day of the event, under Plan B arrangements.

The rules, which only came into force this morning, following a rancorous vote in Parliament on Tuesday night, do not apply to anyone under the age of 18.

They have been drawn up in response to a ‘tidal wave’ of infection caused by the Omicron variant.

The Plan B measures apply to supporters in large stadiums with a capacity of 10,000 or more – which the Alexandra Palace falls due to the sheer size of the whole tournament.

The PDC has warned fans that those unable to demonstrate their current Covid status will be turned away.

Despite the stringent measures, there are still fears that fans could be barred from the event due to tightening government regulations. In that event, Eddie Hearn insists that the show will go on. 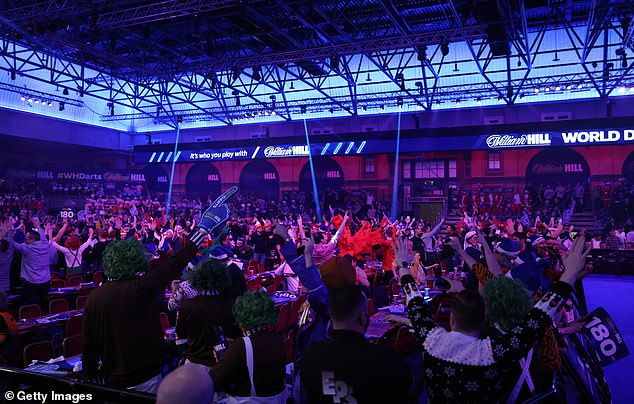 Ticket holders need to demonstrate their Covid status by providing one of the following:

‘If anything happens, firstly we will cry a little bit – and then we will lick our wounds and go to work,’ Hearn, who took over from father Barry as head of the events organisation last April, told the Sun.

‘We are all used to it now as a business. We will always adhere to the government rules.

‘We will make sure it’s a safe, friendly environment for our customers and we will adapt if needed to under any rule change.

‘If we have to adapt in the circumstances – whether that is distancing, implementing masks in the venue or reducing the crowds – we have the expertise to do all of that.

‘It would be a real shame because we missed it last year and it is back in full this year. Fancy dress is on the agenda.’

Fans will still have to wear face coverings around the venue, and when seated, with punters only permitted to take them off while eating or drinking.

And those on Wednesday witnessed defending champion Gerwyn Price survive a scare to come from behind and beat Ritchie Edhouse 3-1 to move into the third round.

The Welshman had won the title with victory over Gary Anderson in the 2021 final, which was played behind closed doors in January.

The walkout proved a somewhat frosty reception for the Iceman from the crowd, back at the Palace for the first time in almost two years. 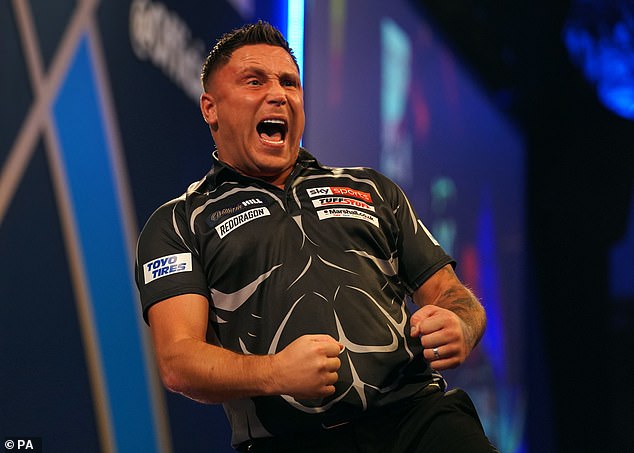 Edhouse – who earlier edged out Peter Hudson 3-2 in the opening match of the tournament – swiftly turned up the heat on Price, whose finishing was off target as he lost the first set 3-0.

Price levelled by edging the second on a deciding leg, and then took out 130 to claim the third set and move ahead in the match.

The world champion continued his momentum, moving 2-0 ahead in the fourth set and went on to secure what was in the end a comfortable victory with a sixth straight leg.

Price – who will now not play again until after Christmas, when he could meet Fallon Sherrock – said on Sky Sports: ‘I don’t know about a scare, but I let myself down in the first set, missed doubles and put myself under pressure.

‘The two 130 shots out sort of won me the game, and I think I played particularly well in the latter stages after slipping up earlier.’

On the reception from the crowd, Price said: ‘They are definitely back. I hope these (Covid restriction) rules change over the next couple of weeks and I can go win this again.

‘It was good today and as long as the other player is still in the game, that is the way the crowd is going to be.

‘I need to be more clinical, ruthless and take my chances, just shut them out of the game.’ 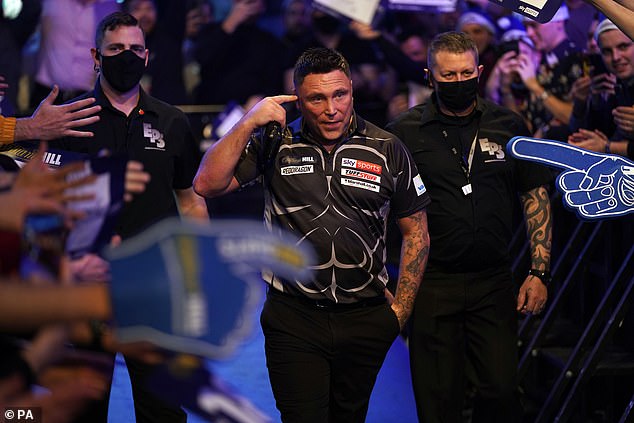 After Campbell, nicknamed the Ginja Ninja, had taken the opening set, ‘Jackpot’ Lewis rattled off three straight legs to level the match.

Lewis, world champion in 2011 and 2012, then broke throw to take the third set and landed two more 180s as he claimed the fourth set on a deciding leg.

Ricky Evans coasted past Indian qualifier Nitin Kumar, landing checkouts of 167 and 130 as well as four maximums in a 3-0 victory to book his place in round two.

Earlier, Edhouse had secured his shot at Price after beating Hudson 3-2.

Hudson had replaced Lihao Wen in the main draw, after the PDC China champion was forced to pull out on the eve of the tournament because of a delay in receiving his visa.