Home » Sport » For Some Veteran Stars, NASCAR’s Appeal Is Fading

For Some Veteran Stars, NASCAR’s Appeal Is Fading

AVONDALE, Arizona — When the checkered flag falls on Sunday at Phoenix Raceway for the final race of NASCAR’s 2020 Cup Series, it will also fall on the stock car career of one of its most decorated drivers, Jimmie Johnson, a seven-time champion.

Johnson is a part of a wave of retirements in recent years that has carried away NASCAR’s marquee stars like Dale Earnhardt Jr., Danica Patrick, Tony Stewart and Jeff Gordon. Many longtime second-tier stars, such as Clint Bowyer, Greg Biffle, Michael Waltrip, Jamie McMurray, Kasey Kahne and Carl Edwards, have ended their careers, or are now ending them, as well.

With Johnson gone, NASCAR’s elder statesmen will be Kevin Harvick, 44, and Kurt Busch and Ryan Newman, who are both 42 and are the only two drivers remaining in the sport who started before Dale Earnhardt Sr. died in 2001.

The drivers who have stepped away cited health concerns, changing consumer interest in the sport, challenging economics, new rules and radically different schedules. Johnson, for one, wants to keep racing, but he may do it in the IndyCar Series.

NASCAR has made significant changes in recent years: breaking races into segments, awarding points differently and designating the final third of a season as a playoff elimination tournament.

Johnson gave an upbeat reason for retiring: “I’m fulfilled,” he said. Certainly, his list of accomplishments in the sport needs no embellishment: 83 Cup victories — sixth on the career list — and a record-tying seven top driver titles.

Johnson, at 45, is still competitive, fit and relatively unscathed physically from 21 years of banging fenders and trading paint at NASCAR’s premier level.

“But it’s a grind,” admitted Johnson, who is the oldest full-time driver in the series.

By traditional NASCAR standards, Johnson is hanging up his helmet much earlier than did the other seven-time champions: Richard Petty raced until he was 55; Earnhardt Sr. was going strong at 49 when he died in a wreck; Darrell Waltrip retired at 53, after 28 seasons in Cup racing; Cale Yarborough also raced 28 seasons.

Johnson said he thought two decades was plenty. “It seems like a more common number for a career these days,” he said. “I don’t think you will see guys racing at this level for 25, 30 years anymore.”

Off the track, the most popular drivers, like Johnson, are also swamped with commitments to sponsors, the press and social media. The scramble for sponsor money has become almost as intense as the racing on the track; losing deep-pocketed longtime backers like Home Depot, Lowe’s, DuPont, GoDaddy and Budweiser dented the income potential for stars like Stewart, Johnson, Gordon, Patrick and Earnhardt Jr.

For midlevel racers, in Earnhardt’s estimation, the income hit has been worse — up to 90 percent.

Gordon acknowledged that some drivers would rather retire than “take a step back” in what they are paid.

“I assure you, though, there are still guys being paid tens of millions to drive these cars,” Gordon said. A select group, to be sure, that might include Harvick, Kyle Busch and Chase Elliott. He added, “Talent still matters.”

But there is no shortage of up-and-coming talents hankering to drive for a fraction of the previous going rate.

Ominously, wrecks are a growing concern — not only for the ruinous economic toll on financially challenged teams, but also for the physical toll on drivers. It’s the era of the multicar crash, the Big One, when NASCAR’s close-quarters racing can result in chain-reaction melees.

Repeated head injuries caused Earnhardt Jr. to step back after 18 Cup seasons. Patrick estimated she had “more than a dozen concussions” in her crash-plagued career; diminishing results also cost her sponsorship. Gordon, who retired at 44, said worsening back pain helped push him into the Fox Sports broadcast booth.

“I was starting to think about, more and more, what kind of life I wanted to have off the track, after racing,” said Gordon, who is married with small children. “Especially what I could do on the business side.” Gordon has gone into business with his longtime car owner Rick Hendrick and is a part owner of Johnson’s No. 48 racecar.

“You look at it at a certain point, and have to say to yourself, ‘There’s more to life,’” said Johnson, who also has a young family. “I’m not into fishing or golf. I’ve met — exceeded beyond my wildest dreams, really — every goal I ever set for myself in NASCAR. Actually, my original goal was to win a Cup race — one race! When I did that, in just my 13th start, I realized, ‘I need to set some new goals!’”

Unlike NASCAR’s other recent retirees, Johnson has decided he wants to keep racing, just not Cup cars.

“I got a chance to drive a Formula 1 car in Bahrain awhile back, and it made me realize: I could do this,” he said. “That opened my eyes to a whole range of possibilities. Watching Fernando Alonso at Indianapolis also inspired me.”

Recently, Johnson was invited to test one of Chip Ganassi’s IndyCars. The results were promising enough that he was offered a two-year contract to campaign IndyCar road races. He is also now considering testing on the oval tracks too, with an eye on a possible Indianapolis 500 drive. 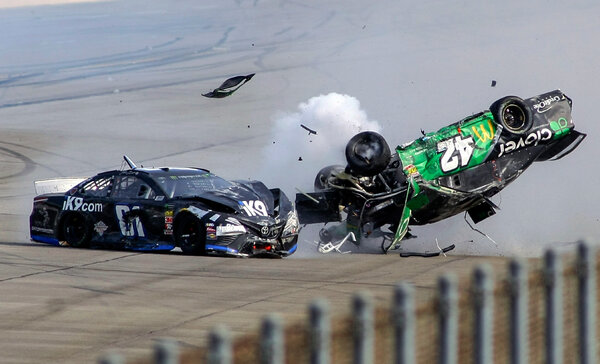 After another test session on Monday, Johnson said he was so far lacking the “bravery and aggression” necessary to become a front-runner. But, he added, “it’s coming; it’s going to be a real steep learning curve for me.”

Johnson, from El Cajon, Calif., said he originally aspired to race IndyCars. So did others, including Stewart, Gordon and Kurt Busch, who also ended up in NASCAR. But a damaging rift in IndyCar racing 25 years ago spoiled the earning potential for decades.

“That’s now changing,” Johnson said. “The gap is narrowing, which helped make it feasible for me to try the switch.” IndyCar’s safety advances have also helped allay Johnson’s fears.

Johnson acknowledges that he could have returned to NASCAR next year, to try again for an eighth crown, his original goal before his ultimately disappointing 2020 campaign.

He would not rule out racing a NASCAR stock car again, for a special occasion. But if he does, he will be with a different team, like Ganassi, which runs only two cars, rather than Hendrick, which is fielding a full stable of four.

Not every driver makes his retirement decision by weighing every factor. Some years ago, a reporter asked Stewart, a three-time Cup series champion, if he had considered how much longer he might race before retirement. “I’ll quit when it’s not fun anymore,” Stewart said gruffly, echoing an answer that his taciturn idol, A.J. Foyt, once gave.

After Stewart retired from NASCAR in 2016, the same reporter asked Stewart why. “I think I already answered your question,” he responded.

END_OF_DOCUMENT_TOKEN_TO_BE_REPLACED

END_OF_DOCUMENT_TOKEN_TO_BE_REPLACED
Recent Posts
We and our partners use cookies on this site to improve our service, perform analytics, personalize advertising, measure advertising performance, and remember website preferences.Ok