Home » Sport » For U.S. and Its Coach, a Low-Key Start to a High-Stakes Month

For U.S. and Its Coach, a Low-Key Start to a High-Stakes Month

REIMS, France — On Monday night, a little more than 24 hours before the United States was scheduled to meet Thailand in its first match of the World Cup, the American captain Alex Morgan and Coach Jill Ellis were answering questions at a packed news conference inside the Stade Auguste-Delaune.

After a benign first few minutes, the room tittered when a journalist picked up the microphone and wondered how Morgan and the team were approaching the defense of their 2015 World Cup title, “because,” as he noted, “in a few weeks time you could be the former world champions.”

“O.K.,” Morgan said after a comically contemplative beat. “Thank you for that.”

Ellis, sitting to Morgan’s left, laughed: “Slight negative tone on that one,” she said.

Still, all joking aside, Morgan seemed to grasp the implications of the question.

“The process has been a long one,” Ellis said about the four years since her team won the last World Cup. “But I think the players we’ve selected and our preparation has been excellent.”

It has been at times a bumpy, taxing road from Canada four years ago, when the United States lifted the World Cup trophy in Vancouver, to kickoff on Tuesday in northeastern France.

The first sign that defending their title might prove a complicated task came early, the following summer in 2016, when the United States tumbled out of the Olympic Games in the quarterfinal round. It was the earliest they had ever exited a major tournament, and the first time the United States had failed to medal in the Olympics. It stung.

“I never want to feel the way that I felt after that tournament,” Morgan said last week.

If that loss, to Sweden, symbolized one of the emotional low points of the team’s proud history, it served, too, as a wake-up call. The 2015 World Cup had proved that the United States had vulnerabilities — “not a smooth ride,” Ellis said of that tournament — and the Olympics proved soon after that teams were getting savvier in exploiting them. 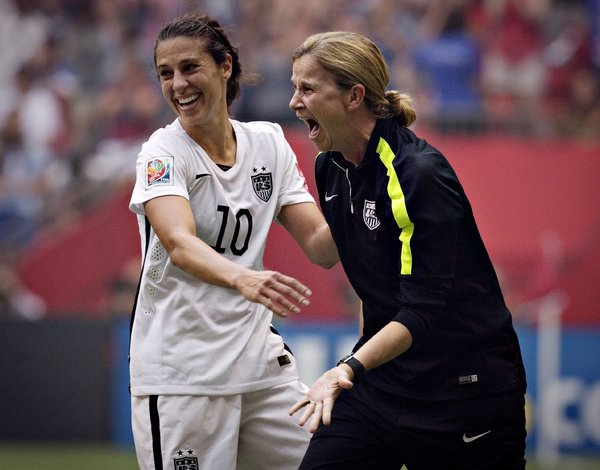 So the Americans would have to get savvier, too. Thus began a period of experimentation, tinkering and auditioning, with growing pains and up-and-down results and plenty of uncertainty.

To start, Ellis changed the team’s formation from a 4-4-2 to a 4-3-3, which she said highlighted the squad’s front-line depth.

And she also doubled down on tactical preparation — Morgan noted some training sessions over the past few months had felt 80-percent-focused on tactics — after realizing other teams were getting more sophisticated, with first and second and third options for neutralizing the Americans’ attacks.

She called, by her estimation, almost 60 new players into various training camps. (In the end, however, she selected a group that emphasized experience. With an average age of 29, the United States is the oldest team at this tournament, and 12 of the players are holdovers from the 2015 squad.)

The efficacy of all that tinkering will be put to the test over the course of the next four weeks. The stakes for the team, whose incomes and professional and national team futures will be affected by the result, are high. The stakes for Ellis individually thus are enormous, too. And it’s not just lifting the trophy on her mind; Ellis’s next contract with U.S. Soccer, which comes up for renewal every four-year World Cup and Olympic cycle, most likely rides on the team’s performance in France.

Ellis said she welcomed the scrutiny.

The team, she noted recently, was already ranked No. 1 in the world when she was hired in 2014. So pressure — the all-encompassing weight of long-term excellence and tradition, not to mention a multiyear fight with U.S. Soccer that continues in the courts — was built into the job description.

“You realize that there was zero margin for error, and you can either just wallow in that or go, ‘Hell, this is part of the job, and this is what I want to do,’ and take that as a really exciting challenge,” she said.

More than 30 years ago, when Ellis was preparing to start her first coaching job as an assistant at North Carolina State, her father gave her a piece of advice: “You’re not a coach unless you’ve been fired.”

He perhaps also could have told her: You’re not a coach until a former star player of yours denigrates you in the news media.

Over the weekend, the retired American goalkeeper Hope Solo — who has a long, complicated history with the team, having engineered some of its brightest moments on the field and also having been at the center of some of its biggest controversies away from it — made a series of critical comments about Ellis’s effectiveness as a leader to the BBC, which has hired her as a commentator for the World Cup.

Solo said Ellis “cracks under pressure quite a bit” and revealed that she often refused to let the team’s players review video of their defensive mistakes because she was worried it would damage their confidence.

Ellis was asked on Monday if she wanted to respond.

“Comments are comments,” Ellis said. “Listen, I feel over the past five years I’ve made a lot of important decisions. I have processes to make those decisions and own those processes.”

Solo’s remarks were another distraction. The focus, she said, would be internal.

“Pundits are out there,” she said.

After the news conference, the entire team stepped into the stadium to inspect the field, a process that seemed to involve a lot of joking around and taking pictures. Then the players headed to another field for one final training session before facing Thailand.

They said they were eager to get their tournament started. They knew they had targets on their backs. The mood was light.

Andrew Keh is an international correspondent, covering sports from Berlin. He has previously covered Major League Baseball and the N.B.A. and has reported from the World Cup and the Olympics. @andrewkeh