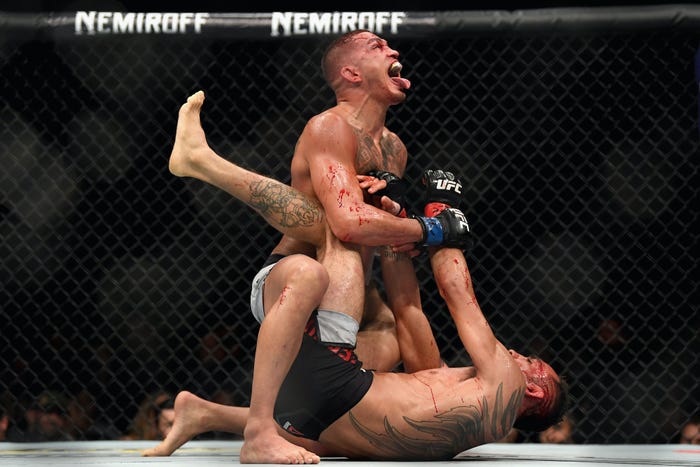 Pettis won the UFC's 155-pound championship when he submitted Benson Henderson with an armbar in 2013, and defended the belt the following year when he beat Gilbert Melendez with a guillotine choke.

He last fought for the UFC four days ago, winning a decision against Alex Morono at a behind-closed-doors show in Las Vegas, and will now prepare for PFL's seasonal format when the New York-based MMA firm restarts operations in April 2021 following a coronavirus-enforced hiatus this year.

"I am excited to announce that the PFL has signed Anthony Pettis," the CEO of PFL Peter Murray said in a statement sent to Insider.

"Not only is Anthony a transcendent athlete within the sport of MMA, but he is also an innovator in the cage who is known for his charismatic fighting style and determination to win.

"We're very excited for him to join the PFL family," Murray said.

The news was broken by the ESPN MMA reporter Ariel Helwani on Wednesday.

Pettis joins Rory MacDonald, Fabricio Werdum, and Claressa Shields as other big-name PFL signings who will make their respective debuts in 2021.

Pettis will compete in the lightweight division and could win a $1 million check should he win the company's high-stakes New Year's Eve championship match, after moving through the 2021 season and playoffs.

"I am really looking forward to this next big challenge after signing with the PFL," said Pettis in a statement sent to Insider.

"I'm super impressed with what the PFL has built, how they are growing the sport, and the amazing talent they have added."

Pettis will be in the same division as the reigning PFL lightweight champion Natan Schulte and Clay Collard, an emergent cult hero in boxing because of his fan-friendly performances throughout the pandemic.

"I've been watching the Brazilian guy Schulte who is the champion and he is really good but there isn't anyone I'm scared of," Pettis said.

"The season format is great; I think it will be an amazing journey for me and to get to wrap it up over the course of one year will be awesome.

"I can't wait to get another world championship to add to my collection."

The fights will take place at a Caesars Entertainment property in Las Vegas like Caesars Palace or Rio, and will be broadcast on ESPN2.

END_OF_DOCUMENT_TOKEN_TO_BE_REPLACED

END_OF_DOCUMENT_TOKEN_TO_BE_REPLACED
Recent Posts
We and our partners use cookies on this site to improve our service, perform analytics, personalize advertising, measure advertising performance, and remember website preferences.Ok